What is a WiFi Adapter and How Does It Work?

Ever wonder how you can surf the web on your PC or laptop without a hard-wired connection? Almost everyone who has home Internet uses WiFi, which enables users to go online by communicating with their wireless Internet router/modem/gateway via radio waves. So, what is a WiFi adapter and how does it work?

Laptops for at least the past 10 or 12 years include built-in (integrated) WiFi adapters. Most of us use them without ever thinking of how they work. A WiFi adapter is essentially a combined radio transmitter and receiver, tuned to unlicensed radio frequencies of either 2.4 GHz or 5 GHz (or both). A laptop uses a WiFi adapter to wirelessly send and receive data from a DOCSIS/DSL router. When combined with a modem, the device is called a gateway.

If you upgraded to a wickedly-hot data speed (say, 100 Mbps or greater) service tier offered by your Internet Service Provider (ISP) but have an older laptop—one that relies on a legacy Institute of Electrical and Electronics Engineers (IEEE) standard—you may wonder why your device still operates at the same speed as before.

The solution is twofold; one, you need a newer router capable of transmitting and receiving 5 GHz bandwidth and/or your laptop needs a newer WiFi adapter to more rapidly process data speed. Trust us—a new WiFi adapter is much cheaper than buying a new laptop or PC.

By contrast, WiFi uses two unlicensed portions of the radio spectrum: 2.4 GHz and 5 GHz. 2.4 GHz lies near the top of ultra-high frequency (UHF—30 MHz-3 GHz) bandwidths while 5 GHz ranks among the lowest super-high frequency (SHF—3 GHz-30 GHz) bandwidths. If you deduce that 5 GHz carries more data than 2.4 GHz, doesn’t travel as far and can’t penetrate material as easily as 2.4 GHz does, you reason correctly.

The first 802.11 standards—802.11a (for 5 GHz) and 802.11b (for 2.4 GHz)—first appeared at the end of the 1990s. Since then, the IEEE has released amendments to the original IEEE 802.11 standard that reflect improved technology and data throughput. Each new amendment released is backward-compatible with previous versions. Major IEEE 802.11 amendments built into OEM computing devices include:

Depending upon the device, computers can utilize several categories of wireless adapters. These include:

Found on laptops, tablets and smartphones, these built-in devices offer unsurpassed convenience with functionality. Yet, since it’s a factory-installed component and not easily accessible (if at all without voiding the manufacturer’s warranty), they usually can’t be updated to the latest IEEE standards. Moreover, antennas (see below) on integrated adapters don’t transmit/receive radio signals as efficiently as external adapter antennas outside a computer’s housing.

Available for all devices save smartphones, they’re (usually) easy to install and use. A USB port, of course, must be dedicated to its use. This can pose problems for those of us who connect several peripherals to our computer; some adapters are large enough to block off more than one port. Fortunately, there’s always a USB port hub. Note that a PC’s rear USB ports are preferred for adapters, as they deliver more power to WiFi antennas.

Many USB adapters are called “dongles“—a catchall term for any small plug-and-play hardware device, such a receiver used with a USB infrared wireless mouse. Remember that smaller or “nano” USB adapters usually require stronger WiFi signals than adapters with external (if unsightly) antennas. But bear in mind that “mobile dongles” refer to USB cellular modems, used to pull in LTE or 3G frequencies instead of WiFi. Know the difference between the two.

Ease of USB adapter installation largely depends upon the availability of software drivers. Some may be as simple as plug and play, with software drivers already available from your computer. Others may need the driver’s software downloaded. While most USB WiFi adapters come with a software CD, it’s a fact that nowadays many laptops lack optical drives.

This WiFi card fits into a slot on a desktop PC’s motherboard. This means that to install it, one must gain access to the PC’s electronic innards. Most PCIe adapters have external antennas that extend from the back of the card to improve the wireless signal range. “Mini-PCIe” wireless cards are used for laptops and notebooks.

If you’re not comfortable cracking open your computer’s housing, PCIe adapters are not for you.

Similar to a PCIe, this adapter is built directly into the motherboard (not a card slot) and integrated into the board as a non-factory accessory. Most use external antennas routed outside the desktop PC housing for better signal strength and less interference.

Another option is to replace your old PC motherboard with a WiFi-enabled motherboard available from Amazon or newegg.com. But you’ll be doing a “PC build.” If soldering irons, heat sinks and EPROMs are alien concepts to you, we advise you to consider either option 2 or 3.

Best WiFi Adapters According to GamingScan

Look at GamingScan’s Best Wireless Adapters for 2019 in the video below:

Wireless adapters can also be categorized by their antennas. Some are omnidirectional (equal Tx and Rx in all directions); others are directional. An antenna’s strength is manifested in decibels over isotropic (dBi). Directional WiFi adapter antennas, like HD TV antennas, are more powerful than omnidirectional ones.

Since 5 GHz signals don’t travel as far in strength as 2.4 GHz, often a WiFi adapter will need an external antenna to communicate with a router/gateway. If you’re using a USB WiFi adapter for 5 GHz, to take full advantage of 802.11ac data speeds you need to be close to the router/gateway to receive a strong signal for a reliable connection and to prevent data packet loss.

When using a USB WiFi adapter from a desktop PC’s rear port, the presence of electrical interference may necessitate the use of a USB extension cable. Use a high-quality cable, preferably as short as possible, to prevent voltage loss. Otherwise, you may need to invest in an active USB extender to regenerate the USB’s signal.

We would be remiss if we didn’t mention these two very crucial elements when using a USB WiFi adapter. Older laptops have USB 2.0 ports while newer ones use USB 3.0 ports. USB 2.0 has a max speed of 480 Mbps; USB 3.0 is theoretically capable of 5 Gbps. Also, remember 802.11n speeds top out at 56 Mbps.

So, let’s hearken back to the beginning of today’s article. You recently upgraded to a 100 Mbps data package from your ISP and need a USB WiFi adapter. To take full advantage of its greater speeds, you need:

An often overlooked consideration when upgrading USB adapters is the security protocol of the router. Since we at the IAG just know you’re diligent about your wireless network security, we’re sure that you’re using a WiFi Protected Access 2 (WPA2) password with 16 random (mixed-case alphanumeric and special) characters. Whatever security standard you use, ensure your adapter uses the same protocol as your router/gateway.

We’ll rant about Wired Equivalent Privacy (WEP) and legacy WPA another time. For now, we’ll just mention that if you’re not using WPA2 or (even better) WPA3 security standards, you’re putting your WLAN at risk of unauthorized intrusion.

As always, how one uses the Internet determines the desired functionality of one’s network elements. Hardcore gamers, if they deign to use WiFi at all, need extreme throughput and very low latency. For them, USB 3.0, an 802.11ac router and an 802.11ac WiFi adapter are more or less de rigeur.

Those of us who don’t need such high-powered networking heft can get by on an 802.11n router to take advantage of its dual-band capability when combating endemic 2.4 GHz network congestion. Just remember to align 802.11 compatibilities with your WiFi adapter, wireless router/gateway and USB release. 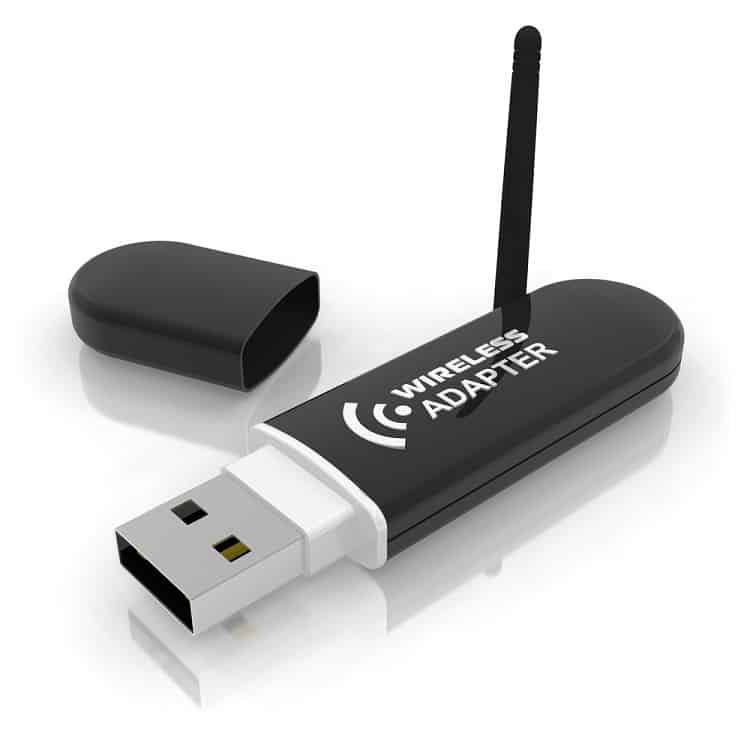