Are 5G Towers “Blight” or “Progress”?

Noticed the onset of the 5G rollout in your neighborhood yet? Telcos and utilities are erecting transmission towers with 5G radio nodes over much of the U.S. and across the world. One might think that the arrival of 5G would be a cause for celebration. In many cases, it’s not.

Residents not only question the safety of 5G millimeter wave aka MMW (a topic we visited during a recent foray at the IAG) but complain about the unseemly “clutter” of this new hardware. Are 5G towers “blight” or “progress”? For the moment, given 5G’s current limitations compared to 4G capabilities, we vote “blight.”

5G Towers or Fiber to the ‘Hood (FTTX)? Do the Math

The, um, tepid reception 5G has so far received from suburbanites is a marked contrast to the welcome given to fiber’s rollout (if your locale was lucky enough to receive it) just a few years ago. Sure, people complained about backhoes digging up their streets. But open trenches and piles of dirt were a temporary inconvenience compared to the wasabi rush of having home Internet with gig data speeds.

But 5G is different; people can’t help but notice indecorous radio nodes on towers in clear view just outside their balconies or backyards. Some are upset that they’re getting unsightly and possibly dangerous 5G radios in their neighborhoods instead of telcos “laying fiber optic cable to deliver ‘superior’ broadband technology.”

But for telcos looking to 1) replace decaying POTS hardwire infrastructure and 2) deliver data speeds approaching that of fiber, 5G deployment is an easy call. Why? It’s magnitudes cheaper than building out residential fiber networks.

Fiber’s Achilles Heel has always been traveling the “last mile” to customer termination. The prohibitive costs of bringing fiber to the doorstep have all but stopped ISPs from continuing fiber buildouts in suburban neighborhoods. Verizon, AT&T and Alphabet (Google’s parent company) have abandoned long-planned fiber networks in cities across the U.S.

For years, telcos, ISPs and multiple services operators (MSOs; think Comcast and within the past few years, AT&T has transitioned to an MSO) have tried to settle on a cost-effective strategy to bridge the final hop from the backbone to the customer interface. They could have chosen WiMax, fixed LTE or new-and-improved broadband over powerline (BPL aka AT&T’s Project Airgig) technology. Instead, it appears to be 5G.

In Harlingen, TX, 5G radio nodes have been installed atop wooden telephone poles. The same happened in San Diego, CA, except they’re harder to spot. Ordinances require concealment of hardware and antenna colors must match the poles on which they’re mounted. In Carmel, IN, 5G small cell towers are “popping up all over the city including by schools, bus stops, homes and businesses.”

Homeowners pother over 5G node installation in their neighborhoods. “It is an actual cell antenna which is emitting radiofrequency radiation,” Carmel housewife Gail Thomas fretted. “They’re actually inching closer and closer to houses.”

While San Diego has enacted among the strictest ordinances in the nation regulating 5G radio node installation, another California municipality has gone even further. The city of Mill Valley passed an “urgency ordinance” in September 2018 forbidding 5G towers in residential neighborhoods.

Of course, none of these “Not in My Backyard” (NIMBY) efforts to block the construction of utility infrastructure are new. In many cities during the late 19th-century, one could look up at a utility pole and see dozens of telephone lines connecting subscribers, each served by a dedicated wire.

According to Joseph Goulden in Monopoly, his interrogatory of the Bell System, as early as 1885 “there was considerable clatter in the press and legislative bodies about putting telephone cables underground to remove their ugly presence from the urban landscapes.”

Indeed, in La Jolla (a part of San Diego), residents rejoiced this summer when telephone poles were removed from their neighborhoods, believing that the long-promised underground installation of utility cables was finally at hand. Instead, workers soon returned to install 5G antenna towers six feet taller than previous poles.

“Workers told me that each (telecom) company is going to install their own,” one resident said. “This is what I call blight.”

This just in! “Plan for 5G Cellphone Towers Cause Concern in Moraga!” Film at 11! Or you can watch it now:

No, the paraphrased statement above isn’t from former U.S. President Ronald Reagan imploring FCC Chair Ajit Pai from building out 5G radio nodes at Simi Valley. Instead, this plea comes from suburbanites all across America distressed at the sight of 5G towers popping up like mushrooms after rain showers in their neighborhoods.

But there’s little they can do to impede the Feds from rolling out 5G in their residential subdivisions, homeowner association covenants be damned. The Communications Act of 1934, as amended by the Telecom Act of 1996, gives the FCC carte blanche to prohibit states or cities from regulating wireless communications towers as long as the infrastructure conforms to FCC guidelines.

Health impacts? Environmental consequences? Blight? Too bad. The Feds have spoken; technological progress will not be hindered.

Think FCC Chair Ajit Pai might be sympathetic to those concerned about 5G health or environmental issues? Think again. “Facilitating the deployment of small cells necessary to support 5G networks is a priority for… Pai, who continues to push for the reduction of regulatory requirements for small wireless facilities.”

The magnitude of the 5G infrastructure buildout depends on who’s doing the talking. For example, former FCC Chair Tom Wheeler, who served under U.S. President Obama, said in 2016: “It’s likely that millions (emphasis added) of new cell towers will spring up to handle the traffic.”

One may ask: what is the CTIA? It’s the 501(c)(6) trade association for U.S. MNOs and their suppliers and wireless gear manufacturers and vendors. One can judge the CTIA’s credibility from their “Wireless Health Facts” website, which claims “typical exposure to 5G devices—such as small cells attached to phone poles or the sides of buildings—is far below the permissible levels and comparable to Bluetooth devices and baby monitors.”

Prepare to hear the word “densification” with 5G over the next few years. In practical terms, densification means lots and lots of 5G small cell towers. 5G proponents tend to downplay the number of towers needed to effectively deploy MMW technology, claiming that tower installation need only occur “a block or so” along streets. This is a highly pollyannaish expectation of MMW capabilities or else evidence of small city blocks.

These observations are a far cry from proponents’ claims of MMW 500 meter coverage.

While many 5G MMW proponents brush away coverage range and connectivity concerns by citing 5G’s “adaptive beam switching” capability, the fact remains that initial 5G rollout in the U.S. focuses on the use of MMW spectrum. 5G MMW not only necessitates more radios (and towers) than the “Goldilocks” spectrum currently allocated to 4G, it’s subject to signal attenuation from atmospheric conditions such as rain, fog and snow.

Even worse, MMWs won’t penetrate materials thicker than clothing. How many Americans who can see 5G towers from their kitchen windows realize that even if after paying a king’s ransom for a phone with 5G capability, they can’t use it unless they walk outside their house? Many already are duped into believing they have “5G” because of AT&T’s devious rebranding of LTE as “5G E.” 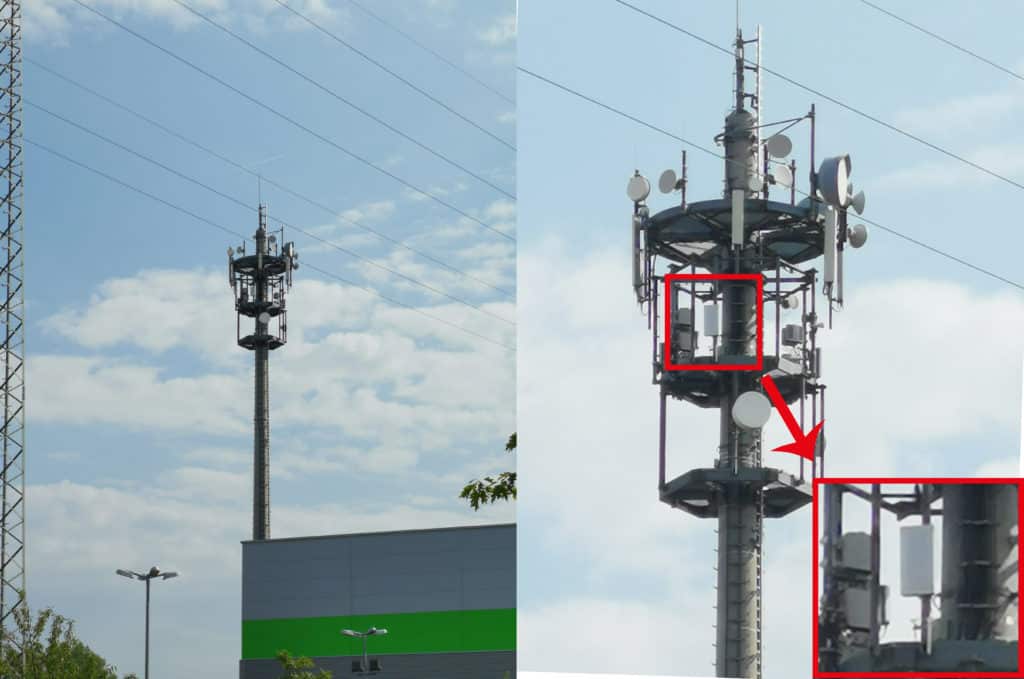