The WiFi Dongle and How It Works

In our last episode at the IAG, we briefly mentioned WiFi dongles, small plug and play WiFi adapters that fit into a laptop or a PC’s USB port for WiFi connectivity. In today’s installment, we look deeper into what a WiFi dongle is and how it works. To take advantage of faster data speeds without replacing your otherwise functional laptop or PC, a WiFi dongle is likely your most economical and convenient option available.

Don’t Get Donged by the Wrong Dongle

WiFi transmits over higher frequencies than those used for mobile (and licensed) broadband, which typically range from 700 MHz to 2100 MHz (2.1 GHz). Particularly in Europe, business travelers hopscotching across the continent use mobile dongles available from multinational carriers like Vodafone or Deutsche Telekom. Data plan subscriptions vary from days to weeks to months or even pay-as-you-go, similar to a mobile SIM plan.

Mobile dongles address users’ needs for security and convenience. While functional pretty much anywhere an LTE or 3G signal is available, they may require stronger modulation than a smartphone. Mobile dongle users don’t need to hunt up a WiFi hotspot and they don’t fret about securing their data. You won’t either, if you’re using a VPN over WiFi whilst online and savoring a mochaccino at a coffee house.

A mobile dongle and a WiFi dongle may appear similar to a casual glance. They both plug into USB ports, they’re pocket-sized and they’re portable. But as two things that are different aren’t the same, so aren’t mobile dongles and WiFi dongles.

Also note: to further complicate usage, wireless channels in use depend on a specific country or region. (See “2.4 GHz and 5 GHz Bandwidths” below.) Thus, WiFi dongles that work in North America may not work in Europe or anywhere else in the world. If this is an issue, MAKE SURE your WiFi dongle automatically searches for approved channels in your particular region when hunting an available WLAN.

If you’re new to tech jargon, you may grapple with terms describing products that sound similar but refer to different functionalities. Such is the case with WiFi and MiFi.

Road warrior business execs deploy MiFi as a portable WLAN when working away from the home office. By using a MiFi dongle or stand-alone router instead of tethering or transforming their mobile phone into a hotspot (viz, mobile phone as a router ), they typically receive better Internet connectivity for their multiple devices without draining a phone’s battery or data plan’s allowance.

For laptops or desktop PCs without built-in Bluetooth capability, BT dongles are available. They operate on the same frequency as IEEE.802.11b/g/n/ax—2.4 GHz. (802.11n/ax broadcasts over both 2.4 GHz and 5 GHz). This is one reason why many prefer to use 802.11ac: to avoid signal interference and network congestion endemic to 2.4 GHz.

You can surf the web over a BT connection by, for example, pairing a laptop to a desktop with BT capability. The latest Bluetooth release—BT 5.0—transfers data speeds at 2 Mbps. So, while using BT for web access is an option, you’ll no doubt prefer WiFi.

Now, back to our regularly scheduled article—the WiFi dongle.

Should you suspect the recipient of a WiFi dongle with external antennas will regard it as cybernetic creepy-crawly emerging from the computer’s bowels, consider a WiFi PCIe card adapter instead.

Proof that necessity is the mother of invention is found in the image below. It’s a safe bet your wife wouldn’t want this homemade WiFi adapter on her laptop.

External antennas such as the “cantenna” above can be pointed (an example of a directional antenna, which performs better than an omnidirectional antenna) at the hosting router for higher gains and better signal reception. To further reduce signal interference, portable antennas can be placed at a distance from the internal electronics of a computer.

Dongles with internal antennas—such as the HSDPA adapter attached to a laptop in the image below—don’t perform as well. But we bet your significant other will prefer a WiFi adapter as discrete and subdued as this 3G modem instead of the “cantenna.”

“Me Oh MIMO” and Beamforming

To take advantage of the fastest data speeds, your WiFi dongle will need Multiple-Input Multiple-Output (MIMO) capability. If you’re using an 802.11n WiFi adapter, you’re limited to legacy single user (SU) MIMO technology. Those who avail themselves of 802.11ac can use multiple users (MU) MIMO.

Also, thanks to beamforming, radio transmissions between a host (router) and a client device (viz, laptop) are customized per their physical locations. A specific user receives only the required signal. Hence, transmissions are more efficient and consistent. By concentrating radio signals toward client devices, beamforming achieves a greater signal to noise ratio (SNR) and a more robust connection, which achieves greater throughput.

But (in North America) 5 GHz avails users a width of 645 MHz, allowing 8 data channels of 80 MHz widths, or 16 channels of 40 MHz width (if the router has Dynamic Frequency Selection [DFS]). This bigger pipe helps 5 GHz users to receive greater data speeds than those using 2.4 GHz.

All network devices must be 802.11ac compatible to take advantage of 5 GHz speeds. This includes a WiFi adapter dongle as well.

Previously, we noted the large discrepancy between Universal Serial Bus (USB) 3.0 (max 5 Gbps) and USB 2.0 (max 480 Mbps) data speeds. But don’t expect anywhere close to these speeds. It’s unlikely that you have even 1 Gig speeds from your ISP, and unless your USB 2.0 drive is top-shelf platinum, you won’t sniff 480 Mbps either.

USB capability is the most likely bottleneck you’ll encounter when trying to upgrade to faster data speeds. Replacing an 802.11n router with an 802.11ac router is no big deal; replacing a laptop’s built-in wireless capability with an 802.11ac WiFi dongle is also simple. But if your device is saddled with a USB 2.0 port, your data speeds will be capped at a maximum of 480 Mbps.

A quick way to see if your laptop has a USB 3.0 is to check the inside the port. If you see blue, you almost certainly have a 3.0 port. And, in case you’re wondering, USB 3.0 is backward-compatible with 2.0.

Since we’re sure that you, dear reader, diligently read the IAG, you know that 5.0 GHz frequency can’t push its full data capacity nearly as far as 2.4 GHz. It also doesn’t penetrate walls, floors and obstacles nearly as well as 2.4 GHz. On the other hand, the 2.4 GHz spectrum is virtually exhausted from all the devices operate over it.

Take the above with a grain of salt; Mr. Kelly omitted the material of the “two walls.” But if you’re in the line of sight of your 802.11ac router, upgrading your speed to 5 GHz with a USB 3.0 wireless dongle is likely worth the expense. 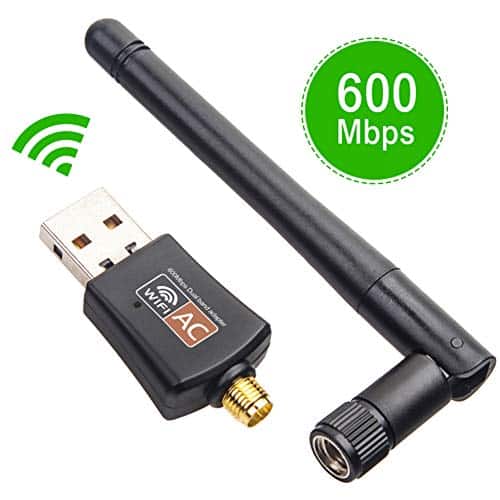