Gaming is everywhere nowadays. Either on consoles connected to ultra-enhanced video Smart TVs, the PC Master Race and their top-notch video cards, or even smartphones that bring gaming to the palm of our hands.

For PC gamers, the challenge has always been dealing with handling the keyboard and mouse at the same time, especially when games get to those more demanding parts.

For console addicts, it became a matter of choosing the right controller, since it seems like some manufacturers still haven’t reached the final form of their joysticks. And even mobiles have been finely tuned to connect to wireless controllers and deliver a more intense gaming experience.

No matter which platform you choose to game on, the controller will be a key aspect. And like it or not, there is not much you can do – at least for most platforms.

PC gamers have found ways of connecting wireless controllers to their systems and are enjoying their favourite games with their perfect controller in their hands. As easy as it comes, gamers can find controllers from any console adapted to PC use.

As for the world of the consoles, some manufacturers put a lot of time and money into designing the final controller that would bring all gamers together. While they get more and more expensive every time a new generation controller is released, most of them are worth every single penny.

If, on one side, Microsoft’s Xbox Wireless figures amongst the most renowned controllers with its radio-frequency wireless connectivity, Nintendo Switch’s is definitely not giving up the race.

Their exclusive line-up of controllers contends with PowerA Enhanced Wireless and the manufacturer’s own Pro Controller. So far, neither of the latter have reached the top of the podium as gamers fiercely debate online which is the best.

New Nintendo Switch gamers can always experiment and draw their own conclusions, but most of the older players deem it vital to have a favourite controller.

Therefore, we came up with a pros and cons of both the PowerA enhanced wireless and the Nintendo Switch Pro Controllers, so you can decide which one suits you better. Bear with us and find out which controller suits your gaming style better.

Back in 2018, when Nintendo Switch only had one type of controller, PowerA came to change the rules of the game with its alternative Enhanced Wireless gadget.

From scratch, the first noticeable comparison between the two is the price, which puts PowerA way ahead of the game with its much more affordable controller.

Apart from that, the company designed a controller that comes with two fully programmable buttons, which, of course, delighted Nintendo Switch players everywhere. That means these two buttons could be a substitute for keeping the thumbs on the thumb-sticks for prolonged periods time.

For accuracy as well, the programmable buttons seemed to work perfectly, which grabbed the attention of even the veteran players who seemed to have found the perfect controller with the console’s original provision.

Regarding the power system, PowerA enhanced wireless controller differs from the original for not carrying an internal rechargeable battery, but instead running on two AA batteries.

This novelty was not to the taste of most Nintendo Switch gamers, who reported the swapping of batteries to be frustrating as it staggers the gaming experience.

The manufacturer informed the community that the controller would work for around 28 hours with fresh AA batteries, which is commendable, but still requires players to swap them every now and then.

Some players challenged the quality of the controller for its light weight, which in many cases represent a weaker build, to which the manufacturers responded that, with a lighter controller players can hold on to it for longer before they get tired.

The promised longer game time experience seemed to cause a positive effect and led the weak-build allegations to waste. Another battle won by PowerA’s enhanced wireless controller is the input lag test, which even surprised the most experienced gamers.

As for the rumble function, unfortunately PowerA did not manage to come with a solution and it does not feature in their controller, which scores a point for the original Pro Controller. We like the rumble! As for that matter, the NFC is also not present in PowerA controller whereas it is offered by the original.

So, for the bigger picture, PowerA enhanced wireless beats the original Pro controller in many aspects. Firstly, the affordability, as the first may be found for around fifty dollars. Secondly, the programmable buttons, which brought gaming on Switch to a whole new level and can be re-programmed at any time.

Also, the availability of the D-pad and the analogue sticks are apparently better than in the original controller, as reported by many users. On the other hand, the constant battery changing seems like a deal-breaker for many players, who might not even give PowerA’s controller a chance because of it.

Another point, though it does not really count as for the quality of the controller, is the aesthetics. In this category, PowerA offers over twenty-seven different colours and styles, satisfying whatever tastes gamers may have – for good or for bad!

It would be unfair to say at this point whether the PowerA enhanced wireless controller beats the original Pro gadget, especially since we still haven’t pointed out the pros and cons of the latter. Since the point of this article is to compare both devices, let’s check what Nintendo designed as an official controller for Switch.

What About Switch Pro Wireless Controller? 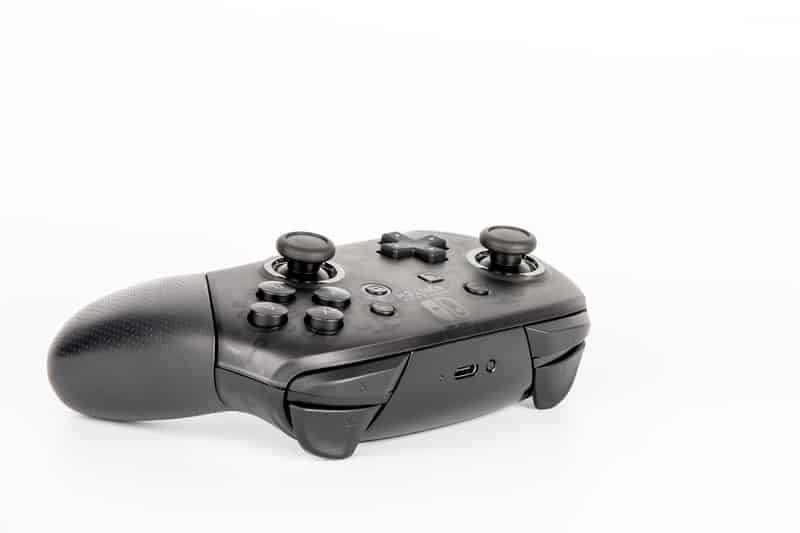 Considered to be in the same level as PS4 DualShock and Xbox wireless controllers, Nintendo’s Switch Pro Controller took the market by storm upon its release.

Although it looks a bit curvier, the resemblance to the Xbox 360 controller is uncanny. Besides that, Switch Pro Controller is a light and well-balanced option for gamers with its beefier buttons that give a better touch sensitivity aspect.

As for the body, it feels a bit chunkier than Xbox and PS4 controllers, which explains its extra long battery life. The manufacturers promise up to forty uninterrupted hours of gaming before the controller has to be charged. Apart from that it feels comfortable, and the face buttons offer the perfect amount of depth.

Similarly to the Joy-Cons, the Switch Pro Controller supports features like HD rumble and motion control, but in comparison the latter is way ahead of the competition.

Depending on the genre of the game, the experience can be even more frustrating for Joy-Cons, which are definitely not the best option for fighting games. In this regard, the Pro Controller is side by side with Sony and Microsoft controllers.

The rechargeable battery scores well when it comes to keeping the gaming going on, putting the Pro Controller ahead of the PowerA Enhanced.

As for the infrared camera, present on Joy-Cons, the manufacturers of Pro Controller decided it was not such a relevant feature for a controller that is not designed for motion gaming and left it out. Regarding connectivity, the Pro Controller can also be paired via Bluetooth with PCs.

To summarise all that was said above, if you are not looking for a cheaper option, the Nintendo Switch Pro Controller should be the best option for you.

On the other hand, if you are looking for an affordable option, the PowerA enhanced wireless should cut at least twenty dollars of the price of a Pro Controller. Besides that, the unofficial controller has remarkable features, as the programmable buttons, which makes it a solid option for gaming.

Although most gamers made it clear that the Pro is a better controller than the Enhanced, in the end it’s a matter of how much you want to spend, since both should deliver a great gaming experience. 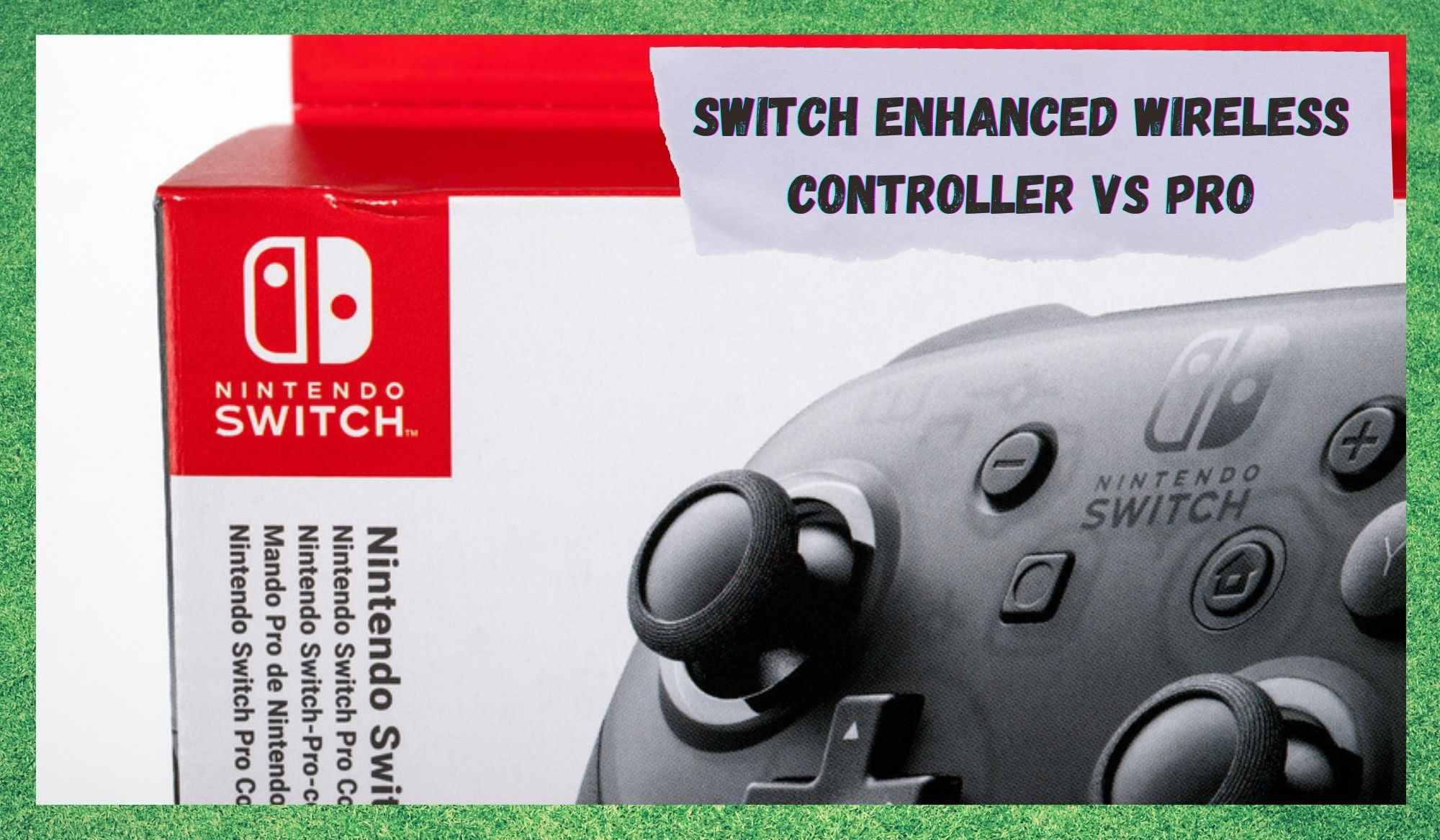