If you’re a devoted IAG reader, likely you already know the difference between a hotspot vs. WiFi. But if you think they’re two different words describing the same thing, well, we’re here to provide enlightenment. As Immanuel Kant said when describing metaphysics, “Things that are not the same are different.”

Thus, we need not worry if Gottfried Wilhelm Leibniz‘s principle of the indiscernibility of identicals applies to hotspot vs. WiFi—assuredly, it does not. As a service to our reflective readers, the IAG employs an ontological approach to help explain the difference between these two a posteriori networking terms.

Medium vs Messenger; Hotspot vs. WiFi

It’s an epistemic truth that hotspots wouldn’t exist without WiFi. Borrowing a contorted paraphrasis from Marshall McLuhan‘s media theory, WiFi is the “messenger” while a hotspot is the “medium.” However, in our comparison of the two, we reject his corollary that “the medium is the messenger” and instead reaffirm Kant’s claim that “things that are not the same are different.”

To illustrate, consider McLuhan’s philosophic distinction between “form” and “content.” WiFi consists of two different bands of radio frequency spectra (2.4 GHz and 5 GHz) delivering Internet content. A hotspot is an entity, or “form,” from whence WiFi connects to wireless-enabled devices.

Yet, we embrace McLuhan’s insight between medium and messenger. He drew an analogy between a light bulb to the impact electricity in the home has made on our lifestyles. A light bulb doesn’t offer content like a newspaper or a TV does, yet home lighting powered by electricity has changed our social habits by enabling people to stay up late at night rather than go to bed when the sun sets.

The same can be said for a hotspot. How many of us have stayed up all night surfing the web, sprawled on our couch, using WiFi from a WiFi router? By the way, hotspots and routers too are different, but that’s a discussion for another day.

While McLuhan did not live to see the onset of the Internet, he surely anticipated its arrival. In Understanding Media: The Extensions of Man (1964), he wrote: “For the ‘content’ of a medium is like the juicy piece of meat carried by the burglar to distract the watchdog of the mind.” Facebook, anyone?

Should you have “unlimited” data on your mobile device, maybe you’ve pondered replacing home WiFi with cellular LTE connectivity. Unless your smartphone is the only computing device you have at home, don’t do it—and we don’t need to wax philosophic about our averment.

Why? You’ll need to keep your device plugged into an electrical receptacle since you’ll otherwise rapidly deplete your phone’s battery—and keeping your phone hooked to a power outlet doesn’t sound very “wireless” to us.

Too, a hotspot only supports two or three devices; your router can support dozens simultaneously. And your “unlimited” data is likely throttled after you exceed your plan’s data cap, reducing the utility of your hotspot. Have you considered what to do when the need arises to download large data files?

If you, gentle reader, are like your faithful blogger, you keep multiple tabs open when you surf the Net. Know keeping multiple browsers open rapidly drains data from your plan. Data usage on a cellular hotspot is a paramount concern; below, we discuss why.

Most people never think about how much data they burn on their home Internet. If your ISP imposes a data cap on your home Internet usage, it’s bountiful by comparison to the scrimy data limit an MNO puts on your account.

Even the most generous data plans by mobile carriers throttle data down to 2G speeds or slower after users exceed data allowances. Non-satellite MSOs commonly provide 10 or 20 times more data—if they cap data usage at all.

For example, as of September 2019, Verizon‘s “Get More Unlimited” mobile hotspot plan offered 30 GB of 4G speeds before throttling data—for $90/month. Your cable company delivers a lot more data per month for that kind of moolah, and at comparable or faster data speeds.

The IAG has long lauded the virtues of WiFi instead of cellular service to significantly trim mobile roaming charges. We’re not about to advocate replacing your home’s WiFi with a cellular hotspot.

We would be remiss if we didn’t mention security concerns concerning public hotspots vs. home WiFi. It’s easy to secure connections in both environments but each has its separate protocol.

With home WiFi, merely use WPA2-PSK. It encrypts data using a “plain-language” passcode consisting of 8 to 63 characters. We recommend a mix of upper- and lower-case letters, numbers and special characters of at least 16 in length. If possible, upgrade to the latest security protocol, WPA3—but eschew WEP, which is easily cracked.

When in a public hotspot environment, ALWAYS use a virtual private network (VPN). Free ones are available from Proton and TunnelBear. Particularly, when visiting bank or email websites requiring a password submission, ensure that you’re protecting the integrity of your data with a VPN.

For our readers who favor a more pedantic view of these two networking terms, we provide the table below:

We give the final word on the differences between hotspot vs. WiFi to Aristotle and his principle of non-contradiction. He stated in his classic Metaphysics, “It is impossible that the same quality should both belong and not belong to the same thing… This is the most certain of all principles.”

Thus, a hotspot and WiFi cannot be one and the same. This ontological approach necessarily leads to the discipline known as Foundationalism or, as we like to say, “a glimpse of the blinding obvious.” 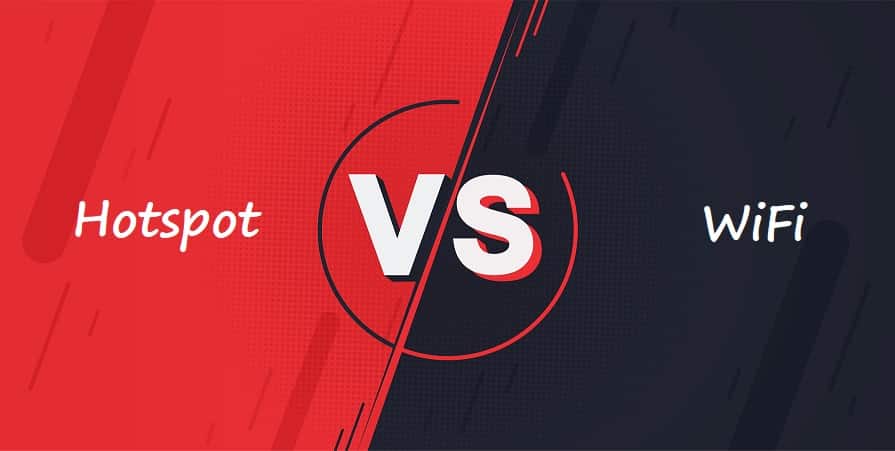