For those of you who may not be all that familiar with the Insignia brand, they are essentially the ‘value’ company that most will turn to their smart TV needs. However, don’t let the fact that they are a budget brand tarnish your image of them.

The only thing that is budget about these TV’s is the price tag. Asides from that, there isn’t actually all that much in the difference between them and a standard issue Samsung. So, you have essentially managed to get your hands on a feature laden piece of engineering for a fraction of the cost.

Because of this, and no doubt as a result of the fact that Insignia is Best Buy’s signature brand, these TVs have become massively popular in recent times.

And, because it is made by a massive company with a solid reputation, you generally have very little to worry about when it comes to quality. However, this doesn’t mean that absolutely everything is going to work perfectly forever.

Every now and then, it is inevitable that some component or other will let the team down, causing your TV to ‘break’. However, in the case of the issue that you are currently stuck with, the blank screen problem, the news may not be all that bad.

So, rather than just calling the TV broken, let’s run through some simple troubleshooting steps first. It won’t take long, and it will actually give you a decent chance of fixing the TV yourself rather than having to call in the professionals. So, let’s get stuck into it then!

How to Fix the Blank Screen Problem on an Insignia TV

For those of you who have read our articles before, you will know that we like to kick things off by explaining what is causing the problem in the first place. That way, if it happens to you again, you will know exactly what is happening and be able to fix it much quicker.

So, here it goes! For those of you who had guessed that the issue was most likely to do with no power getting to the TV, well done. You are most likely correct. That will indeed cause the screen to become totally unresponsive.

However, it is also reasonably likely that the whole thing could be caused by something as simple as a loose or damaged cable. Additionally, it is also possible that you may be using the wrong source.

That will also give the same result. On the more serious end of the scale, we could also be looking at a shorted out component, possibly the backlit sensors. In any of these eventualities, we’ve got the methods to deal with them below!

1) Try to run a power cycle on your Insignia

Though this step may sound a little too simplistic to ever be effective, it is a great place to start when it comes to problems like these.

In fact, it works so often that IT pros often joke that they would probably be out of a job if people just tried this first before calling for help. In general, restarting any device is excellent for giving it some well needed rest.

Think about it, these things are often on or on standby mode for months at a time. A little rest will do the world of good in a lot of cases. As a bonus, a power cycle is great for getting rid of any bugs that may have accumulated over time.

Running a power cycle is a really easy process, but you don’t actually do it from your remote. To properly get the benefits of a power cycle, you will actually need to unplug the TV entirely so that no power can be brought into the device.

The, all you need to do is let it sit there like that for a couple minutes. Once you’ve done that, you can plug it back in again and check to see if it is working as it should be. If it is, great. If not, it is time to move onto the next step.

2) Check that you are using the right source 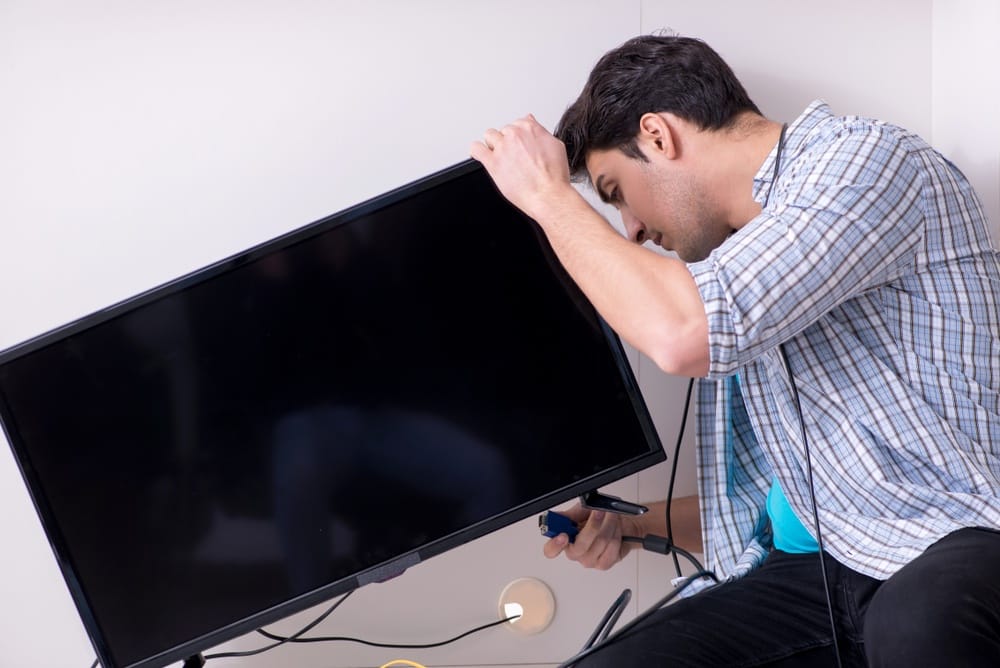 The next step is also a rather simple one. However, it makes a lot of sense to check these things off before we assume that the problem is larger than we had thought.

So, all you will need to do here is make sure that you are using the right output/source. If not, there is a chance that you are needlessly staring at a blank screen while the action goes on elsewhere.

Just to make sure that all bases are covered here, we would also suggest that you try using a different source.

After all, if it is just that input source that you had been using, the problem isn’t all that large and can easily be sidestepped by using another. With a bit of luck, this will have been the cause of the issue for you. If not, it is time to up the ante a little.

3) Check all of your cables 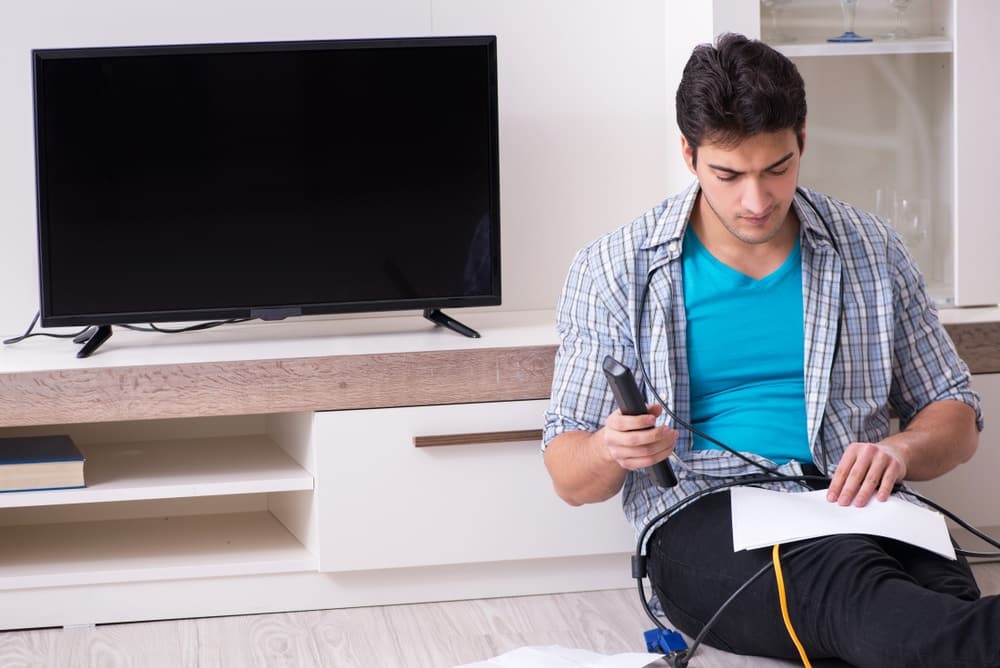 More often than not, if you have made it this far, the problem is most likely to be something to do with your cables. Of course, if any of your cables are in any way loosely connected, they won’t be able to transmit enough of a signal to generate any real effect.

When this happens, a totally blank screen is the normal result. So, to exclude this possibility, we will first need to disconnect all of your cables. Then, all you need to do is connect them as tightly as possible and try again.

If nothing is working yet, we would also suggest that you check all of your cables for signs of damage. What you should be looking for in particular is any signs of fraying along the length of each cable.

If you notice anything that doesn’t look right, the only thing for it is to immediately replace the offending item with a new one. Hopefully, this will have fixed the problem for you.

4) Call in the professionals 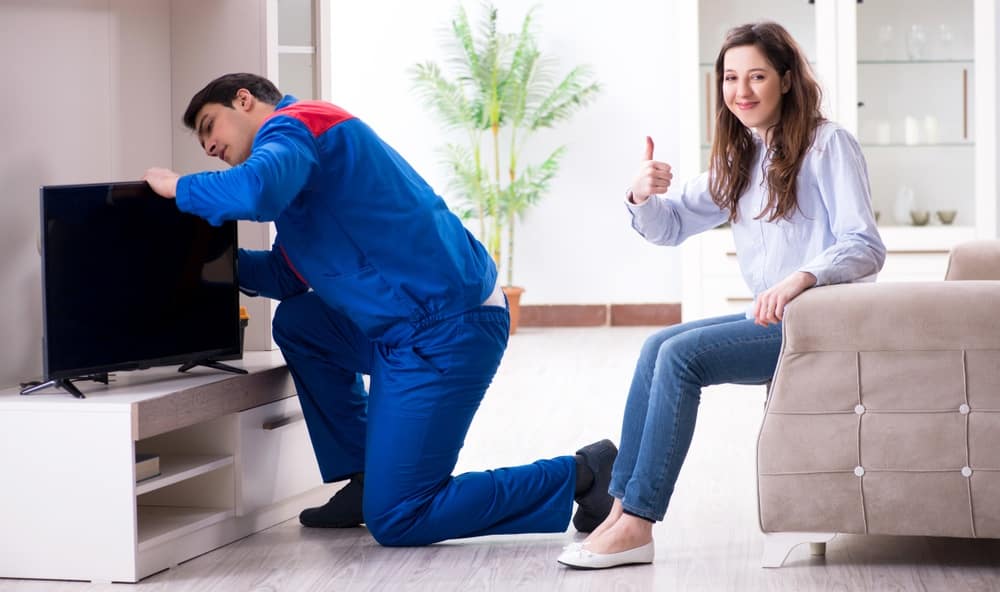 Unfortunately, we cannot recommend that you go and take apart anything unless you possess a decent level of know how when it comes to electronics. So, this means that the only logical course of action from here is to call in the pros.

At this point, it is most likely that the problem is being caused by an advanced issue with the power supply. If not, there may be some sort of issue with the backlit sensors.

In either case, the best course of action will now be to take the TV to a licensed specialist so that they can diagnose and repair the issue without running the risk of doing any additional damage. 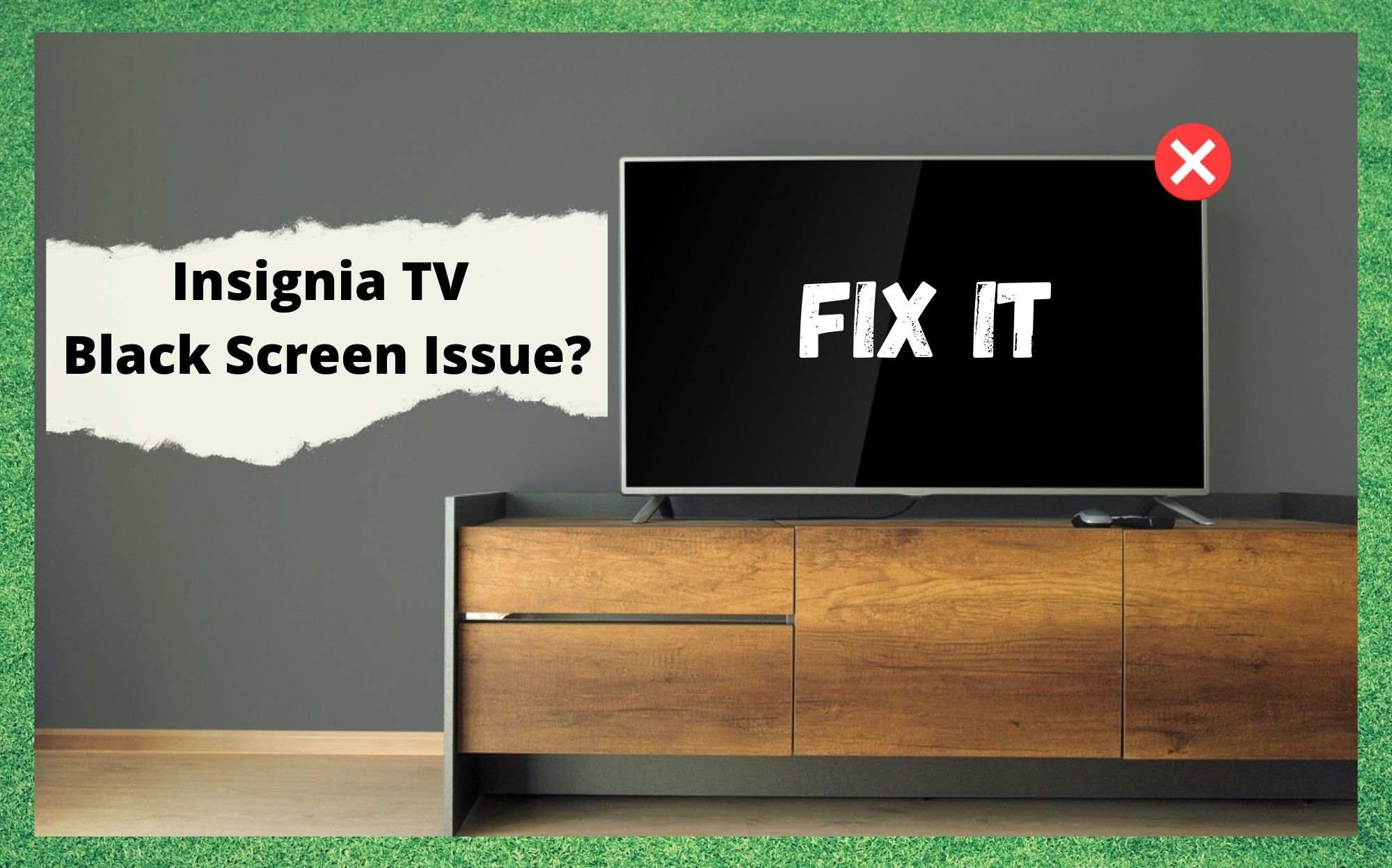