As faithful IAG readers have no doubt noticed, we’ve spent considerable time and space mooting over various aspects of satellite Internet service. Now, it’s “bottom line” time: how much does satellite Internet cost? We’ll crunch the numbers for you below. Spoiler alert—no matter how you break it down, sat Internet service is more expensive than virtually any terrestrial-based network.

Forgive us for sounding like a stylus stuck on a phonograph record but the only reason why anyone would choose a sat ISP like HughesNet or Viasat is because other options are either PSTN dialup (GASP!) or legacy DSL. Both sat ISPs offer faster data speeds, both have virtually a universal footprint across North America and, yes, both are much more expensive than dialup and legacy DSL.

We’ve ticked off other reasons not to use satellite Internet but foremost is the issue of network latency. It wreaks havoc on interactive applications such as MMO and FPS games, video conferencing and VoIP. Moreover, sat Internet doesn’t work well with TCP; try using a VPN with a satellite connection and you’ll see what we mean.

For many out of reach of terrestrial broadband (and we mean 25 Mbps per the FCC’s definition) networks, the expense of satellite Internet is like divorce: one subscribes “because it’s worth it.” But binge-watching a season of your favorite Netflix series streamed in HD and (especially) in UHD over a sat ISP connection costs dearly when later replenishing a depleted monthly data allowance.

Sat ISPs constrain consumers by imposing restrictions on the data their subscribers can use per month. Should users exceed their monthly allowance, their data will be throttled or “deprioritized” (the effect is the same). Some MSOs, like Comcast, once throttled data but now charge overage fees if a subscriber oversteps the boundaries of a data plan.

As we’ve previously shown in previous IAG posts, sat ISPs are incredibly stingy with Internet data; Viasat even offers a miserly 10 GB allowance plan. Just one feature-length movie streamed in UHD will exhaust this monthly allotment of data before the end of the film. HD video depletes a 10 GB cap in just over three hours.

So, based on GB cost, let’s compare a HughesNet package to one offered by Comcast. Bear in mind that HughesNet charges subscribers for data allowance while Comcast—like most land-based ISPs—offers plans based on data speeds.

Do the math; HughesNet charges $3 per GB while Comcast (for this specific plan) bills $0.60 per GB.

For a more accurate representation of total costs, installation and equipment costs should be factored into the two packages. According to the fine print, Comcast charges up to $500 standard installation (but more likely either $60 or $90) while HughesNet has free installation.

As for CPE, such as their ODU and modems/routers/gateways, HughesNet charges either $9.99 per month or allows the subscriber the option of buying CPE outright for $349.98. With Comcast there’s no ODU, of course, and one can choose between leasing a gateway or buying one compatible with Comcast’s DOCSIS network. Leasing a gateway from Comcast costs $11 per month.

Since subscribers are required to commit to HughesNet for 24 months or else face a steep early termination fee (ETF), let’s compare two years of monthly billing between HughesNet’s GB 50 and Comcast’s Blast! Pro packages.

No matter how one spins it, sat ISP costs twice as much as a terrestrial-based Internet network. And this difference holds more or less true across the gamut of available service plans.

Since we’re piling on HughesNet, take a gander at this user-submitted YouTube video: https://www.youtube.com/watch?v=xuom660hCpc

In our glance at publicly-traded Viasat, we listed concerns market analysts found with the company. Over the long haul, the outlook for the overall sat ISP market is no better. Consider:

AT&T is developing a low-cost technology called AirGig®, which uses electrical power lines to transmit broadband Internet. Yes, observant readers will remember that we dismissed Broadband over Power Lines (BPL) technology as too slow and plagued by radio spectrum congestion. Apparently Ma Bell has improved BPL; we’ll find out when AT&T rolls out AirGig in early 2021.

Why could this be the death knell for sat ISPs, at least in North America? Virtually anyone within five miles of a power grid can tap into this nascent technology. It sends and receives data over the “last mile” from a wireless transmitter installed on a utility pole to a subscriber’s wireless home receiver.

AT&T claims that AirGig data speeds will approach 1 Gig (1,000 Mbps). If AirGig trials in Georgia delivered “speeds nearly 600% faster than the baseline speeds satellite Internet providers can offer,” who then would want a satellite ISP with its inherent latency and piteously shallow data allowances?

Astranis claims that its first production satellite weighs ~350 kgs (~770 lbs) and “will triple the satellite Internet capacity of Alaska,” noting that 39% of Alaskans don’t have reliable Internet access.

That means Astranis is spending untold millions of dollars to reach a potential—mind you, a potential—market of fewer than 288,000 people. Their ballyhooed “software-defined radios” (SDRs) in space are out to eventually bring sat Internet to an unserved world population of 4 billion.

If AirGig is as good as advertised—not to mention LEO satellite technology like Elon Musk’s Starlink and OneWeb and Google X (a worldwide network of balloons on the edge of space)—prospects for GEO sat ISPs are bleak, no matter what the cost or provider. InMyArea.com “estimates that the satellite internet industry could lose over 30% of its market share by 2026.” 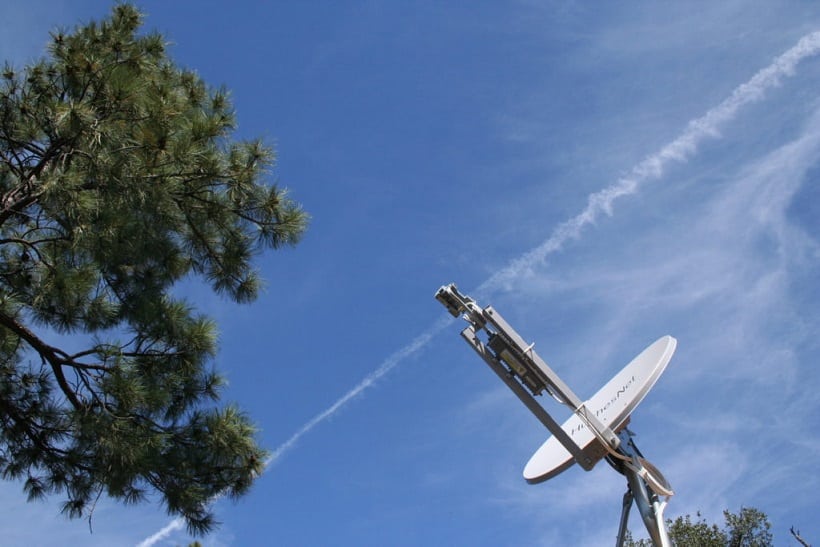