Mesh networks and the wireless repeater systems have always been active combaters against the clumsy and far-fetched Wi-Fi networks. Wireless repeaters are best known for their ability to take an existing wireless signal and repeatedly broadcast it, whereas the mesh networks detect all the existing devices on a network directly connected to every other device with no use of a central router or main hub/switch. Now AIMESH!!! Asus routers have featured this new technology option inspired by the mesh network.

By now we must have a fair idea about the nature of both of these technologies; AiMesh and Repeater. If we look closely, we would realize that these featured technologies’ mutual purpose is to extend the network coverage and strengthen the network signal within the given network area. Now is the time we pinpoint the main comparison between the features of these wireless technologies.

Remember that Aimesh routers are inspired by the mesh network. They are created and designed by Asus broadband while wireless repeaters are separate devices that are created by random tech companies so you must pick a better one.

Looking up the importance and market feedback on the advantages of mesh Wi-Fi networks, broadband of ASUS routers developed AiMesh—brand new technology. These mesh network built-in routers have the best features of traditional high-end routers along with the mesh Wi-Fi systems.

This uniquely improved technology has set a new standard bar for mesh Wi-Fi systems while giving consumers a convenient way to mix different Wi-Fi routers for giving a proper shape to a mesh network.

Now that you have many in-depth visions of both of these technologies, their function and their working, and their purposes; we would dive you straight into the points of comparison between them. Although, remember that you are free to use them according to your needs. You will have much wider insights once you look up the pinpointed comparing points. Let’s go!

Comparison Between AiMesh vs Repeater:

AiMesh vs Repeater, both are created for one purpose while having distant functions. To understand better, here is the point by point comparison.

Both function in drastically distant ways while having a mutual purpose. Refer to these.

Created out of inspiration from mesh network systems, AiMesh is the best solution which optimizes the use of mesh network. Instead of spreading up from point to point, AiMesh routers have the traditional features of mesh networks along with the other high-paced internet solutions within a single device. It is a fully-fledged router. It generates signals and transmitting on its own.

Both have different strengths when it comes to stability and reliance.

Here Repeater is one step behind as they have no part to play in increasing network resilience. How? If the access point has failed to generate a decent signal, then no repeater would be able to repeat it and retransmit it.

Asus AiMesh routers have a victory in terms of stability. How? As an inspired and modified form of mesh systems, these routers have a stable network device—a router itself. If your ISP is not problematic, then there is no way your router would lose the stability.

In terms of flexibility, AiMesh is again a clear winner as they can be used wherever you want them to be used. Need high-speed internet? Pick AiMesh. Need extra coverage for your network? Pick it. On the contrary, Repeaters are far off from such flexibility.

You must be able to choose one between Repeater vs AiMesh for your home network as you have plenty of arguments resolved. Although, we would advise you to choose AiMesh router if you are looking for a long-run solution. 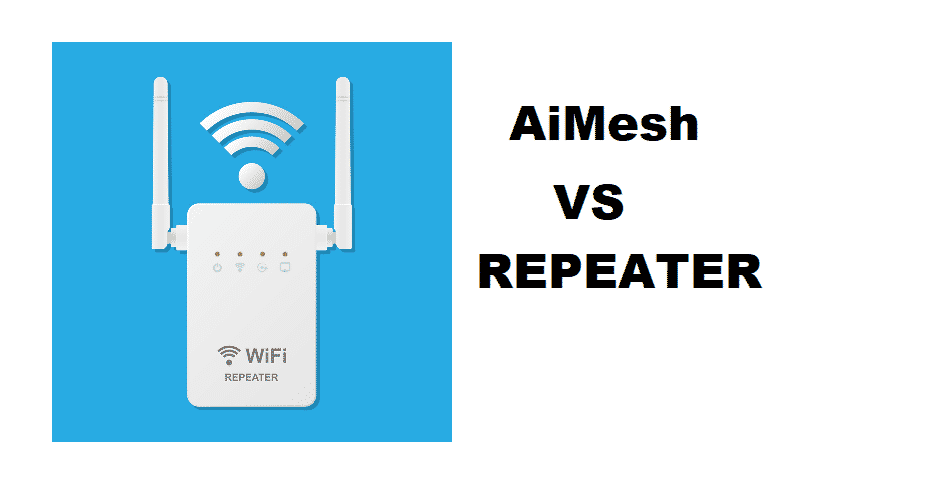