Streaming Comcast’s Xfinity on the Internet is usually a hassle-free experience. However, some users have reported issues with the Xfinity stream without flash lately. Over time, flash has kind of become irrelevant and many of the top players in the industry have given up on Adobe Flash.

Although Xfinity was late in realizing the trend, they were finally compelled to switch to HTML5 after the two major browsers, Chrome and Safari both announced that they will not be supporting Flash on Computer by the end of 2020.

Xfinity started rolling out a flash-less experience for its users earlier this year and many users reported being able to enjoy the Xfinity stream without enabling flash on their browsers. Even though most of the users no longer require flash to enjoy the Xfinity stream, some users might still be required to use flash. This is simply because instead of making the update suddenly for all its customers, Xfinity is slowly rolling out the update.

According to the details given on Xfinity’s website, Xfinity’s ON Campus web player was supposed to transition from Flash to HMTL5 in early 2018. Reportedly there have been a few delays in the process. However, for most of the users, the transition has been completed and they can easily enjoy Xfinity Stream without Flash using HTML5.

So whether you are using Chrome, Firefox, or Safari, you will no longer be faced with the annoying error message telling you to install Adobe Flash Player. One of the major confusions that have been faced by many Xfinity customers is that other browser and setup issues have led them to believe that maybe they are not able to access Xfinity stream due to lack of Flash player on their device.

An important thing to remember while trying to enjoy Xfinity Stream without Flash is that you must have the latest version of your browser to have a hassle-free experience. So whether you have Google Chrome, Firefox, Safari, or Microsoft Edge make sure that you have the latest version of the browser. If you keep getting the error to install or update your flash player despite meeting the minimum operating system requirements, then probably it is best to contact the Xfinity customer support. They will be able to explain the reason behind the error. 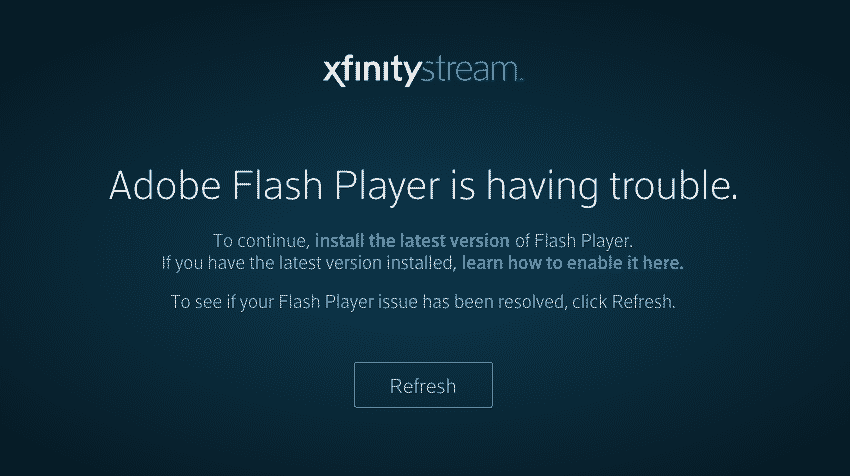