A centrally-located “volcano” WiFi router once served the needs of a home’s WLAN, providing adequate connectivity for a laptop and/or desktop PC. Now, with UHD TVs, game consoles and mobile devices, people need consistent broadband speeds all across their dwellings. The IAG looks at two popular WiFi mesh network systems to help you decide if Google WiFi or Netgear Orbi is right for your needs.

Longtime IAG readers recollect that we urged them to own their DOCSIS gateway instead of renting one from “the cable company.” If you haven’t, purchasing a WiFi “meshnet” system will almost certainly deliver a better online Internet experience than an MSO-owned router you pay to use each month. WiFi meshnets are more efficient in performance and cost than conventional WiFi WLANs.

During the heyday of 802.11a/b/g, people made fewer demands on their home WLANs. If their laptop couldn’t connect to WiFi, they simply moved closer to the router.

Enter WiFi mesh network kits. These systems consist of separate nodes/routers placed at strategic points to maximize WiFi coverage across the home. Components come pre-configured and include a host and one or more satellite routers—the number of satellites depends upon the area of coverage needed. This network pre-configuration eases the setup of additional satellites if needed.

Mesh networks use algorithms to determine which node has the best connectivity for each connected device. Each node intercommunicates with its counterparts. This “roaming” allows mobile devices to switch between nodes for best connectivity as users wander through the home.

How do mesh networks differ from extenders? The short answer is that a mesh network is an integrated network (one SSID) while extenders are in effect separate individual networks, each (usually) with its own unique SSID. Extenders also tend to significantly degrade overall wireless throughput, causing slower data speeds. Any time an extender is relocated to a different area in the home, it must rejoin the network.

In brief—if you doubt your tech skills, you’ll prefer a mesh network over a wireless range extender.

Since debuting a few years ago, home WiFi mesh networking has rapidly grown into a mature market sector. For example, Google’s home WiFi meshnet kit accounted for part of (at least) $2 billion in hardware revenue Google raked in during 2019. In September 2019, Kenneth Research forecast that the worldwide wireless mesh network market will reach US$21.75 billion by 2026.

Consumers have plenty of meshnet kits to choose from and it seems every tech pundit has a personal favorite. Too, many kits are marketed to various niches like gamers, “style-conscious homes,” “mesh system newbies,” “homes with kids” or homes with IoT devices.

Meshnet kits can serve as the basis for a Smart home-connected buildout, as users add various accouterments such as voice-controlled thermostats and specialized remote controls for TVs and light dimmers for convenience. For all these tasks to work consistently, a strong and stable WiFi signal is needed wherever an IoT gizmo is located.

What to Look for in a Home WiFi Meshnet Kit

Of course, not all meshnet kits are created equally. Below are product features and capabilities consumers should consider before purchasing a meshnet kit.

When shopping for wireless routers (meshnet kits included), one will see “AC 1200,” “AC 1900,” “AC 3200,” etc. “AC” refers to the IEEE 802.11ac WiFi standard, and the number represents the router’s maximum theoretical (emphasis added) bandwidth over both the 2.4 and 5 GHz frequencies. One could be excused for believing that an AC 3200 router delivers 3.2 Gbps speeds. It does not.

The max speed this router could see would be 1,300 Mbps on either band 2 or band 3, and that would be a Marconi dream—not a real-world Internet experience. So approach these specs with a grounded sense of dubiety.

One more caveat: most routers today are dual-band, broadcasting over 2.4 GHz and 5 GHz. Dual-band routers usually have an “AC” number up to AC2900. Tri-band routers are usually designated AC 3000 or higher (although lower throughput tri-band routers, i.e., AC 2200, are available) and broadcast over one 2.4 GHz frequency and two 5 GHz frequencies. The third band of a tri-band meshnet router is used for backhaul between nodes.

If you need the flexibility to connect peripherals like external hard drives, printers or Bluetooth adaptors, you’ll need a USP port(s). Some meshnet kits have them (Orbi), some don’t (Google WiFI).

These consist of both WAN and LAN ports. Of course, a router needs a WAN port to connect to a modem. Some models just have one of each (like Google WiFi). Orbi provides one WAN port and three LAN ports on the host router with four LAN ports (no WAN port) on satellites. Users who need to hardwire connect devices, take note.

As we noted above, many meshnet vendors market their wares to those eager to embrace IoT and Smart homes. IoT capabilities vary among systems. While some meshnet kits may be Amazon Alexa- or Google Assistant-friendly, others go further. For example, Google WiFi is compatible with the IFTTT task automator app—used for home automation—and Philips Hue lights.

This invaluable feature found on tri-band routers is a band of spectrum reserved exclusively to transport data between the host and its satellite nodes. Meshnet kits with this capability are, of course, much faster than those without. Orbi has it; Google WiFi doesn’t. Also, some meshnet systems can use Ethernet for backhaul—even faster than wireless backhaul—but it requires home Ethernet wiring.

As IAG readers recall, MU-MIMO (Multi-user Multiple Input Multiple Output) is a must for WiFi networks with multiple devices that simultaneously demand high speeds. For MU-MIMO to work, both router and device must be equipped with the technology. Orbi has it, Google WiFi doesn’t (so says lifewire.com). Devices equipped with standards predating 802.11ac don’t support MU-MIMO.

Before reviewing the specs for each product, first look at this YouTube vid from EBPMan tech reviews comparing the two

First, let’s start with the intangibles. Consensus says that Google WiFi “pucks” are more visually pleasing than Orbi’s nodes since they’re smaller and weigh less with a more aesthetic design. Your tastes, of course, may differ. Google WiFi is more geared toward IoT capabilities while Orbi offers a greater level of parental controls.

Note that Google WiFi is sold with three units (a host and two satellites) while Orbi offers two kits with either one or two satellites.

Also, there’s no shortage of comparisons online between the two. We’ve perused several reviews, making every attempt to include the most accurate and up-to-date information. Alas, the closest we’ve found to actual tech manuals for these products come from—no kidding—Reddit discussion forums.

The verdict between Google WiFi or Netgear Orbi is a choice between simplicity or performance. Orbi is a powerful meshnet kit, reportedly able to penetrate barriers that block lesser systems. Google WiFi is a “set it and forget it” option, perfect for those who want to replace their volcano router but aren’t tech geeks.

True, Orbi costs more but offers more tools for the tech-savvy. If your home pumps over 500 Mbps from your ISP, you’ll be happier with Orbi. Smaller homes with less data-thirsty devices will do just fine with Google WiFi. 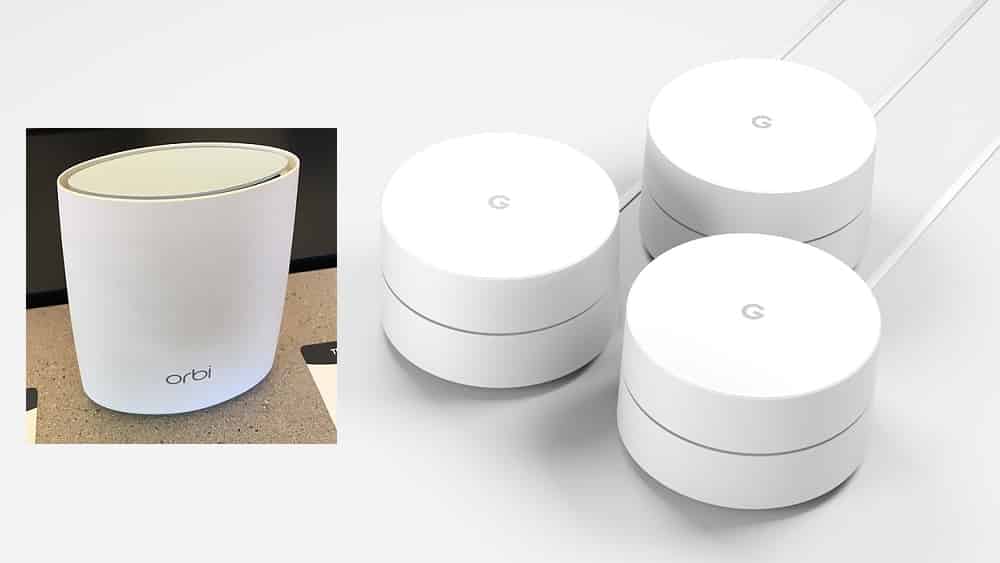