It’s a dilemma worthy of Hamlet’s “To be, or not to be” soliloquy. Is WiFi a “consummation devoutly to be wished?” Does Ethernet “makes us rather bear those ills we have than fly to that we know not of?” Since Shakespeare isn’t around to answer these questions, the IAG “would these fardels bear” and “decide the native hue of Resolution.”

Internet users can opt for the speed and security of Ethernet or the convenience of WiFi. Sensible web bards will choose a combination of both.

Both Ethernet and WiFi standards are overseen by the Institute of Electrical and Electronics Engineers (IEEE). IAG readers by now are no doubt familiar with WiFi’s IEEE 802.11, introduced in 1999 and applicable to 2.4 GHz and 5 GHz. Ethernet technology is known as IEEE 802.3, covering dozens of standards for various applications.

Like VHS conquered Betamax, so Ethernet vanquished wired LAN technology competitors like Token Ring and ARCNET. Fast for its era—16 Mbps—Token Ring was championed by IBM in the early 1980s as a superior technology but after Ethernet switched from coax to twisted pair cabling, Token Ring was soon eclipsed.

Geezer Internet users (we know who we are) remember going online by plugging a cable into a single-line RJ11 jack (for dialup) or an RJ45 jack (for Ethernet) and firing up a desktop PC. While seasoned web warhorses consider laptops as the portable device of choice, many millennials regard them as passé, opting for the more flexible portability of smartphones or tablets to access the Internet.

Using mobile devices, of course, means wireless connectivity with either cellular or WiFi spectrum. Smartphones, tablets, wearables and some IoT devices such as lights and cameras aren’t built to accommodate wired connectivity.

Typically, conventional PC desktops connect to the Ethernet, although WiFi adapters are an option. Devices such as laptops and game consoles can have both wired and wireless options. Printers, once available only with USB or Ethernet ports, now have exclusively wireless models. Some products, thankfully, still have wired and wireless capabilities.

At the risk of belaboring the blinding obvious, going online with WiFi entails finding a wireless network in range and entering a network password. With Ethernet, one connects a cord between a device and a wall outlet with Ethernet wiring or a LAN port on a router.

First, let’s look at the following video produced by Irish telecom company eir on the differences between wired and WiFi connections:

Ethernet standards, too, have evolved. The fastest available is 802.3ae—a blistering 10 Gbps (theoretically) and requires Cat 6-a or Cat 7 copper twisted pair or fiber optic cable. Another common Ethernet speed deployed besides GbE is “Fast Ethernet”—802.3u or 100Base-T—at 100 Mbps.

While this bugaboo affects WiFi as well—read: interference caused by microwaves—WiFi speeds also degrade when several active devices are connected to the same access point. Their signals “collide,” causing significant data transfer delays. It’s why many devices have migrated from 2.4 GHz to 5 GHz, which has less frequency congestion.

Too, distance and barriers such as walls and floors affect WiFi speeds. Ethernet speeds will remain virtually the same across the entire length of a cable (up to 100 meters/328 feet).

In short, Ethernet is still faster than WiFi.

While WiFi’s later releases (i.e., 802.11ac/ax) have greatly improved latency, it still doesn’t stack up to Ethernet. An insurmountable barrier affecting WiFi latency is that WiFi adds another protocol layer atop of Ethernet. Moreover, a wireless device’s latency is also affected as other devices join the WLAN, creating signal interference and degrading connectivity.

To illustrate, bestwirelessrouters.com ran a ping test from a laptop to a router. On Ethernet, the Round Trip Time (RTT) was a constant 1 ms. With the same test using a 2.4 GHz connection over an 802.11n device, the reviewer observed latency delays of 13 ms, 5 ms, 13 ms and 25 ms across the same four data packets.

While this latency is probably less than your smartphone, it’s still problematic for dedicated gamers and could cause problems on video calls. But for people who mostly surf the web online, this level of latency causes no issues.

Nonetheless, there’s no doubt—Ethernet has considerably less latency than WiFi.

IAG readers remember our plaints on WiFi security. Suffice to say that we highly recommend WiFi users, particularly when availing of hotspots, use a VPN while online. Data encryption with WiFi is more or less a necessity; black hats have numerous nefarious means in which to intercept and exploit data transmitted across radio waves.

While not entirely fail-safe, Ethernet data security is much simpler and more robust compared to WiFi. Remote attacks such as MITM are considerably more difficult over Ethernet (but not impossible) since data can only be intercepted by devices physically connected to the wired network.

Indeed, wireless network vulnerabilities are a persuasive argument against deploying IoT devices in smart homes. IoT botnets have been documented as a “constant presence” in DDoS attacks due to the ease at which IoT devices have been hijacked.

Verdict: Ethernet. When deciding between Ethernet or WiFi, security is a primary reason for choosing 802.3.

Of course, the convenience of WiFi connectivity is unsurpassed. The lack of a physical, wired connection allows users to freely move about as they talk or work on their mobile devices.

But there’s more to connectivity than just convenience and freedom of movement. Ethernet provides a much more stable and consistent connection by comparison to WiFi. As we explained above, Ethernet has overall superior signal quality, immune to 2.4 GHz or 5 GHz frequency saturation, and never needs beamforming (spatial filtering) or array signal processing to perform optimally.

Still, let’s go with convenience and give the nod to WiFi for portability and flexible connectivity.

On this front, there’s little doubt which technology has the edge. By its nature, WiFi needs no wired infrastructure other than (maybe) a connection between modem and router. Once a WLAN is in place, a mobile device searches for a network, recognizes it and connects.

Ethernet is not so simple. Unless one is willing to settle for low-speed (10 Mbps) Internet, the customary Cat 3 cable used in most home telephone wiring won’t support the advanced application. There are ways one can maximize data speeds using existing home phone wiring but with high-speed WiFi, why bother?

However, gamers may well object. If Junior complains that he absolutely must have an Ethernet connection in his bedroom for his ongoing Left 4 Dead 2 online tournaments, surely you can find a way to unobtrusively run a cable from the home’s router to his Xbox 360. Make sure Mom approves the cable run.

Yet many if not most of these applications can be served by Ethernet connections and with greater network security. For instance, Power over Ethernet (PoE), transporting both data and electrical power, is ideal for surveillance cameras and access control (e.g., intercoms, keyless entry, etc) and often suited for lighting controllers and fixtures.

Too, media servers such as home theater PCs (HTPC) running platforms like Plex and MythTV are better served by Ethernet than WiFi, especially in homes with multiple devices devouring wireless bandwidth. The same holds for 4K UHD TVs. In truth, all wireless devices compete for existing bandwidth and as a result, performance suffers—particularly for devices that require a constant and consistent data stream.

While an 802.11ac router can (theoretically) serve up to 250 simultaneous connections, it’s also true that, for example, a WiFi router rated at 400 Mbps with 100 connected devices can only deliver—on average—4 Mbps to each. That won’t cut it with today’s data-gluttonous devices.

And, as mentioned above, IoT devices can pose serious internal and external network security risks if not properly secured. At the very least, this means changing the device’s default password and user name. As we recently suggested, use a more secure passcode with 16 randomly mixed-case alphanumeric and special characters.

Our take on IoT and Smarthomes? These devices and apps can be useful and convenient but one should exercise caution in deploying them. If PoE can serve an IoT device without remodeling the home or causing aesthetic conflicts, it should be strongly considered.

As posited at the outset, sensible web bards will opt for a combination of Ethernet and WiFi in the home. In the words of Hamlet, Ethernet has “O, most wicked speed”; WiFi can “confound the ignorant, and amaze indeed the very faculties of eyes and ears.”

But it must be remembered that WiFi bandwidth is a finite resource, and too many horses at the trough will spoil the Internet experience for all. Use Ethernet when you can, and WiFi for convenience and where cables can’t reach. 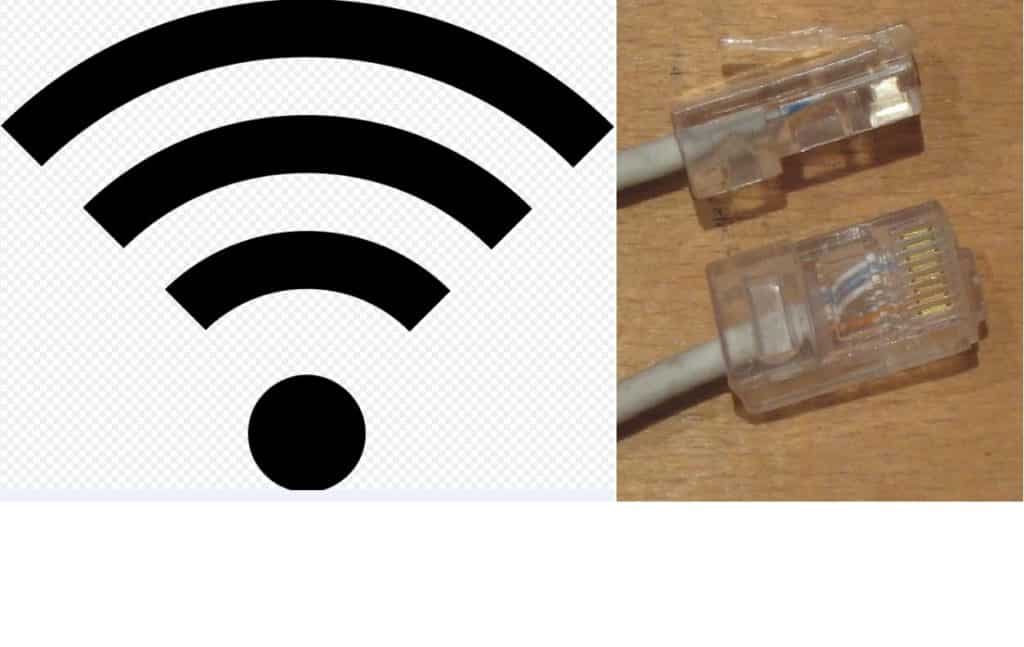