What Is WiFi Signal Strength?

Thanks to the Coronavirus, more employees worldwide now work from home using the Internet. If you’re “telecommuting,” you’re spending considerable time on your home computer and probably noticing some quirks about your WLAN. (We assume you use WiFi.) Like, why does WiFi work better in the kitchen instead of the bedroom? Let’s learn about WiFi signal strength, milliwatts (mW), decibels (dB) and dBm.

Strictly speaking, dBm expresses a ratio of a level of power between decibels and milliwatts. Like the watt, it measures absolute power, which makes it unlike the decibel, a dimensionless unit. Still, dBm is a ratio, and thus is dimensionless yet an absolute unit since a dBm rating compares to a watt’s fixed reference value.

When measuring signal strength in microwave, fiber optic and radio networks, the term “dBm” is frequently used. One can find many definitions for dBm that refer to signal power measurements in wired cables. But it’s also used for measuring WiFi signal strength and is a more convenient point of reference than expressing power levels in mW.

Truth be told, while using mW to measure WiFi signal strength is more accurate than dBm, it’s also a hassle since WiFi operates on extremely low power. Thus, mW WiFi signal measurements result in many, many decimal places with the number zero. (We assume that zero is a number; we’ll let readers debate zero’s existential nature.)

According to Speedcheck.org, “the difference between the two is that RSSI is a relative index while dBm is considered an absolute number representing power levels in mW. Hence, the closer to 0 dBm, the better the signal is.”

What is a WiFi Router’s Power Level?

As mentioned above, WiFi operates on extremely low power. Unlike FM and AM radio stations, which broadcast across miles of coverage, a WiFi signal is meant to encompass only a radius (i.e., “radio cell size”) of about 300 feet (91.44 meters).

Note this number reflects outdoors WiFi range; expect half this distance indoors due to obstructions such as walls, floors and signal interference sources (e.g., microwave ovens and other wireless devices). Also, 2.4 GHz radios have larger coverage areas than 5 GHz radios.

In the U.S., for example, the Federal Communications Commission (FCC) has enacted the following rules for 2.4 GHz and 5 GHz band Tx power:

*1 The FCC terminology of Intentional Radiator is the transmitter power of the wireless equipment, such as a wireless access point, router or bridge.

*2 The FCC ruling states that for every 1dBi the Intentional Radiator is reduced below the initial 30dBm that the antenna gain may be increased from the initial 6dBi by 3dB.

*3 Equivalent Isotropically Radiated Power (EIRP) is terminology for the total RF power radiated by the antenna.

*4 Per Peggy Rouse, “dBi is used to define the gain of an antenna system relative to an isotropic radiator at radio frequencies. The symbol is an abbreviation for “decibels relative to isotropic.”

*1 The FCC terminology of Intentional Radiator is the transmitter power of the wireless equipment, such as a wireless access point, router or bridge.

*2 Equivalent Isotropically Radiated Power (EIRP) is terminology for the total RF power radiated by the antenna.

*3 Fixed point?to?point in the UNII?3 band may utilize directional antennas up to 23 dBi gain without any corresponding reduction of the Intentional Radiator’s RF output power. If antennas higher than 23 dBi gain are utilized, a reduction of 1 dB is required for every 1 dB increase in the antenna gain above 23 dBi.

Need to measure WiFi signal strength? Use a network analyzer; the IAG previously discussed the WiFi analyzer from a.farproc.com, available on Google Play. It’s meant for use on Android devices.

For laptops and desktops, there’s inSIDDer from Metageek, available for Windows and macOS platforms. Or try NetSpot, compatible with Windows and Android devices as well as MacBook.

Other WiFi analyzers include:

Note that many of the analyzers have free versions available. So, unless you’re a network admin of a large company, you won’t need an enterprise-level product.

Watch this video tutorial on the farproc WiFi analyzer to get an idea what you’re looking at when you test for WiFi signals in your home:

Refer to the table below to see if the WiFi signal your device receives is suitable for your use.

PCs (i.e., devices running Windows) use several ways to determine WiFi signal strength. One way, of course, is to check the device’s taskbar in the lower right corner, next to the time and date. Here, you’ll find a series of five bars; one means the weakest signal, five means the strongest signal. Should a red “X” cross through the bars, there’s no WiFi signal at all. In this case, most likely the device’s WiFi radio has been turned off.

Other, more involved methods are also available. Users can go to “Settings” (on Windows 10) or the Control Panel (under “Network and Internet,” then “Network Sharing Center”). Even more convoluted (and risky) is using Command Prompt or Window PowerShell (both accessed from the “Start” menu). See more about these methods here.

However, none of these tools provides actual dBm measurements. All the user sees is either one to five bars or a rating (viz, “Excellent,” “Good,” etc.) to indicate signal strength. While it may seem pedantic, some of us like to know precisely what signal strength our device receives. This why you want a WiFi analyzer. Network analyzers offer more precise WiFi signal strength measurements and other useful tools.

Keep these considerations in mind when considering WiFi signal strength:

1. Router location—locate your WiFi router in the center of the residence and as high from the floor as possible. Placing a router in the corner of the building leaks the WiFi signal to the outside, diminishing indoors coverage and inviting unauthorized use. Placing the router on the floor impedes maximum signal strength.

2. Periodically update router firmware—make sure your router receives firmware updates automatically to keep it performing at top efficiency. You may choose either to upload updates automatically or do them manually. (We prefer the latter.) Too, rebooting the router from time to time is also a best practice.

3. Should you have a device that requires a consistently strong WiFi signal (i.e., a Roku Streaming Stick or an Xbox), locate the device as close as possible to the router to improve connectivity and device performance. 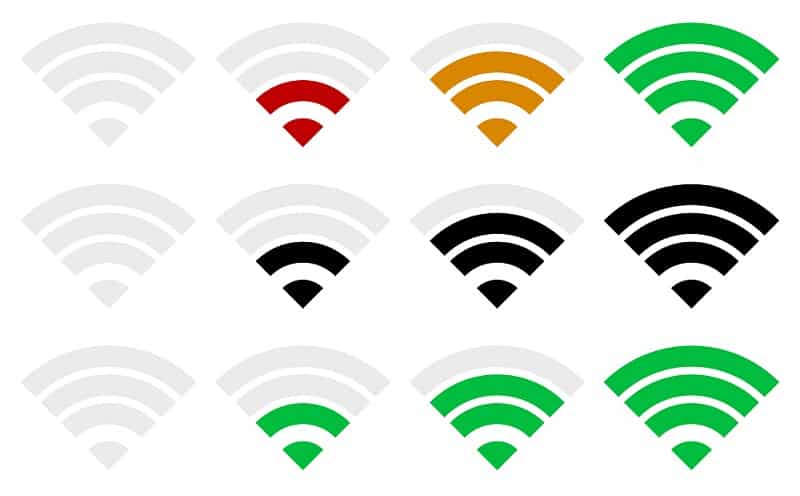