Wi-Fi extenders have become a literal blessing for internet users who are struggling with internet coverage. This is because it is connected between the router and the location where you want to improve the wireless internet coverage. It is designed to capture the existing wireless signals from the router to extend the signal broadcasting. So, if you are struggling with coverage issues, we have TP Link RE500X vs RE505X comparison in this article to help you choose the right extender for your space.

TP Link is one of the best brands that you choose to improve the wireless internet performance and coverage, and RE505X is the first one that caught our attention. It is designed to extend the reach of a Wi-Fi 6 router and has a plug-in design, which makes it convenient to install and operate. The extender is compatible with every router, irrespective of the wireless technology and brand. In addition, it can be connected to the TP Link router for setting up mesh nodes.

This is a compact extender, but if you open the two external antennas that it has, the total height of the extender will be increased to 8.2-inches. There is a two-legged plug on the extender’s back, which ensures easier connectivity with the electrical outlet. There are four LED light indicators on the front side, and the power light glows in blue color when it’s turned, but during the startup, the power light glows in green color. Moreover, there is a signal light (blue light means an active connection, and the red light means a weak connection).

As far as the other two LED indicators are concerned, they are designed to show 2.4GHz and 5GHz connectivity. On the left side, there is a gigabit LAN port, while the right side entails a WPS and reset button. It has been integrated with a tri-core processor with 1.5GHz power, promising high-speed functionality. On the 2.4GHz band, you can achieve 300Mbps speed, while the 5GHz band promises a maximum internet speed of 1200Mbps.

The extender and its features can be easily controlled by the Tether smartphone app or the web-based interface. On the web interface, you can access the power scheduling and whitelist and blacklist settings. The smartphone app is quite easy to use, and you can even set up the extender with the smartphone app. The only thing you need to be worried about is its slow performance on the 2.4GHz internet channel, so just invest in this extender if you use the 5GHz channel.

With everyone upgrading to Wi-Fi 6 routers to achieve a high-speed internet connection, it’s essential to opt for a well-designed extender. While Wi-Fi 6 routers promise improved internet speed, there are still some chances of dead spots where internet lags, hence the need for a Wi-Fi extender. This is a Wi-Fi 6 extender, which makes a perfect choice for people who tend to connect multiple devices to the internet network or have TP Link routers with a OneMesh feature.

TP Link RE500X has been integrated with a tri-core processor that promises seamless and consistent internet on multiple devices. Since it supports OneMesh functionality, setting it up your TP Link modems and routers will be extremely easy. As compared to TP Link RE505X, this wireless extender promises seamless internet speed at the 2.4GHz band. In addition, it has been designed with an Ethernet port to create a one-on-one wired connection.

The extender can be connected with the smartphone app for set up and to make changes to the settings. On the other hand, you need to remember that it doesn’t support WPA3 encryption and downloading the firmware updates can be challenging. It weighs around 225g, which makes it a rather bulky extender. There are LED indicators designed on the left edge, while the right side has a WPS and reset button. In addition, the right side has an Ethernet port that supports internet speeds over 1Gbps.

On the sides of the extender, there are huge ventilation grids that prevent overheating, and there is a dual-band configuration. There are two internal antennas that improve the signal reception and broadcasting. In addition, there is a two-by-two MU-MIMO feature available for wireless transfers. As far as the internet speed is concerned, the 2,4GHz band gets 300Mbps internet speed while the 5GHz band gets 1201Mbps speed. 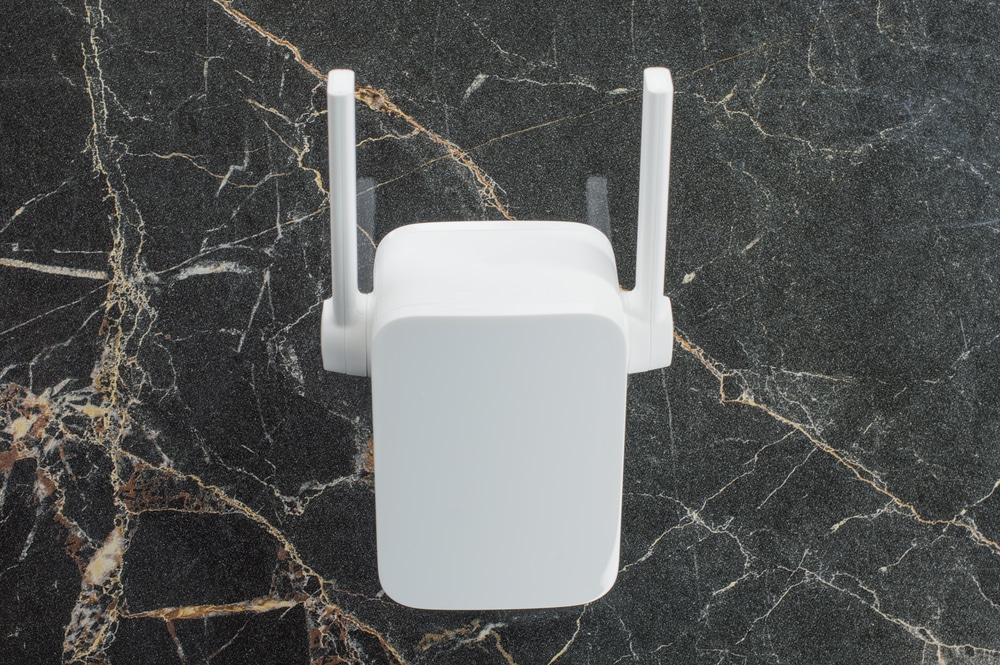