Last year in our article on microcells and picocells, we briefly visited today’s topic, Distributed Antenna Systems (DASs). A viable alternative to microcell and picocell technology, it deserves its own discussion here in our corner of cyberspace. In fact, it’s more than just viable; DAS is a superior choice for cellular network deployment both indoors and out for reasons shown below.

DAS, as Wikipedia explains, “is a network of spatially separated antenna nodes connected to a common source via a transport medium that provides wireless service within a geographic area or structure.” Outdoor deployments are stylized as “oDAS” while indoor deployments are, yes, “iDAS.”

Generally the elevation of a DAS antenna is “at or below clutter level,” a reference to undesirable echoes found in electronics systems. Clutter is a particular problem for radar (the federal government’s National Weather Service notes “ground clutter generally appears with a radius of 20 nautical miles” of a radar station). But clutter can affect cellular and Wi-Fi networks as well by impeding, dampening and reflecting radio frequency (RF) signals.

Consider the diagram below: 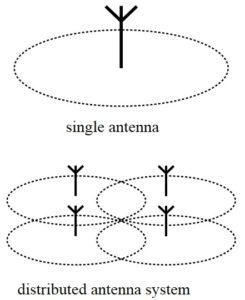 Both coverage areas are essentially the same. However, for a number of reasons the DAS model provides greater network reliability compared to the single antenna picocell/microcell/macrocell system. One is the occurrence of more line-of-sight connections, which means a reduction in both fade depths and delay spread. Moreover the DAS model uses less power compared to a single antenna network since coverage range, RF penetration and shadowing losses are all reduced (which implies the use of comparatively high RF). For the RF naifs among us, here is a quick glossary:

Practically speaking, DAS is an efficient means of dealing with isolated network coverage “dead spots” with the use of relatively small antennas—which serve as repeaters—dispersed across a coverage area. Each antenna is physically connected (typically with fiber or coax) to a central controller or “headend” which in turn connects to a wireless carrier (e.g., Verizon, AT&T) via an outside antenna to a network’s base station. Herein lies an important consideration; DAS operates over licensed RF spectrum, not Wi-Fi. It’s not as simple as installing wireless access points across a retail store or office building.

When installing a DAS system, at least one MNO (wireless carrier) must be involved in the undertaking. In the case of a DAS serving a stadium for a major sporting event, the “headend” provides signals for multiple MNOs. Each MNO then backhauls its own signal for switching on its network via dedicated optical fiber.

In this RCR Wireless News video, Morgan Kurk of CommScope diagrams a network topology of an indoor DAS system:

As the video above indicates, an iDAS captures RF with an outdoor antenna from the nearest MNO base station for distribution across the facility served. Although more expensive to install and maintain compared to single antenna picto-, micro- or macrocells, an iDAS is a comprehensive solution for the demands of wireless users indoors. Unlike the others, an iDAS can access multiple networks and needs only one set of antennas and one backhaul connection to serve the entire network. Functioning as an in-building cellular site, an iDAS base station sufficiently addresses cellular user demand in a building (or bus terminal, shopping mall, etc.) since it’s literally its own stand-alone cell tower.

Given the expense and labor involved and the fact that licensed spectrum is used, an iDAS system is almost always installed by a MNO such as Verizon or AT&T. Nowadays, with cellular networks maxed out from heavy data usage, a separate WLAN with access points is usually constructed in parallel with an iDAS solution. This arrangement allows MNOs to offload traffic to Wi-Fi while freeing the cellular spectrum for more subscriber usage. 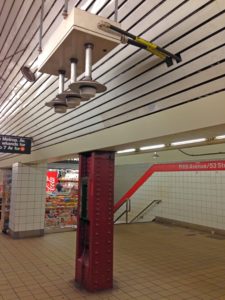 DAS can be classified as either passive or active. A passive DAS describes a topology of a base station, unpowered RF splitters/combiner(s) which separate signals across a network of low-loss coax cables and antennas. An active DAS utilizes bi-directional amplifiers to compensate for signal loss and forgoes the use of splitters/combiners. Either copper or optical fiber can be used in an active DAS network. In the case of fiber, a master fiber node serves a number of slave fiber nodes, typically one per floor of an office building. When fiber is used, the optical signal is reconverted to RF immediately before reaching (or after leaving) the antenna ports.

You, gentle reader, can infer a number of truths from the contrast between active and passive DAS. For one, a passive DAS necessarily serves a smaller area (typically no more than 500,000 ft2)  than an active DAS due to the inherent signal loss that occurs over distance with copper coax cable. Too, passive DAS are relatively inflexible in network design, often requiring large gauge coax cable to deliver signal with sufficiently low loss to distant corners of a facility. Such installations often cause logistical and/or aesthetical conflicts with building occupants and management.

While active DAS is easier to install, offers more flexibility after installation and can serve multiple buildings, its bandwidth capacity can be diminished when compared to passive DAS due to power noise and signal interference since active DAS requires power at various intervals for antenna units and slave nodes. Also, costs of constructing and maintaining an active DAS are necessarily higher than that of a passive DAS.

Hybrid DAS configurations can be utilized in order to defray the enormous costs of constructing a full-blown DAS installation. Powered components transport signal to pre-determined zones of a facility where passive components distribute the signal. While higher powered slave units are required, fewer are needed—thereby lowering overall costs.

Assuming that you are the owner or developer of a property large enough to utilize a DAS, there are a few caveats to keep in mind.