Wi-Fi and Cellular: at first blush, most of us consider them both wireless technologies — i.e., radio — but share little else in common. So how different are they?

Turns out, not much at all. Both use transmitters and receivers. Both use the public switched telephone network (PTSN). Both carry digital signals. (Note that although this article uses the widely accepted term “Wi-Fi,” it would be more accurate to describe it as Wireless Local Access Network or WLAN. Wi-Fi technically is a trademark of the Wi-Fi Alliance and can legally be used for only those products that comply with Alliance functionality standards and certification testing.)

Some less savvy wireless users tend to think that voice and data differ between Cellular and Wi-Fi. This thinking is an analog hangover from the not-so-distant past when plain old telephone service (POTS) was essentially the only option available to most people for communicating with their neighbors and family down the street or across the country. Today of course voice and data are digitized into data streams, equally accessible on both SmartPhones and laptops/tablets/PCs.

Below is a brief demo video on the Apple iPad mini with Wi-Fi and 4G LTE Cellular:

In fact, the latest generation of SmartPhones have what is known as Fixed-Mobile Convergence (FMC), offering both Cellular and Wi-Fi capabilities. It provides seamless service (i.e., no perceptible interruption in voice/data transmission of a call in process) between Cellular and Wi-Fi. So the demarcations between voice and data as well as Cellular and Wi-Fi have been erased completely. Note that FMC covers much more than Wi-Fi to Cellular and vice versa. For example, it applies to hardwire connections like cable, T-Carriers and DSL. Now, thanks to FMC, your cell phone can serve as an extension phone from the PBX of your business. But we digress…

There are differences, certainly. Among them: 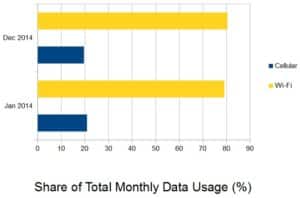 “The truth is spectrum, kiddo. It ain’t black or white. It’s more than grey.” — Toba Beta

Cellular uses a part of the radio frequency spectrum designated by a government’s regulatory frequency assignment authority. In the U.S., the National Telecommunications and Information Administration (NTIA) administers government use of the airwaves; the Federal Communications Commission (FCC) does the same for commercial use. These frequencies are awarded through lotteries or auction and may be sold or conveyed by the original designee to a successor.

However, Wi-Fi operates in the so-called “unlicensed spectrum.” This portion of the spectrum is primarily 2.4 GHz and 5 GHz and is used for Wi-Fi networking because, as IEEE Spectrum’s Terry Ngo says, “these are the only available parts of the radio spectrum that have the range and bandwidth needed.”

What Wi-Fi and Cellular really have in common is a virtual traffic jam. Consider these numbers:

Over 80% of American homes and 50% of those worldwide are in urban areas overrun by people using Wi-Fi. These are the same areas where Cellular users experience the most dropped calls and the slowest connections. Add transmissions from Bluetooth-compatible devices –  which operate between the frequencies 2.4 MHz and 3.5 MHz, the same as the lower Wi-Fi spectrum frequency –  and it’s little wonder why so many connections suffer.

The prognosis is even grimmer. According to the information technology research company Gartner, “6.4 billion connected things will be in use worldwide in 2016, up 30 percent from 2015, and will reach 20.8 billion”  –  an incredible 2.8 connected devices for every person on earth  –  “by 2020. In 2016, 5.5 million new things will get connected every day.” As the Internet of Things (IoT) becomes more entrenched in everyday life, look for this saturation of the airwaves to intensify.

The lust for speed by mobile device users is causing gridlock throughout the airwaves. Increased speed means wider bandwidth which means fewer paths available for use within the frequency spectrum. As people have migrated to WLANs from cable-connected Ethernet LANs, more and more wireless routers have appeared, not only in homes but in public hot spots as well.

The spectrum shortage affects Cellular too. With each evolution of technical standards  –  from 2G to 3G to 4G  –  cellular territorial coverage has plummeted. The progression from 2G to 3G , for example, shrank tower coverage by 20%. 4G takes an even bigger cut. And with the proliferation of SmartPhones and their bandwidth-hogging apps, carriers are migrating traffic when possible into the already-crowded Wi-Fi spectrum.

Thus cellular airwaves are just as crowded as those at the higher end of the spectrum. The switch from hardwire to wireless can be likened to commuters changing from public transportation to driving their individual cars, causing traffic jams in their neighborhoods but traveling unimpeded once they enter a freeway. Similarly, once calls/data get past the choke point of the radio spectrum and into the copper/fiber environment of the PSTN, there’s plenty of routes and capacity available.

1. Build more infrastructure. Seems obvious but now that that SmartPhone markets are maturing (i.e., pretty much everyone who wants a SmartPhone already has one), carriers are loathe to sink more capital investment into adding to or replacing existing network hardware. One strategy to reclaim cellular coverage and increase capacity at a relatively low cost is the deployment of Distributed Antenna Systems (DAS), e.g., microcells, picocells and femtocells. One microcell can easily cover a small college or high school campus. One may consider picocells and femtocells as Cellular’s version of the Wi-Fi hot spot; they’re ideal for placement inside buildings and address the issue of signal loss through buildings. On the whole, a microcell’s range is less than 1¼ miles (2 km) wide, a picocell 650 feet (200 meters) wide and a femtocell 33 feet (10 meters) wide. One other point: in most cases, the costs of installing and maintaining DAS micro-sites will be borne by the venue or host, not the carrier. See the chart below on Total Cost of Ownership (TCO) Comparison:

2. Expand Wi-Fi coverage into existing cellular base stations. Again, a fairly obvious solution. Base stations can easily hold hundreds of Wi-Fi transceivers within a cell tower footprint along with Cellular transmitters and receivers.

3. Increase the number of Wi-Fi hot spots. Estimates are that by the end of 2014 there were almost 48 million hot spots — a Wi-Fi access point for every 150 people — across the globe. As the Internet of Things (IoT) becomes further entrenched in everyday life and machine-to-machine (M2M) communications proliferate, the number of Wi-Fi access points will have to increase exponentially. And so it will: iPass predicts that by 2018 there will be one public hot spot per every 20 people worldwide.

One other development only beginning to appear on the radar screen, so to speak, is the coming availability of 150 MHz of the 3.5 GHz band. Suitable for wireless broadband, a 100 MHz portion of this portion of the spectrum was previously reserved for military radar use. On 15 April 2015 the FCC approved use of this “Innovation Band” for commercial wireless networks. However, it will be years down the road before the rollout of this portion of the spectrum occurs.