Last time in this space during our discussion on AT&T’s Microcell™ we mentioned the benefits of  cellular signal boosters. Unsurprisingly, a signal booster needs both an outside antenna to capture signal and an antenna used inside a building to rebroadcast an amplified signal. Today we’re looking at outdoor antennas, specifically the Yagi or unidirectional antenna.


In our look at HD Antennas, we dealt briefly with Yagi antennas. Properly called a ‘Yagi-Uda’ antenna after its Japanese inventors Shintaro Uda and Hidetsugu Yagi, they’re designed to increase signal gain in excess of 10 dB. When pointed in the direction of a radio signal, a Yagi antenna narrows the signal’s bandwidth through the use of directors and reflectors.  It’s also known as a “beam antenna” or a “parasitic array” and is commonly used on HF, VHF and UHF radio bands in fixed-frequency applications.

Since the Yagi has a unidirectional (or “end-fire”) beam pattern, pulling in signal across a 45°-90° directional field, it’s not appropriate for use on moving vehicles which require the ability to receive radio signals from all directions. Best known for its deployment on house rooftops, the Yagi is also utilized in P2P fixed communication links, radar antennas, long-distance shortwave broadcast stations and ham radio operations. 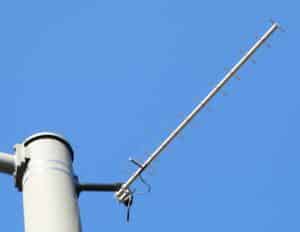 Since today we’re concerned with the use of a Yagi antenna with a cellular signal booster, it should be noted that unless all cell towers lie in one direction, a Yagi is generally good for use with only one carrier. This fact works against the flexibility of a cellular signal booster, which is “carrier-neutral” and works over a range of frequencies (as opposed to AT&T’s MicroCell™) and with all MNOs (our favorite acronym appears again—Mobile Network Operators or cellular phone companies). Hence, Yagis are favored by those who live in remote rural areas where choice of MNO is of secondary consideration. They do wonders boosting 3G and 4G signals when the distance of cell tower causes spotty reception.

Note that you need some sort of signal for any antenna to work. This isn’t wireless alchemy where a device transforms thin air into a radio signal. If there’s no reception—i.e., 150 dB—an antenna and signal booster will do you no good.

Don’t know the direction of your carrier’s cell tower? We’re here to help. Go to antennasearch.com and enter your street address. You’ll find the location of all cell towers within a four mile radius.

Alternatively, your mobile device has the native ability to measure your dB signal (as opposed to checking for signal “bars” on your device’s display screen). Visit here and try option 4. You’ll find instructions for both iOS and Android devices.

Consumers should be forewarned that a manufacturer’s Yagi antenna model may be limited to certain bandwidths of the spectrum. A case in point is the Wilson Electronics 13 dB 800 MHz 8 Element Yagi Cellular Antenna, available on Amazon. As alluded to in the product title, this antenna only receives radio signals between 806 MHz – 940 MHz. This portion of the spectrum in the U.S. is reserved for  GSM 2G communications (now abandoned by almost all U.S. MNOs but still widely used elsewhere) and Specialized Mobile Radio (SMR) applications—think 2-way radio communication between a dispatcher and a taxi driver, for example.

Given the MHz range of this antenna, its usage is limited to some U.S. MNOs and their associated MVNOs. These include AT&T’s (and its MVNO Cricket Wireless) UMTS 3G network operating at 850 MHz, Sprint’s (including Boost Mobile, Virgin Mobile USA and many other resellers) CDMA2000 network found at 800 MHz and U.S. Cellular’s CDMA2000 network at 850 MHz.

While Verizon is not included on this list since it operates in the 700/1700/1900 MHz portions of the spectrum, at least two Amazon reviewers have reported using this antenna with their Verizon mobile devices. The only explanation your intrepid blogger can offer is that this antenna receives radio signals at 700 MHz in addition to its rated 806 – 940 MHz range.

This brief video from Wilson Electronics demonstrates how to install their Yagi antennas. Note that the phone used is from Sprint.

A more versatile product is the weBoost 700-2700 MHz Wide Band Directional Antenna which has the capability to be used with any MNO’s network. While it also can receive 2.4 GHz Wi-Fi, it should be noted that most routers/Wi-Fi cards don’t have the capability of connecting with external antennas. Too, even though the dB gain rating for this antenna ranges between 7.3 and 10.6, YMMV given the losses associated with coax cable and number of connectors used. Caveat emptor: higher bandwidths require low-loss coax cabling and a minimum of connectors for best results. For use with both 3G and 4G networks.

This episode of “What’s In the Box” from Hitfar shows how to install a weBoost external antenna as well as the various elements needed to boost cellular signal inside the home. The carrier is Rogers Wireless—a Canadian MNO—but what’s demonstrated in this video applies to any signal in the rated MHz range.

One other model we’ll mention is the Phonetone 11 dB Outdoor directional Yagi 800/850/900 MHz GSM antenna. Again, like the Wilson Yagi antenna mentioned above, its range is limited to the lower end of the frequencies used for cellular service. On the other hand, it features an economical price and boosts signal gain to 11 dB.

By now, our readers grasp that more than an outdoor antenna is needed to boost cellular signal indoors. Cables, connectors, boosters and an indoor antenna are all required. Adapters may also be needed, depending upon your specific installation. Just remember that simple is best. Splitters, connectors and excessive cable runs all add signal loss. You don’t want to lose the dB gains you receive from an outdoor Yagi antenna on low quality coax cable. 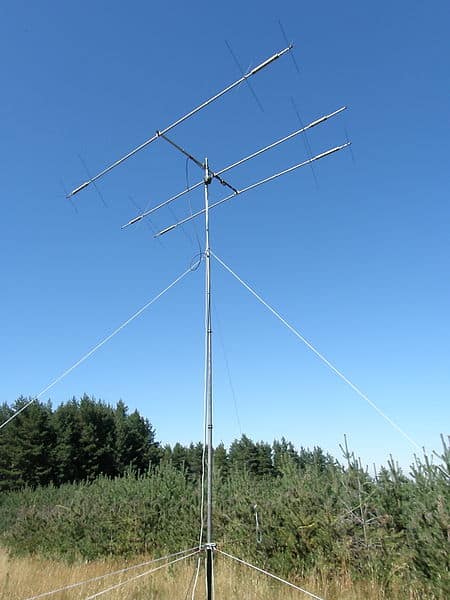