NAT and RIP are two routing protocols. Sometimes, people got really confused in choosing between NAT and RIP. Performance and popularity-wise NAT is the most used routing protocol. However, RIP is one of the oldest routing protocols to exist. Much thanks to the features of network routing that are available on Windows Server. Using these networking features, you can easily transform your server into a router. moreover, you can also manage port forwarding if you want to. Although, many people claim that their network routing works best with NAT.

In this article, we have pinpointed the main functioning differences between both of these routing protocols.

What Do Routing Protocols Do?

The main functions of the routing protocols are:

Routing protocols are responsible to specify the communication between the routers.

Routing protocols identify the fair distribution of information between two routers in contact.

Moreover, routing protocols enable those routers to select the effective routes between two random points of nodes over a computer network.

The generated algorithms for routing identifies the particular choice of route. Although, each of the routers within a network possesses prior knowledge of the directly attached networks.

A routing protocol is responsible to distribute the possessed information firstly among immediate neighbors. After that, they send it throughout the network. This way enables the routers to gain enormous knowledge of the network topology.

What Is Network Routing?

Network routing is one of the most common functions of network function. We also call it routing. Routing is the process by which a path is selected over a network. It also deals with the traveling paths for a single network or multiple networks. In a wider sense, network routing can be carried out with the help of many networking types such as circuit-switched networks, public switched telephone networks, your peculiar computer network, or simply the Internet network.

For a better understanding of which routing protocol is better to use, you must know the definitions and prior description of NAT and RIP.

The NAT is a short form for Network Address Translation. NAT is the process by which a firewall (a networking device) begins to assign some random public addresses to a computer system or a whole lot of computer systems within a private computer network.

NAT is mainly responsible for carrying out economic and security purposes. It basically tends to limit the maximum number of IP addresses within an organization or a company.

Here’s the range for such network translation:

These private IP addressing schemes have a good scope for a few types of computer systems. It involves those computer systems that only access resources available within the network. For example, workstations that need straight-up access for the file servers.

Those routers that are involved within the private network have the tendency to route huge network traffic between private addresses within a matter of minutes. On the contrary, for accessing enormous resources located outside their private network such as the Internet. So, for internet networks, these protocols need to have a single public address for delivering better responses upon the requests to have them returned. In such network functioning, NAT comes to the rescue.

RIP is considered as one of the oldest vector routing protocol. It is rarely used these. However, it still does have a lot to function. So, here we go. The Routing Information Protocol (RIP) employs the hop count in the form of a routing metric.

Moreover, RIP restricts the routing loops by the implementation of an accurate limit over the total number of hops that have access within the traveling path starting from source to destination.

Factually, if you have RIP, you don’t have to keep a separate router for routing as the router just needs to locate the default gateway/router. On the other hand, you strictly need NAT to have your multiple devices get quick internet access on the local network (LAN). 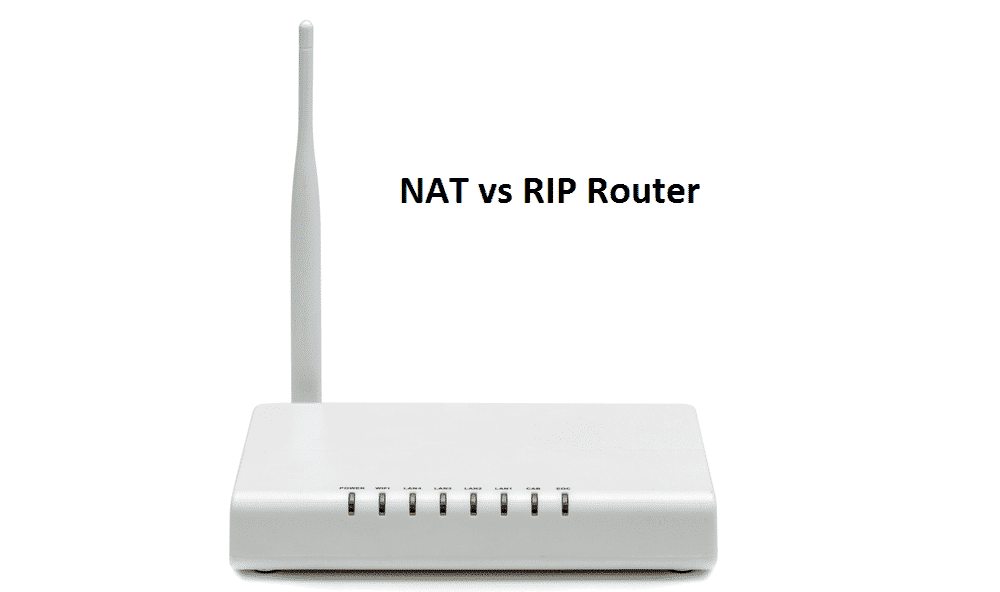