Acquiring high speed broadband Internet in remote areas can represent a challenge, even with the number of options that are currently available. Many residents that enjoy living in the wilderness are often underserved which is where ViaSat Exede Internet may be of help.

Trying to achieve high speed Internet in the wilderness or extremely remote areas can be a challenge for those that prefer to live in the country. In some areas, some people have had to go as far as negotiating with the local cable company to convince them to run a line a few miles out of the scope of their coverage area. Other people have gone as far as investing a lot of money in a dedicated T3 line in order to enjoy the benefits of high speed broadband Internet.

In recent years, satellite Internet has become the only alternative for receiving a high speed broadband Internet connection. However, depending upon where you are located, you may experience problems such as low bandwidth, intermittent service, latency, weather related issues and other problems. Additionally, this usually comes at an excessive monthly cost as well.

ViaSat Exede Internet claims to get around the traditional issues with rural broadband connectivity by offering a high speed satellite service that has wider availability than the conventional well-known satellite services. However, depending upon how much data you consume, this option can make sense or it can prove to be a costly proposition.

What is Exede Internet?

Exede Internet was launched in late 2011 and has since implemented technology that powers high speed broadband service to residents in remote areas. The Internet signal is provided by a technology known as ViaSat-1 which claims to deliver Internet download speeds of up to 12 Mbps as advertised.

Exede broadband speeds are supposedly eight times faster than the company’s original service known as WildBlue. The technology involves an Internet signal that is transmitted to a satellite from Exede’s ground stations. The signal is then transmitted back to a rural residence using a small satellite dish that is mounted on your home. A cable is then run into your home to establish a connection to the modem which in turn, establishes your connection via wireless router or a connection that goes directly to your PC.

Although this appears to be the same configuration that other providers such as HughesNet use, Exede claims the technology they use is state-of-the-art and provides a faster and more reliable connection. Even if you live in a remote area where you have experienced intermittent service in the past. Additionally, regardless of the package you choose, you always receive download speeds of at least 12Mbps (megabits per second).

When you sign up for Exede Internet services, the high speed broadband Internet signal relies on a satellite dish that is only 28 inches in diameter. The dish can be mounted in a variety of ways with the most common method involving a roof mount. This ensures that the dish has a direct line of sight to the Exede satellites in outer space. If your location allows, you can also choose to mount the dish on a pole or on the side of your residence.

As long as there is a clear view of the southern sky, it is possible to achieve a high speed broadband connection into your home. If you live in a densely wooded area, this may present a challenge since the Exede technicians will need to find a space in the trees to ensure a fast and reliable connection at least 99 percent of the time.

The following video discusses how Exede Internet works with discussions on how the technology holds up in extreme weather conditions.

Exede also uses ViaSat technology which is produced by ViaSat, a US company with a long standing track record in government and military communications. The advanced satellite technology is different than the technologies that are used by other satellite Internet services. These services often use an infrastructure that is extensive and unavailable in many remote areas.

Exede satellite Internet can be setup virtually anywhere has shown in the following video.

This package is offered at a monthly price of $49.99 for unlimited access to email and web pages and up to 15GB (gigabytes) of data per month for everything else. This plan also offers download speeds of 12 Mbps and upload speeds of 3 Mbps with an Early Bird Free Zone that provides unmetered access between the hours of 3 am to 8 am.

Freedom is a new package offered by Exede at a cost of $69.99 per month. This plans provides you with unlimited access to everything for the first six months. Then you have unlimited access to email and web pages with up to 20GB per month for everything else. This plan also offers download speeds of 12 Mbps and upload speeds of 3 Mbps. Similar to the Evolution package, there is an Early Bird Free Zone with unmetered access between the hours of 3 am to 8 am.

The Freedom package is offered at a cost of $99 per month with unlimited access to everything all the time. This package offers download speeds of 12 Mbps and upload speeds of 3 Mbps and suits those who want to do whatever they want when they want, including the consumption of high definition video streaming.

For any of the above Exede Internet plans, you can add DirecTV and voice services for a cost of $29.99 each with a price break on your Internet service.

Additionally, there are no unexpected price increases and Exede does not implement automatic price increases after a certain period of time has passed. All of your payments can be made online and you can use your online account to keep track of data usage, view your bill, and update your personal and financial information.

In terms of broadband speed performance, ViaSat Exede has done quite well in speed tests. In one instance, a test that lasted one week clocked the broadband speed at 12 Mbps as advertised with a speed of 14 Mbps reached at one point for downloads. Other times the download speeds were reduced to as much as 8 Mbps with an upload speed of about 1.9 Mbps which is less than the advertised upload speed of 3 Mbps.

Another test performed on latency which is the length of time it takes for your website request to go out on the Internet and back, averaged at around 750 milliseconds. This is much higher than a standard Digital Subscriber Line (DSL) or cable broadband connection.

Overall, the download and upload speeds are quite acceptable for a remote area and you can stream videos without problems with slow downloads and buffering. Plus, conducting voice conversations using VoIP services such as Skype seem to perform quite decently as well.

Sometimes, one of the primary drawbacks of a satellite Internet service is weather conditions. If you live in a cold climate, snowstorms can present a problem with service continuity. Additionally, climates with habitual bad weather such as heavy rain and hurricanes present an issue as well.

Most customer feedback points to the fact that Exede Internet can be disrupted by weather conditions. However, as in the video posted earlier in this article, performance has been largely unaffected by extreme weather conditions.

As far as the quality of tech support goes, Exede Internet services offer around the clock tech support 24/7 using a dedicated tech support line. If the problem does not require immediate attention, you can opt to use the email ticket feature on the Exede support page.

As you research Exede Internet as an option for obtaining a high speed Internet connection in a remote area, you will find mixed reviews of the service. In the meantime, here are some of the pros and cons for using ViaSat Exede Internet:

Although ViaSat Exede high speed broadband Internet cannot be considered to be a replacement for a cable connection or Digital Subscriber Line, the service has shown to be an improvement over the other satellite services that are available. The data allowance is generous and the service is available in more areas than other typical satellite Internet services.

If you are a die-hard gamer, then this may be the deal breaker when considering Exede Internet as an option for high speed connectivity. But for those who can tolerate occasional latency problems and a degree of patience when surfing the Internet, Exede Internet can prove to be a viable option when other satellite Internet services are unavailable or simply do not work for your geographic location.

Recently ViaSat Exede released an Internet plan that serves the low country of South Carolina. Additionally, ViaSat Exede rolled out high speed broadband Internet to the general aviation market as well. This helps to move ViaSat forward with extending high speed broadband Internet to more areas and additional markets as the company continues to expand its connectivity offerings to both individuals and businesses alike. 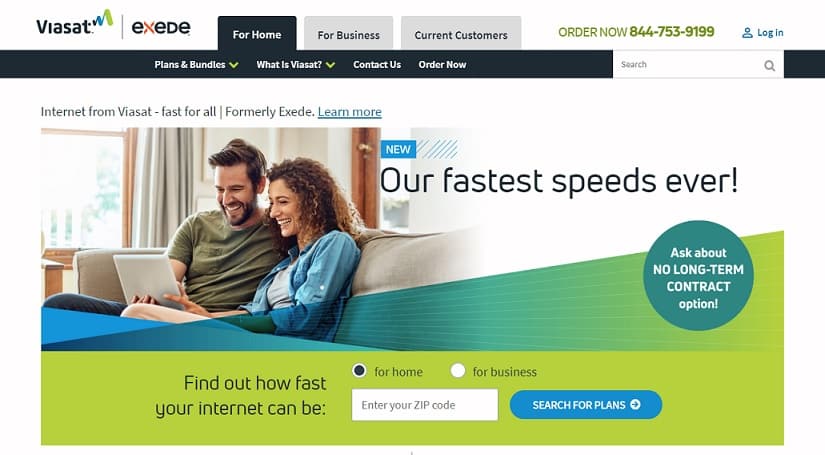