VSAT is a technology that represents another option for Internet connectivity in extremely remote areas and distant field locations. But, what exactly is it and how does it work?


If you live in a remote area, then you are aware that there are a limited number of options when it comes to telecommunications and Internet connectivity. This is especially true for field operations which are required to function in remote areas such as at sea, in the field, and in distant locations such as on oil rigs and utility services.

In terms of options, satellite communications represent the answer for most people in remote areas and one of the forms of this type of communication is known as VSAT which stands for Very Small Aperture Terminals. VSAT is specifically designed for remote locations and is a more cost effective alternative to conventional satellite communications services such as HughesNet, Dish Network, and others.

If you are unfamiliar with VSAT, the information in this article will provide you with a general understanding of what VSAT is, how it works, and some of the purposes for which it is used.

Very Small Aperture Terminal (VSAT) is technology that is commonly referred to as a private earth station. The earth station is designed to transmit and receive data signals via a satellite signal. VSAT includes the term “very small” which refers to the size of the antenna on the VSAT dish.

The antenna typically measures about four feet in diameter and has a low-noise converter attached to it which receives the satellite signal, and a Block Upconverter (BUC) that transmits the signals for the radio waves. The antenna can be positioned on the ground or it can be mounted on a rooftop.

VSAT is designed to serve both businesses and individuals and involves the use of specific technology and devices that are designed to facilitate effective telecommunications and Internet connectivity. A VSAT connection is established through the use of the antenna system described above. Your PC or mobile device communicates with the antenna and then the antenna uses the transceiver components to send and receive signals from the satellite.

When the system is comprised of multiple users, in order to establish communications with one another the data must be transmitted to the station-based PC which sends the signal to the sky satellite. The satellite sky transponder then forwards the data transmission to the end user’s VSAT antenna and finally to the end user’s device. In addition to data transmission, a VSAT system can also handle voice and video.

VSAT can be used by both home users who sign up with a primary VSAT service and by private organizations and companies that lease or operate their own VSAT infrastructure. A main advantage of VSAT is it provides companies with complete control over their own communications infrastructure without having to depend upon third party sources. You can also receive telephone reception at a higher rate of speed than if you use a conventional Internet connection.

The Anatomy of a VSAT Star Network

Typical VSAT satellite communication networks consist of more than one user, especially if the network is designed to accommodate military operations, workers at sea, corporate entities, or remote field workers. The VSAT network provides organizations with more control over their own network communications without having to rely on other companies or middleman type of setups.

VSAT communication systems which accommodate multiple users are commonly known as a VSAT Star network. A Star network is configured through the use of multiple remote VSAT antennas which are dispersed throughout designated locations and then controlled by the central hub PC. The hub also is equipped with a central antenna which is connected to the central office for the organization using a VSAT system.

The complete VSAT configuration including equipment is provided by a VSAT service which leases the satellite connection from a satellite provider. The VSAT service provider monitors the central hub plus, they may have other customers which offsets the cost of the equipment and the lease of the satellite connection. This also means that the central antenna constructed at the hub may serve many remote VSAT antennas depending upon the number of customers.

VSAT can also use mesh topology in which one terminal transmits data to another terminal using a satellite as a hub. This reduces the need to establish an uplink site.

Star and mesh topology can also be used in conjunction with one another. This is achieved by establishing multiple uplink sites that are centralized and connected together to create a multi-star architecture. The advantage of this configuration is it costs less in terms of network maintenance and it reduces the amount of data that must be transmitted through one or more uplink sites.

The following video talks more about the anatomy of a VSAT network.

VSAT satellite communications can be used for both individuals and organizations due to its capacity to provide small private networks or larger networks which require multiple VSAT antennas. The costs associated with VSAT implementation can be on a pay as you go basis. This means if the VSAT network is going to eventually grow, you can leverage scalability by implementing the necessary equipment in small steps to reduce the cost impact.

Regardless if you are an individual using a VSAT system or an organization, most users desire to make their connection wireless. So the first question that always comes up is how to create a wireless connection with VSAT and whether or not you can use a conventional wireless router.

The answer to this question boils down to capacity of the VSAT satellite communications system. For example, some VSAT service providers offer connections that have a higher capacity or throughput and, in this case, it is necessary to choose a wireless router which is capable of handling a higher capacity connection. This is especially true for larger organizations that deploy VSAT communications systems.

On the other hand, if you are a residential user, the chances are that the VSAT service delivers a normal capacity connection. In this case, you can configure your home network with a typical router which is designed for residential use.

Pros and Cons of VSAT

Although VSAT has been widely used for some time now, like anything else there are advantages and drawbacks to using this type of technology for communications and Internet connectivity. Let’s take a look at some of the pros and cons of VSAT.

How to Acquire VSAT

One of the largest VSAT networks consist of more than 12,000 sites which are administered by Spacenet and the United States Postal Service. Some of the companies that utilize large VSAT networks include Walgreens Pharmacy, Wal-Mart, Taco Bell, Ford, General Motors, and many others. VSAT is used to transmit data such as sales orders and figures, service bulletins, international communications, and other types of data and communications.

VSAT and the benefits it provides are being recognized in both the public and private sector. Many financial institutions, healthcare organizations, educational institutions, rural telecommunications providers, and other entities are using VSAT as a means to increase standards across many different fields.

This is accomplished using interactive data, system control and data distribution, broadcast data for commercial networks, and business video applications. VSAT technology has been in use for more than a decade and currently there are more than one half million systems operating in over 125 countries worldwide. 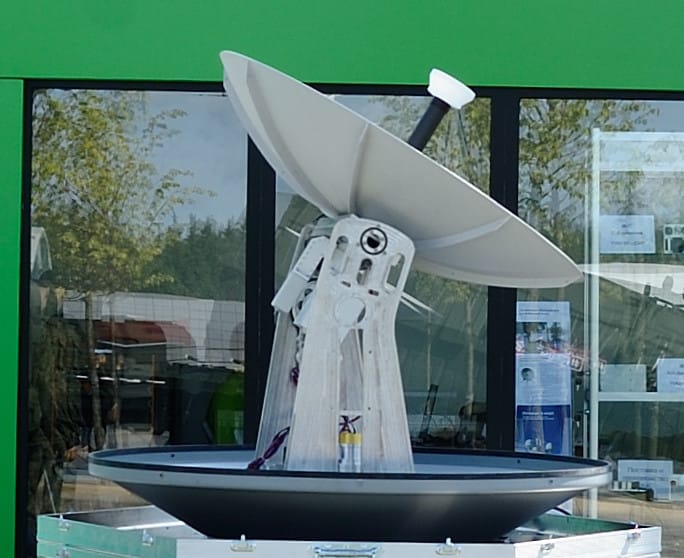 2 thoughts on “VSAT Defined: What is it and How Does It Work?”