The terms “WiFi” and “wireless” are often confused when referring to Internet connectivity.  Basically these words are synonymous with one another and mean Internet connectivity without wires.  WiFi stands for Wireless Fidelity and is used to create a wireless Local Area Network or WLAN that allows PCs to transmit data to one another without the use of cables.

So what exactly is WiFi and wireless Internet and how does it work?

WiFi and wireless Internet is commonly referred to as 802.11 which is a standard that is set forth by IEEE or Institute of Electrical and Electronics Engineers and one of the largest technical professional organizations worldwide.  IEEE sets the standards for wireless technology and publishes a high percentage of the literature with respect to electrical engineering, computer science, and electronics.

The 802.11 standard which sets different protocols for wireless networking such as 802.11g and 802.11n defines the wireless connection in terms of speed for data transmission.  The most popular current standards are g and n with 802.11n being the newest IEEE standard which defines data transmission at speeds of up to 140 megabits per second.  This is to accommodate the newer applications such as VoIP and video that require faster data transmission rates in order to function efficiently.

802.11g is still being used and has data transmission rates of 54 megabits per second (Mbps). This is not as fast as 802.11n but still is able to handle some of the more recent applications.  The predecessors of these two standards are 802.11a and 802.11b which are not as fast in terms of data transmission since they are earlier standards that were established prior to modern applications such as VoIP and video.

If you are setting up a WiFi connection in your home or for your business the setup requires common components that make up the infrastructure for the wireless network.  If you have more than one computer in your home or business then the main component you will need is a wireless router to convert the signals for data transmission.  If you are trying to establish a public access point in your business then you will be simply setting up the configuration to allow other wireless-enabled devices used by your patrons to connect to the Internet.  That said here are the basic components you need to setup a wireless network.

If you are establishing a public or municipal WiFi connection then you will simply use one hub that connects to the Internet and supplies the connection for multiple users.  The hub or wireless access point is made available to users with WiFi enabled mobile devices that automatically find the connection once you have set it up.  You supply the connection while the end user worries about making their device wireless-enabled. 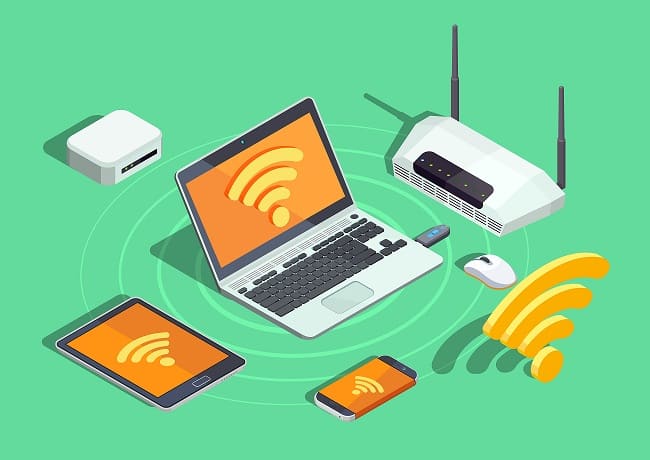