Dip Before the Plunge

The stuff of science fiction in the mid-20th century, Virtual Reality (VR) simulates or replicates physical, three-dimensional occupancy in a computer-generated milieu. This environment can be either imaginary or based on real events or places. All of the user’s senses – sight, hearing, smell, taste and touch – “perceive the digital environment” of the computer technology to achieve the full sensation of total immersion. Common applications include gaming, military and medical uses.

Note that artificial reality (AR) and virtual reality are two different concepts. AR, according to wareable.com’s Sophie Charara, “overlays graphics onto your view of the real world” whereas VR strives to create a “life size, 3D virtual environment without the boundaries… usually (associated) with TV or computer screens.” VR technology has evolved from the primitive behemoth ‘The Sword of Damocles,’ created in 1968 as the first head-mounted display (HMD) system, to the recent ballyhooed virtual reality headset (VRH) Oculus Rift. 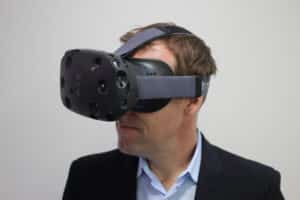 A few key concepts should be mentioned when discussing VR. They include:

Latency – the time lapse between VRH head movement and the corrected view of the display. This interval can cause motion sickness in some users.

Field of View (FOV) – the scope of the perceivable world observed at any given time.

Head Tracking – the repositioning of the image in front of the user as she looks down, up, sideways, etc. VRH components such as gyrosensors, laser positions and accelerometer – collectively called a 6DoF, short for 6 Degrees of Freedom– create three axes (plural of axis) to accurately track head movements like roll (shoulder to shoulder), pitch (forwards and backwards) and yaw (side to side).

Hand Tracking – Per John Marco of virtualrealitytimes.com: “Hand tracking, in general, is a complex and abstract aspect of artificial intelligence that makes use of numerous algorithms and the principles of mathematics and physical sciences to bring real-time interpretation of hand movements, gathered as data and processed into tangible user input.”

Persistence – a subjective measure of motion blur. In reality, humans move their heads while keeping their eyes fixed at one point. In VR, there is a perceptible latency between focus and blur when the user moves his head yet, for example, keeps his eyes glued to the dials in the cockpit of a jet airplane. Toleration levels of persistence and latency, measured in milliseconds, vary between individuals. Users sensitive to persistence and latency may feel motion sickness. The Simple Law of Persistence, as postulated by Blur Busters is: “1 ms of persistence = 1 pixel of motion blur during 1000 pixel/second motion.”

Presence – shortened from “telepresence,” Wikipedia defines it as “a phenomenon enabling people to interact with and feel connected to the world outside their physical bodies via technology.” Valve Software’s R&D team names the following prerequisites to establish presence:

Below is Top 5 Best VR Headsets 2016, a YouTube video from Austria’s TechMagnet. Note that the VRHs in this video all use Smartphone apps and thus are different from PC-based systems like Oculus Rift or HTC Vive.

Prolonged exposure to VR has caused unwanted side effects. Motion sickness, as noted above, is a malady commonly cited by users. Reportedly, social diseases such as conjunctivitis can be contracted from a VRH worn by an infected user. Some observers raise worries about virtual reality addiction, a condition akin to video game addiction. As a rule most VR systems caution consumers against protracted use.

But there are more cogitative worries. A number of writers have posited philosophical doubts regarding the social impact of VR technology. For example, Mychilo Cline – author of Power, Madness and Immortality: The Future of Virtual Reality – contends that as VR becomes more a part of everyday life, it will cause many significant changes in human behavior and activity. Will users attempt to reach Nirvana via VR? More importantly, will there be a steady “migration to virtual space,” affecting the culture, commerce and perspective of society? Such questions are likely to make critics wonder if VR has the potential to transform the world as did, for instance, the Industrial Revolution or the automobile. If so, what would the inevitable residual repercussions be?

For those interested in plunging headlong, so to speak, into the immersive world of VR, below are “the plungers” or the major players. The best VRHs according to wareable are:

There are “starter” VRHs at a nominal cost; perhaps the best known is the Google Cardboard, which currently sells for US$15.

As Kyle Orland of arstechnica.com posits, “Virtual reality (has) been a pipe dream concept, well ahead of the technology needed to realize it.” It’s certainly not the holodeck from Star Trek: The Next Generation. Although within reach, a truly realistic and totally immersive VR experience is still well into the future.