Last time, this space discussed T1s. Today we discuss T3, T1’s bigger brother. Both are examples of T-Carrier technology, developed by Bell Labs in the middle of the 20th century. Looking for a way to more efficiently and economically transport voice traffic between central offices both near and far, Bell engineers developed pulse code modulation (PCM), a technique that digitally represents and analyzes analog signals. Linear PCM is used for compact disc since a sizable bandwidth is needed to fully represent the true high fidelity of music. But for low bandwidth needs like voice signals, a compressed form of PCM works just fine. And like T1s, T3s use time-division multiplexing (TDM) to transmit voice/data over the separate and various channels that compose the circuit.

Instead of regurgitating much of what has already appeared here regarding T1s — the basic building block of the T-Carrier system — we’ll merely mention that the T3 has the bandwidth of 28 T1s and is the equivalent of the DS3. Both the T3 and the DS3 consist of 672 (= 28 x 24) separate channels, both have a bandwidth of 44.736 Mbps and of course both are a digital signal. To cut it fine, “T3” stands for “Trunk, level 3” and “DS3” denotes “Digital Signal, level 3.” John E. Shepler of Telexplainer elaborates, “DS3 refers to the digital signal service which could be provided on a T3 coaxial cable or a fiber optic cable. T3 is part of the T-carrier system and refers to the physical line, which is copper wire. You can get DS3 without the specific T3 wires, but not the other way around.” Note that these speeds are uni-directional. Since T-Carrier technology is full-duplex, the synchronous T3 actually consists of 89.472 Mbps when counting aggregate bidirectional data flow.

Note a DS3 signal can be transmitted across a variety of physical medias, typically coaxial copper cable but also wireless microwave and fiber optic lines. Thus should the reader think the DS3 is the same as the Optical Carrier, level 3 (OC3), let us hasten to provide correction. The baseline element of the Synchronous Optical Network (SONET) is the OC1, which has a bandwidth of 51.48 Mbps and is the closest equivalent to the T3/DS3, except OC1 is even faster. An OC3 has a bandwidth of 155.52 Mbps and can support 3 T3s/DS3s. To assist the reader in keeping score, we offer the following table:

One more difference between T-Carrier/Digital Signal and Optical Carrier systems: the former is fittingly described with the dinosaur-sounding term “Plesiochronous Digital Hierarchy” (PDH) whilst the latter is called “Synchronous Digital Hierarchy” (SDH). The difference? SDH carrier systems are exactly synchronized, timed perfectly from a nuclear Stratum-1 master clock. PDH carrier systems are close but not quite synchronized. Ergo, each end of the data stream runs at the same rate but are ruled by separate clocks. This inefficiency means that the data is not perfectly timed and so the faster side of the stream must insert “stuffing” bits, meaningless info that is removed at the receiving end, to sync the two systems together.

Let’s go back to school and review the fundamentals of telephony in this video course from Teracom Training Institute:

T3s — So 20th Century and So Expensive

Seriously, if you know someone considering T3 service for their business — and there’s really no plausible reason for an individual to consider one for the home — may we suggest you escort them into the 21st century or find them an IT consultant who’s heard of fiber optics, wireless broadband WiMAX or DOCSIS. The simple truth is that T-Carrier technology is obsolete and wildly overpriced when sourced from a telco like AT&T or Verizon.

So you want a T3 for broadband Internet? Remember it offers a bandwidth of less than 45 Mbps. Your intrepid author would be delighted to have 45 meg available at his home but his LAN consists of only four devices averaging less than 50 GB per month. Let’s say Santa brought you and your dearly beloveds two 4K UHD TVs for Christmas and the family streams videos from Netflix. Depending upon the device’s video codec, one UHD TV could burn through 7 GB per hour. (That’s presuming your device uses the latest h.265 video codec; UHD TVs with older formats could devour as much as 18.8 GB per hour.) What about the PlayStation or the Xbox Junior found under the Christmas tree? These three devices alone could easily amass as much as 20 GB per hour if they’re all being used simultaneously. So, 45 Mbps would plainly be inadequate as outlined for the scenario above. Click on this handy online tool to estimate how much bandwidth you need for your home’s usage.

Even if the 45 Mbps available from a T3 was sufficient bandwidth for your applications, the challenge then becomes how to pay for it. Upfront hardware costs are daunting when compared to a DOCSIS 3.0 cable box. The distance of the local loop between the telco central office or fiber provider’s headend and the customer’s premise typically plays a huge role in determining a T3’s monthly cost — the greater the distance, the higher the cost. Then factor in the Internet port cost, which increases along with bandwidth. As the itquotes.com blog reported in 2012, “pricing in rural areas can be anywhere between $3,000-$5000+ a month. In small-mid sized markets costs are usually $1500-3000, and large metro areas can be as low as $1000-2000 per month.” And you thought your cable bill was high….

Is there a legitimate reason to use T3s nowadays? Yes, if your business requires an ironclad Service Level Agreement (SLA), a contract between provider and customer guaranteeing predetermined service performance benchmarks. Should a certain, consistent bandwidth be required continuously, the T3 may be the best option. It can confidently be stated that a T3 circuit provided by a telco will almost always be “on.” Should you still have a landline at your home, can you remember the last time it didn’t work? The reliability of a T3 from a telco is unsurpassed but you’ll no doubt pay dearly for the service. 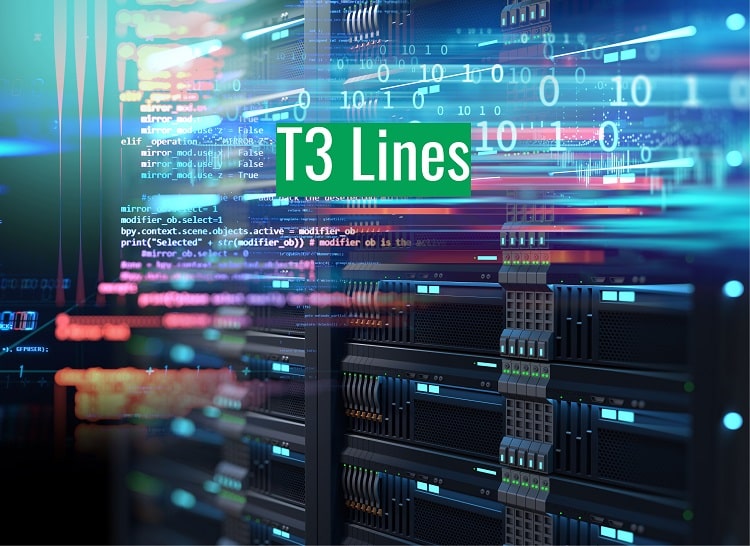