Old tip-and-ring geezers like your venerable correspondent are intimately familiar with T1s whereas younger whippersnappers raised on cable VoIP are likely not. Back in the 1980s, T-Carrier technology was the bomb — SMEs and large corporations alike requiring a bevy of voice and data channels relied on T1s and T3s. Copper wire prevailed in this era as yours truly plied his trade on CPE with a punch down tool, connecting blue-white, orange-white, etc., all the way to slate-violet  color-coded twisted wire pairs to 66 blocks and 110 blocks. Later in my career I used an electrical wire wrap gun to connect twisted pairs to central office main distribution frame (“mainframe“) termination blocks. 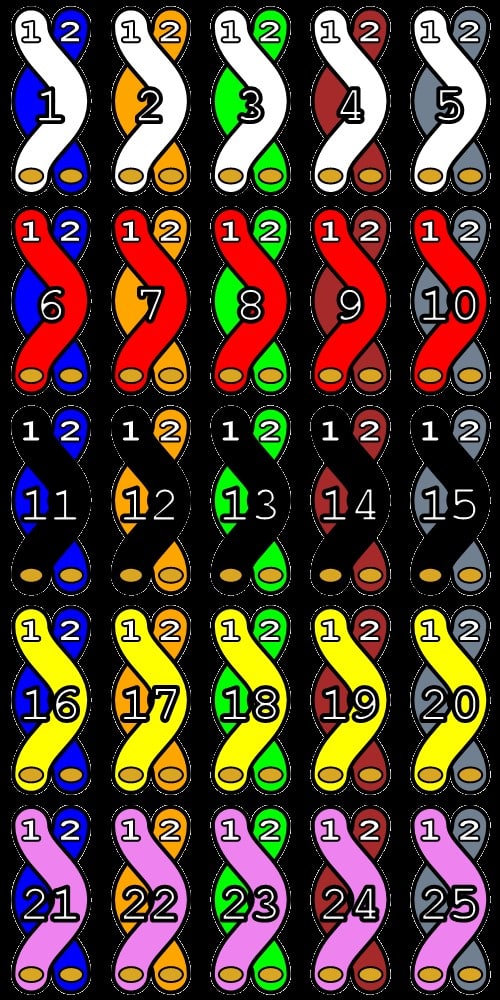 The term “T1” is actually somewhat of a misnomer since it refers to the circuit’s overall synchronous time-division multiplexed (TDM) transmission/receive rate of 1.544 Mbps — hence, T1.5 would be a more accurate term to describe the circuit. The T1 is a full duplex digital signal composed of 24 separate voice and/or data channels (telcos use the term “trunk,” hence “T1”) multiplexed into one circuit. Referring to the chart above, an analog breakdown of a T1 into separate channels would use all of the pairs shown except for pair 25 (violet-slate), which would be left in reserve as a spare pair. A copper wire T1 requires two pairs of cable, i.e., two transmits and two receives, to achieve its 1.544 Mbps bandwidth.

Of course, with today’s advanced digital telephony, computer software can now divide the 24 channels of a T1 within a channel bank or router, terminating with modular connection cables to a “registered jack” (RJ). The old-school method of termination involved a tech manually separating individual channels by punching down twisted pairs on a 66 or 110 block. T1s can also be delivered over fiber optic cable but given the bandwidth available, why would anyone settle for only 1.544 Mbps from fiber?

Note in this article, “circuit” denotes the aggregation of individual “channels” viz, a T1 circuit is composed of 24 voice/data channels. In a digital ecosystem, the individual channel of a T1 is known as “Digital Signal Zero” (DS0), referring to its bandwidth of between 0 and 64 Kbps. Thus a DS1 is the equivalent of a T1. After “muxing” 24 DSO channels into a digital signal using pulse code modulation (PCM), the data calculation for a DS1 circuit is

Note that only 1.536 Mbps is actually used for payload since 8 Kbps is reserved for framing or synchronization of the DS1 signal.

Watch whippersnapper Dave Andrews from eHow Tech give a geezer presentation of T1 in this YouTube vid:

One reason why T1s were (and are) popular is their intrinsic flexibility — which when compared to today’s newfangled technology seems somewhat constrained. The 24 channels of a T1 can be configured in a myriad of different ways. End users can mix and match channels for both incoming and outgoing calls or set aside parts of the circuit for data transmission. With an integrated Internet T1, a specified number of channels can be dedicated for Internet bandwidth and the remainder for voice calls. T1s can also be “bonded,” meaning two are joined together to increase bandwidth to 3 Mbps. Since bonded T1s must connect to the same CPE router, they must originate from the same ISP.

Another plus for T1s is reliability. It’s common to have T1 Service Level Agreements (SLAs) between provider and customer, contracts which guarantee certain benchmarks of service and performance. SLAs are virtually nonexistent with alternate services such as DSL or cable. And T1s can be provisioned virtually any place where Plain Ol’ Telephone Service (POTS) is present.

One huge difference between DSL and T1s is the fact that DSL service is shared among subscribers whereas a T1 is a dedicated circuit solely for use by one customer. Therefore, the 1.544 Mbps speed is guaranteed whereas the speed of a DSL or a cable connection varies upon how many subscribers are using the connection at any given time. Therein lies the reason why SLAs are available for T1s and not for DSL and cable broadband.

What About Speed and Cost?

As Hamlet might say, “Aye, there’s the rub.” T1s are mid-20th century technology, considered by tech millennials (not to mention many of us geezers) to be obsolete. And who can beg to differ when cable DOCSIS speeds of 25, 50 or 100 Mbps are available at a fraction of the cost?

Telecom services like T1s from telcos such as AT&T and Verizon are ruled by tariffs filed with a state’s Public Services Commission (PSC) or Public Utilities Commission (PUC). Thus there’s very little flexibility available to customers in terms of price and service options. Telcos like to say “their hands are tied” when it comes to service offerings as set out in their tariffs, and their rates are “set in stone,” ruled by the language of the tariff. T1s are subject to upfront construction costs if the wire or loop extension isn’t already in place as well as a monthly loop charge (in many cases mileage dependent; i.e., the longer the loop, the higher the monthly cost), an access charge and no doubt other applicable fees as specified in a telco’s T1 tariff.  The bottom line? According to howstuffworks.com, “A T1 line might cost between $1,000 and $1,500 per month depending on who provides it and where it goes.” Thus T1s are generally limited to applications such as a business office needing numerous phone extensions for their employees.

Voice over Internet Protocol (VoIP) has now superseded many of the traditional products offered by telcos, including T1s. Why? VoIP is considerably less expensive (both in cost per call and hardware), scalable (e.g., no need to bond T1s for LAN growth) and offers true number “portability.” An IP phone keeps its same telephone number no matter where it plugs into — your office, your home, your car or in a location a continent away. Moreover, all a company’s communication needs can be consolidated into one network accessing the Internet rather than requiring connection to the telco network. VoIP is why AT&T and Verizon fought tooth and nail against broadband telephony and why, as Network World reported in 2014, AT&T’s “goal is to replace its legacy PSTN network with a fully VoIP infrastructure by 2020.”