If you’re reading this, we’re assuming you’re having the same problem. As a result, in this article, we will provide you with some tried-and-true solutions to this problem.

When your satellite goes offline, it means there is a problem with the power supply. Do not plug your device into burned sockets. If you’ve connected the satellite to a power extension, plug it into a direct socket. Furthermore, you can rule out the possibility of a fluctuating or faulty power supply by plugging the device into another socket. Make sure the socket is within range of the router; otherwise, you will not be able to establish a strong signal.

Rebooting the satellite is an effective way to resolve any technical issues the device may be experiencing. However, restarting the entire system would be more effective. Such problems are frequently caused by overworked or overheated devices. Therefore, turn off the modem and unplug it from the power source. Turn off your Orbi router and unplug it from the power adapter. Turn off your satellite and wait 1 minute for the devices to cool down. Then connect and power on the modem, then the router, and finally the satellite. Following this procedure will result in a successful reboot of your system.

As simple as it may appear, configuration issues are a significant barrier to successful performance. If your satellite connection is only partially configured, you may experience these abrupt offline issues with the satellite. As a result, go to Orbilogin.com and look for any configuration flaws. Consider using a manual to configure your device, or if you are unsure of the configuration of the Orbi satellite, you can reset it to factory defaults.

Since a DNS server is in charge of IP addresses, problems in this area can have a ripple effect throughout your network. Your Orbi satellite’s current DNS server may have corrupted data, causing the satellite to go offline. Changing DNS servers may help you resolve the problem.

Orbi satellite can also support extender mode, which could be the cause of it going offline. Because your satellite will be inaccessible from the app if it is in extender mode, you must switch to Orbi mode.

First, unplug the satellite from the power supply. Then, on the device, locate and press the sync button. Hold the button down while connecting the power cable. Release the button as soon as you see a blinking white and blue light on the satellite. 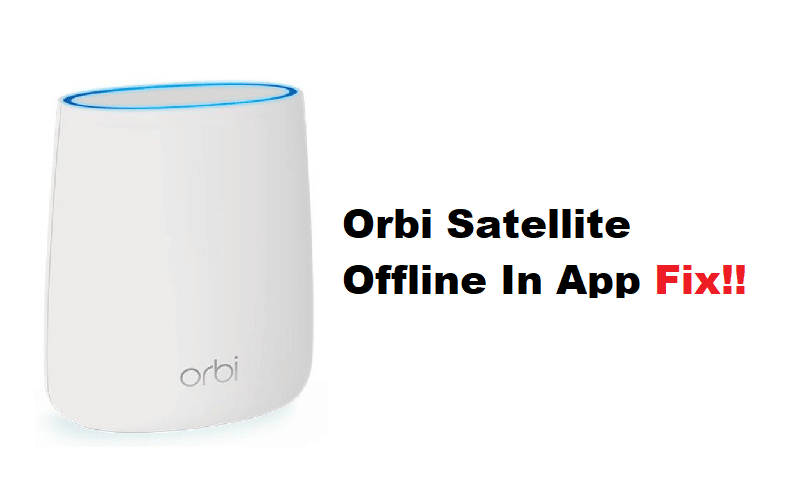