An emerging brand from upstart San Jose-based Ubiquiti Networks,  Amplifi (pronounced “amp-lye-fye“) currently offers three top-shelf Wi-Fi router/extenders for home and office use. Amplifi™ is known as a Wi-Fi “mesh” system where a router and bridge extenders (“mesh points”) stretch coverage to every remote corner of one’s home or office. This market, dominated by companies such as Luma and Eero, features a class of Wi-Fi routers that include individual extender modules for installation at strategic points to ensure blanket coverage.


One commonality found in this latest generation of Wi-Fi routers — they don’t resemble drones from an alien spacecraft. These products actually have a sense of style. Gone are the rabbit ear antennas and “sore thumb” aesthetics. Today’s modern Wi-Fi routers are designed to be compact and inobtrusive. The Amplifi bridge extenders (measuring 1.81 in/46 mm x 7.7 in/195.7mm x 1.63 in/27 mm) plug into a standard electrical outlet extending less than two inches from the wall. At a casual glance the base unit (which incorporates a touch screen and measures a mere 3.91 in/99.5 mm x 3.85in/97.8 mm/ x 3.91 in/99.6mm) could be mistaken for a clock on a shelf or atop a cabinet or kitchen counter. The Wi-Fi antennas don’t look like they came from grandma’s black-and-white TV set —  they’re seamlessly integrated into the product’s design.

Below is a YouTube video review of the Amplifi base model:

Ubiquiti sells three routers/extenders: in ascending order of price, they are Amplifi, Amplifi LR and Amplifi HD. Before looking closer at each individual product, let’s examine their common denominators. All three models support the latest IEEE 802.11ac standard. The base unit of all three have 3x dual-band antennas. Each has similar RAM capacity, CPU processors and Ethernet interfaces. Their greatest divergences are in area of coverage and, of course, price.

While the system can be accessed by using an IP address, this mode allows only for basic functions. A mobile app, available for both Android and iPhone platforms, must be used for complete functionality. A wireless Bluetooth connection links the computing device with the router. Setup appears to be easy and painless. Also, as the video above shows, the bridge extender unit is protected by a magnetic connection between the bridge and the power connector. Should anything — pet, vacuum cleaner, rug rat, etc. — “break” the connection between the two components, merely set the bridge back atop the power connector. The two components will be held together by magnetic force. The extender’s freedom of movement (see illustration below) means it can also be tilted at an angle for better beamforming transmission to the user’s device.

Base Amplifi model provides a maximum coverage of 10,000 square feet (930 m²). As may be expected, the maximum transmission power of this model is a smidge below its more powerful brethren (24 dBm compared to 26 dBm).

The mid-level model — the LR — shares features common to both of its stablemates, depending on capability. For example, it has the longer maximum coverage of the HD (20,000 square feet or 1858 m²). Yet like the base Amplifi, the LR extenders only have 4x2x2 radios whereas the HD mesh units have 6x3x3. (An aside: the first number signifies the number of transmit antennas, the second the number of receive antennas and the third the number of data streams.)

This is the most powerful model available. By consulting the table below, the reader will see that in addition to specs mentioned above, the HD base unit has 18 MIMO chains whereas the lesser models have only 10. (Another aside: “MIMO” stands for Multiple Input, Multiple Output antennas. A radio  chain or transceiver has its own antenna and “refers to the hardware necessary for transmit/ receive signal processing.”

Lewis Hilsenteger of ‘Unbox Therapy’ gives his take on the Amplifi HD in this YouTube video:

If industry buzz and consumer reviews about the Amplifi are to be believed, this may be the best Wi-Fi mesh system currently available on the market. But despite the apparent worth of the product, caveats common to all Wi-Fi routers, extenders, access points, etc. remain, namely barriers of space and distance. The interstellar speed of 802.11ac (ideally 1.3 Gbps) is just that — a measurement based in a laboratory. Walls (particularly masonry and metal) drastically impact transmission speeds, as does distance. While these products may claim a range of 10,000-20,000 feet, they give no guarantee (or even indication) of the speeds the user may expect. Chokepoints abound on a WLAN. Remember — a network is only as fast as its slowest element. This is why users wonder why they don’t get the speeds advertised when they shell out the big bucks (and these Amplifis are pricey) for gear. 802.11ac gig speeds are truly amazing but it’s a waste of money when they’re used on devices with obsolete hardware, e.g., a laptop with a 802.11g/n Wi-Fi card or a 3G SmartPhone.

Note that while Amazon sells dozens of Ubiquiti Network products (including the older airGateway™ router with 802.11 b/g/n), as of 23 September 2016 none of the Amplifi models were available.

And as a point of further clarification, also note that the Amplifi Wi-Fi mesh system is not to be confused with the media investment arm of global conglomerate Dentsu Aegis or the Bluetooth-enabled Line6 family of guitar amplifiers. 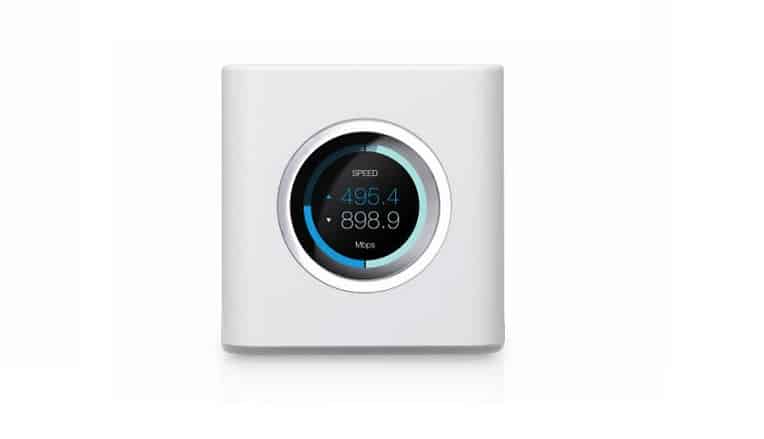