Perhaps you’re lucky enough to live in a spacious multi-story home with multiple rooms on every floor. If so, you’ve likely had the headache of wireless connectivity problems in various portions of the house. These “dead spots” generally seem to be in the most inconvenient locations, like just where you want to place the Amazon Echo so you get the right sound coverage for a room. Or in the boudoir where the missus’ Android or iPhone receives no bars. Luckily, you can remedy this problem by extending the range of your home wireless network.

As we discussed last year in our look at home Wi-Fi mesh networking, there are a number of ways to extend a wireless network. Although similar in application, they differ by how they work.

Wi-Fi Mesh Networking: a network consisting of gateways, routers and clients (e.g., Smartphones, tablets, Bluetooth speakers) that all work in unison to deliver all data to all the network components. Originally designed for military use, they are reliable, secure and relatively inexpensive. Techniques such as shortest-path bridging (SPB or the IEEE 802.1aq standard) efficiently route data through the network.

Wireless Repeaters (or Boosters): extends the range of network coverage by amplifying the existing Wi-Fi signal and transmitting it to another router. Often powerline Ethernet adapters are used to take advantage of a building’s electrical wiring for communication between routers.

Wireless Bridges: per techopedia, a wireless bridge is a “type of networking hardware device that enables the connection of two different (emphasis added) local area network (LAN) segments by bridging a wireless connection between them. It works much like a wired network bridge and is used to connect LANs that are logically separated and/or located in different physical locations.” Typically used for corporate LAN applications, for connectivity a wireless bridge needs to be installed at both ends of the LAN. Both point-to-point or star network topologies can be bridged. Homes can take advantage of wireless bridging too; for example, a wireless access point can serve as a hardwired Ethernet bridge to devices such as HD TVs or gaming consoles.

Wireless Distribution System (WDS): a feature enabling single-radio access points (APs) for wireless connectivity instead of using a wired Ethernet connection. Connectivity can be either by wireless bridging where the WDS APs link to only each other or by wireless repeating where APs are linked together as well as to wireless clients (e.g., Smartphones, tablets, etc.) Each segment “hop” reduces throughput by approximately half since the same channel is used and must be retransmitted to link with the wired LAN. 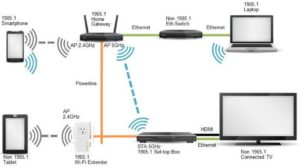 What to Look for in Network Extenders

To fully avail of the wireless speeds now available, you’ll need a router that supports the latest generation IEEE 802.11ac standard. But make sure to get a dual-band router with Ethernet ports that support hardwired devices (e.g., Smart TVs, Xbox or PlayStation) to take advantage of the router’s faster connection speed and reduced latency.

You’ll also want a dual-band Wi-Fi repeater. Why? A single-band repeater receives a wireless signal, then rebroadcasts its data packet on the same channel or radio frequency, thereby using 50% of the bandwidth for retransmission. Some Wi-Fi dual-band repeaters transmit a radio signal on one frequency (i.e., 2.5 GHz) and then rebroadcasts on the 5 GHz spectrum. Thus you’ll achieve a greater benefit of the home’s Internet connection speed. Look for a fast processor, say a dual-core 1.3 GHz processor, to facilitate maximum wireless throughput.

If one decides to go with a powerline Ethernet adapter, remember the condition of home’s electrical wiring and distance between adapters are variables to account for when gauging network performance. Ideally, by substituting copper for  Wi-Fi, the user will typically receive faster speeds than one would normally realize if using a totally wireless LAN. This consideration is important for gaming and UHD TVs, applications which demand high connectivity speeds and ultra-low latencies.

Too, seek out routers with the latest and greatest beamforming technology—it allows the router to concentrate and direct the signal to the receiving wireless device. This selected targeting greatly ramps up signal strength, connectivity speed and performance and lessens any nearby signal interference. Beamforming uses Multiple Input-Multiple Output (MIMO) antennas to provide multiple transmit and receive paths that greatly increase connection speeds.

From the ‘Know Your PC’ YouTube video series, here’s an instructive primer on how to extend your home wireless network range with a Netgear model WNR3500 repeater:

When One Plus One Doesn’t Equal Two

Should you decide to try to extend your wireless network by linking two routers together in the same network, be aware of a tech issue known as “Double NATting.” Here, NAT is an acronym for Network Address Translation and it enables multiple devices to share a single IP address—else IP addresses would have been exhausted long before now—and it mitigates LAN exposure to the Internet. Double NATting can cause problems when trying to remotely access devices on a LAN.

How does NAT work? Your ISP/MSP issues you a public IP address, which the router on your LAN saves. The Wide Area Network (WAN) port gets the public IP address while the other devices on the LAN ports (or via Wi-Fi) comprise the private LAN that typically have 192.168.x.x addresses. NAT is the overseer between the WAN (i.e., Internet) and the user’s private domain. Incoming connections from the Internet are handled by either Universal Plug and Play (UPnP) or manual port forwarding so that the NAT sends incoming requests to the appropriate device in the LAN.

To see if your LAN has double NAT, log in to the router and check the WAN port’s IP address. If you find a 10.x.x.x or 192.168.x.x address—these are private IP addresses—this means that your router is linked to a gateway performing NAT and ergo, double NAT. To remedy this situation, see this.

So should one go with Wi-Fi mesh networking or choose wireless repeaters? Remember this: 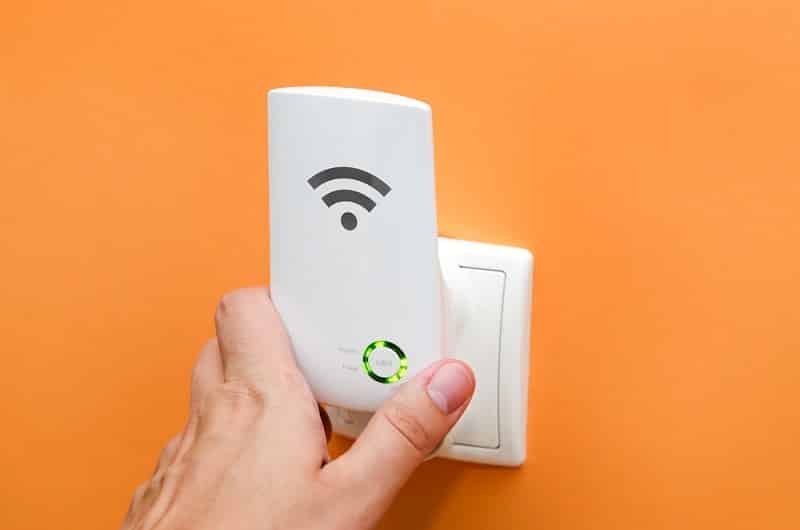