FTTX — it’s not some quadratic algebraic equation. Per Margaret Rouse of whatis.com, Fiber to the X (FTTX) “is a collective term for various optical fiber delivery topologies that are categorized according to where the fiber terminates.” What is the X factor? “X” could be the home, the node, the curb/cabinet or the building, viz, FTTH, FTTN, FTTC or FTTB. These are all fiber services where “X” indicates the termination location of the fiber.

Except for FTTH, all of these delivery models are examples of hybrid fiber coaxial (HFC) networks, where fiber is used across virtually all of the service loop and coax competes the “last mile” (LM) to be terminated at the subscriber’s premises. These HFC FTTX models are acknowledgments of market realities. As the number of subscribers shrink, the cost of constructing fiber networks exponentially grows. HFCs keep fiber network construction costs manageable while still maintaining the incredible speed and bandwidth fiber optics offer. The analogy of the human body’s blood circulatory system — arteries, veins, capillaries — is often cited as a comparison to data network distribution. 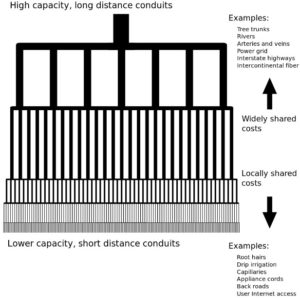 As we noted in this space previously, FTTXs are either passive optical networks (PONs) or active optical networks (AONs). In addition, PONs are subdivided into Broadcast PONs (BPONs), Gigabit PONs (GPONs) and Ethernet PONs (EPONs). Each topology varies in coverage, standard, protocol and number of times the PON can be split to subscribers.

Sure, most everyone knows that fiber networks are capable of delivering the fastest connection speeds available, surpassing copper and wireless mediums. The Gig speeds fiber offers means that highly sought services like IPTV and video-on-demand streamed to the latest UHD TVs can be provided along with more traditional offerings such as high-speed data access and voice services — simultaneously — with no latency or competition for bandwidth between devices.

You might not need need speeds of 715 Mbps down and 385 Mbps up but others have specialized uses for this type of broadband. For example, Jerry Tubb — President and Chief Engineer of world-renowned Terra Nova Mastering Studios in Austin — has Google Fiber to his home. Musicians send him uncompressed .WAV and .AIFF music files they’ve recorded in sound studios for him to master. Jerry gets the connection speeds cited above, which means he can download a zipped set of 10 high-resolution 24-bit 96 kHz files or  “mixes” (totaling 1.4 GB) in two minutes and 4 seconds. He reports that the same set of files takes approximately 15 minutes to upload, a delay he attributes to the limitations of the cloud storage server he uses. When considering that these digital music files have over twice the sample rate of a compact disc sold commercially (44.1 kHz) and a 50 minute CD contains ~500 MB of data, one grasps just how fast Jerry’s fiber service is. In other words, he can download the data on a typical 50-minute music CD in under 6 seconds. As Jerry says, “Well worth the investment in bandwidth for a professional.”

On the other hand one of Jerry’s clients, the celebrated musician Merel Bregante (Loggins & Messina, The Nitty Gritty Dirt Band, Chris Hillman, Dan Fogelberg, et al) is owner/engineer of the Austin-area sound recording studio Cribworks. Recording artists and music producers from across the globe send him music files to be mixed. While the recording gear at Cribworks is top-notch, the somewhat isolated location of the studio in the scenic Texas hill country limits Merel’s ISP options. Thus he relies on a satellite provider to send and receive his music files. And yes — the contrast in connectivity is pronounced. For a 4 minute file with 24-bit, 96 kHz resolution at 200 Mb, the transfer takes about 20 minutes. Thankfully the protracted interval of transfer does not affect the sonic quality of the music. But oftentimes Merel sends Jerry multiple files that literally take overnight to upload.

You, gentle reader, may not be a music professional sending and receiving massive files brimming with hundreds of megs of data. But should your home have two or three 4K UHD TVs with video streaming services, kids who live on their Xbox or PlayStation and an adult whose profession requires the download/upload of work files — with all these activities occurring simultaneously — fiber solves connectivity challenges with nary a hiccup.

Below is a simplified FTTX schematic demonstrating the architectural variance between optical fiber and the end user. Note that the building on the left denotes the central office or head end. The building on the right represents the building receiving service; dotted rectangles indicate separate offices or dwellings within the same building. 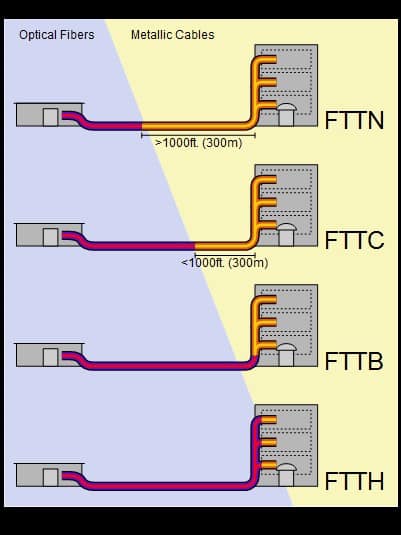 As mentioned previously, the various FTTX incarnations include the following categories. Notice that each successive category pushes fiber termination further from the home or office subscriber. Therefore the service is more likely to be shared with other users.

Fiber to the Home (FTTH)

This can be used to describe either a point-to-point dedicated network or a PON, with fiber terminating at the premises of the subscriber or end-user. Perhaps the best feature of FTTH, unlike other FTTX models, is that it’s “future-proof.” Unless your line of work is hosting computer servers, no doubt Lloyd’s of London would sell you an insurance policy guaranteeing that during your lifetime your home or business would never need to upgrade from the 1 Gig connectivity commonly available from FTTH. Moreover, for those looking to add value to their homes, in 2007 David St. John of the FTTH Council cited a study that found FTTH added “about $5,000 to the purchase price of an individual dwelling.” Invariably, FTTH provides the fastest speeds and most bandwidth of all the FTTX offerings.

Fiber to the Building (FTTB)

Often regarded as fiber service to multiple dwelling units or FTTM (MDUs = apartments, condos or high-rise residential buildings), this topology is also known as fiber to the premises (FTTP). Given cost considerations, this is probably the model most used for deployments of fiber service to companies co-located in one office building. In some buildings, shared tenant service providers utilize economies of scale to provide fiber to subscribers without the exorbitant costs individual users would incur. Although fiber is brought into the building, copper wiring is used to connect subscribers to the building’s “lockbox” — the junction where home run wiring begins distributing signal to individual units. The connection is shared among the building’s subscribers.

Fiber to the Curb (FTTC)

This is a literal description; fiber is brought to the curb outside the home or business. It’s almost the same as FTTN except closer. Verizon categorizes FTTC as less than 1,000 feet away from the home and providers can network multiple fiber distribution terminals (FDTs) to serve individual homes. From the curb onward the architecture utilizes copper to termination in the home or business. FTTC provides for intrinsic network flexibility, allowing for either point-to-point or ring topology. However, many of the same criticisms leveled at FTTN (see below) apply to FTTC. VDSL technology — which in most cases used for the LM — is quite distance-sensitive.

Fiber to the Node (FTTN)

FTTN (also known as Fiber to the Neighborhood) is essentially FTTC except fiber is terminated in a network “node” over 1,000 feet away from the subscriber. Copper is then used for the LM to the home or business.

The point has been made by observers that FTTN is a waste of resources. Jamie Benaud of the website NBN Myths (a reference to Australia’s National Broadband Network) states the case that capital investment in FTTN is essentially squandered. Why? The infrastructure built is a “stop gap” measure and nearly as expensive as FTTB but offers inferior speed-to-price ratios and wildly variant connectivity dependent on location and distance to the end-user. Since FTTN and FTTB topologies are for the most part incompatible, FTTN doesn’t serve as a pathway to FTTB upgrades. Most FTTN hardware would be scrapped since it would become redundant. (FTTB requires only a third of the number of street cabinets as FTTN; FTTB cabinets are also a quarter of the size of the ones used for FTTN.) Also, FTTN uses DSL/VDSL for the LM, so distance matters when considering the bandwidth available to subscribers. A thousand feet of distance from node to subscriber generally provides adequate bandwidth, depending upon cable gauge and condition, but longer distances hamper connectivity speeds and signal performance.

The exorbitant costs associated with FTTH and FTTB rollouts have severely curtailed their expansion in the U.S. Verizon execs have stated on numerous occasions that they aren’t interested in expanding their FiOS service beyond existing areas (Boston is an exception). Alphabet, Google Fiber’s corporate parent, has yanked the reins on fiber network expansion as well. Instead, Google is investigating fixed wireless options using the 3.5 GHz spectrum for the LM span in as many as 24 locations across the U.S.