You maybe have friends in Austin or Kansas City or Atlanta or Nashville or Charlotte who rave about their Google Fiber connection and the warp drive speeds they have for the Internet. Or perhaps you’re part of the 12% of the U.S. population who has access to Verizon or Frontier FiOS and their white-hot fiber speed. All of these companies use passive optical networks (PONs) as an affordable means to take fiber “the last mile” to the home or business, i.e., FTTH. In case the reader has an appetite for more acronyms (and there are plenty in this article), there are various forms of PONs such as

Speed and Specifications of BPON, GPON and EPON

An AON needs an externally powered switching mechanism like a router or an aggregator to manage signal distribution and direct data to its designated terminations. See the diagram below: 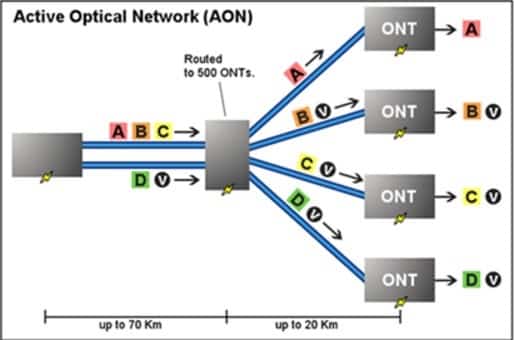 Conversely, a PON is a point to multipoint (P2MP) architecture consisting of just fiber cable and passive gear such as optical splitters (not amplifiers, regenerators, add/drop multiplexers, etc.). Powered equipment is needed only at the source and terminus of a signal. Thus a PON is a shared network from a central office optical line terminal (OLT) to an optical network terminal (ONT) or an optical network unit (ONU) at the customer’s home or business. Note that ONTs/ONUs can be located either indoors or outside the customer’s premises. See an example below: 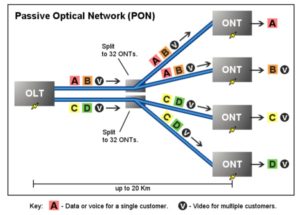 Each approach has its virtues as well as limitations. AONs are used over much longer distances (70 Km or 43.5 miles) compared to most PONs, which are limited to 20 Km (12.4 miles). The exception is GPON with a range of up to 60 Km (37.25 miles). Also, an AON can serve as many as 500 ONTs while the maximum PON splits are 64 (EPON architecture). The maximum PON splits for APON are 32; GPON can only muster 16.

An AON subscriber has a dedicated pipe to the premises and is not obliged to share the bandwidth with other customers. As a result, AON subscribers have faster connection speeds than PON customers. From a network standpoint, troubleshooting is much easier on an AON since the fiber is dedicated to a single subscriber.

On one hand a PON potentially costs less to maintain due to the lack of active gear such as power supplies needed to manage signal distribution. And the fact that many more subscribers can be served from a single fiber means greater network efficiency. Yet when network failures occur on a PON, troubleshooting is more costly (and difficulties increase as more subscribers are added) since additional network elements must be isolated for testing purposes.

The following video on PONs from IBM segues nicely into the section below:

Why PON Is a Smart Capital Investment

Since telephony was invented, communication plant and infrastructure have been based on copper. But for the 21st century, fiber optic-based technologies using glass instead of copper makes sense when it’s time to upgrade from legacy networks. There are several reasons why PONs are coming into widespread use and not just for FTTH.

1. PONs are inexpensive to install and maintain compared to other technologies. PONs are intrinsically simpler to build and maintain than both copper networks and AONs. True, troubleshooting PONs can be more involved than a P2P network, but overall a PON has less maintenance than AON. Also, fiber optic glass is cheaper than copper cabling and uses less space.

2. PONs use less network equipment and power than copper-based Ethernet LANs. There’s no need for multiple Ethernet switches, thereby reducing power and cooling costs. According to Motorola, “In a building with 3,200 networking endpoints … (PONs) result in a power savings of about 50%.”

3. PONs have greater security compared to copper-based networks. It’s simple to break into copper wiring at almost any point on a network but the use of bend-insensitive (BI) fiber optical cable prevents tapping by means of stress (i.e., bending). In any case, fiber optic cable taps can be easily detected by monitoring power output.

4. PONs have more comprehensive coverage than copper networks. PONs go farther without amplification with multiple terminals while still maintaining “broadband” speeds. In many cases copper cable can only span 100 meters without needing amplification. Fiber optic cabling extends greater distances without signal degradation. Too, category (“Cat”) 6/7 Ethernet cable is needed for 10 Gbps speeds; most existing Ethernet cabling is Cat 5 with a bottleneck of 1 Gbps.

5. PON installations need not disrupt existing telecom infrastructures and there are no interoperability issues where fiber optic and copper technologies converge.

Since we’ve discussed both PONs and AONs, it should be mentioned that there are also hybrid FTTH networks that combine features of both architectures. And in 2015, the Next Generation Passive Optical Networking 2 (NG-PON2) standard was unveiled, capable of 40 Gbps with 10 Gbps symmetric up and and down speeds for each subscriber. 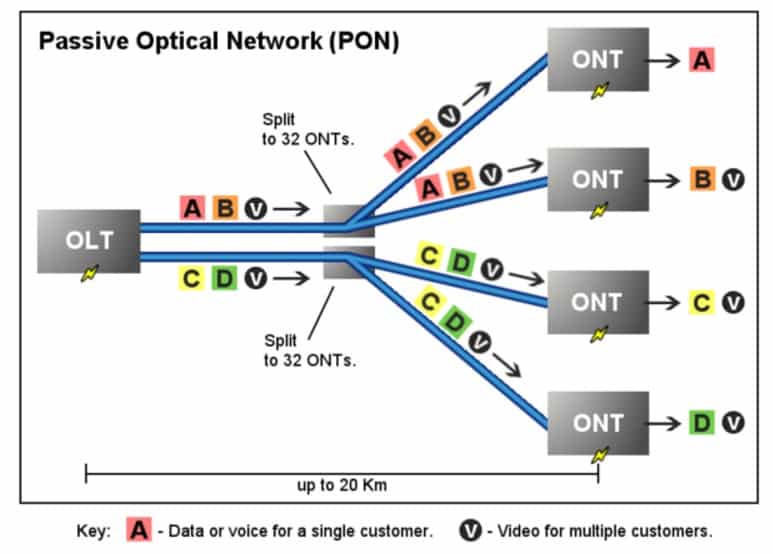