DSL stands for Digital Subscriber line that is a technology to transmit data through telephone lines. DSL gained popularity around the 1980s and 1990s. It became a large source to access the internet for personal users around the globe. But, this source of internet slowed down telephone communication.

To overcome the weakness, DSL filters were invented in 1999. The first concept regarding these low pass filters was described by Vic Charlton in 1996 while he was working for Canadian Operations Development Consortium.

A DSL filter is a filter used commonly for analog devices such as telephones fax machines, analog modems, and many other electronic devices.  A DSL filter is also referred to as a DSL splitter or micro-filter.

This device is used to eliminate disturbances, distractions, and interruptions in internet service. This minimization of disruptions enhances the internet connection thus making the speed faster as compared to using DSL without DSL splitter.

The sharing of the same route by DSL and analog device was one of the reasons for disruptions in the telephone network in the past times. Now, the DSL filter allows connectivity to various other electronic devices at the same time without affecting the speed.

Since the device is of passive nature, it requires no power to operate its function. Active transistors are present in high-quality DSL filters which make them superior from older devices.

There are various types of DSL filters depending on download and upload speed i.e. ADSL, SDSL, HDSL, and VDSL. ADSL is the most commonly used microfilter in its variants.

DSL filter has provided great ease and benefits to the world of IT. But unfortunately, various problems or issues may be faced by the users while using this analog filter. Here is the list of common issues and their solutions that are faced by microfilter users.

The Problems Regarding DSL Filters And Their Solutions

1. Expiry of the life span of DSL filters

Microfilters last about an average of about 3 to 6 months. After the expiration of this time frame, old filters need to be replaced with new ones. If you are having issues in the speed of the internet or DSL is disconnecting frequently, it means you are having a failed filter and it needs to be replaced.

To verify whether the filter is bad or not, this can be done:

2. Hearing of static noises on the telephone lines

There can be two main reasons for static noises on the telephone line. It can be an outcome of a faulty DSL filter. Other electronic devices may also be a reason for causing disturbances, resulting in static noise.

Disconnect all the electronic devices such as answering machines, modems, computers, fax machines, cable boxes, etc. Plug your telephone directly into the wall and notice whether you hear a dial tone. Now plug that to one of your devices and investigate for the dial tone.

Plug it in one by one to all the existing devices and look out for the dial tone. If you find out that none of your devices is causing the hindrance, there might be a fault in the wiring or there may be bad wall jacks. You can either repair the wiring yourself or consult your local repair service.

3. Dial tone in the telephone cannot be heard

Check the customer care pages to see if there are problems regarding services in your hometown. If there are no complaints regarding the issue, bad wiring may be a cause of this problem.

Despite all the issues and problems that may arise with the use of DSL filters, there are various other advantages that come along with it. The telephone line is not occupied by DSL filters. This allows users to utilize both services i.e. telecommunication and the internet.

It does not require any extra infrastructure, meaning you can still have your traditional internet infrastructure. It provides better speed and efficiency as compared to the old dial-up method. These benefits are the reason DSL filters are still used in the modern IT era. 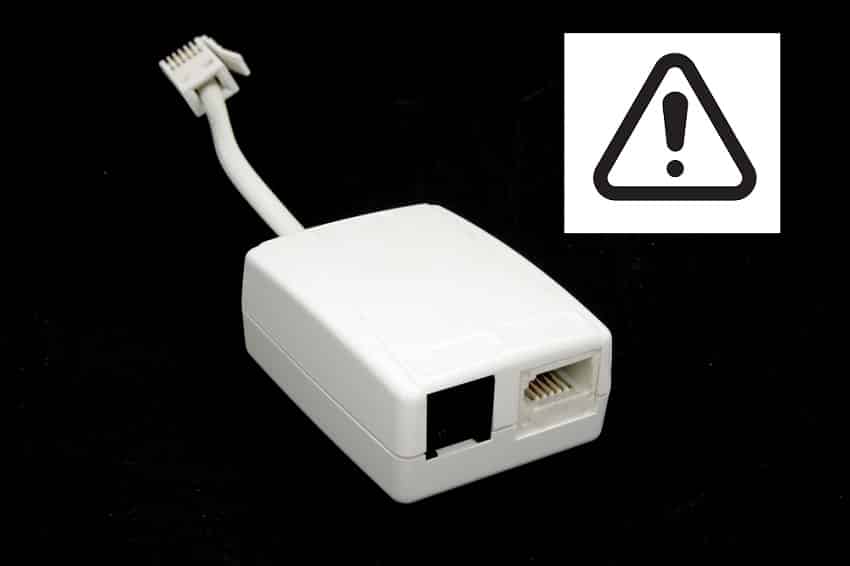