Satellite telephones, sat phones or satphones are extraterrestrial mobile phones linked to orbiting satellites rather than land-based cellular towers. While bandwidth is limited compared to the latest 4G SmartPhones, satphones essentially have the same capabilities as terrestrial mobile phones. Typically satphones systems support voice traffic, short messaging service (SMS) and Internet access. Unlike landlines or cellular service, satphone operation is more or less impervious to atmospheric events like tornadoes and hurricanes. Most models weigh, operate and look similar to today’s cell phones. Some come with Bluetooth and WiFi options, allowing use of a remote headset and wireless connection to a computing device for data access.

The International Telecommunication Satellite Consortium (Intelsat) built the first satellite network infrastructure in 1965, sparking a tidal change in world communications. In particular maritime communications have benefited from the new technology. Today satphones have all but replaced land-based aeronautical radio – used since the time of Marconi –  for maritime applications. Note that while all satphone companies provide essentially the same services, each uses widely divergent proprietary technologies. However, most satellite phone providers follow a version of the Geostationary Earth Orbit-Mobile Radio Interface or GEO-Mobile Radio Interface (GMR). a European Telecommunications Standard Institute (ETSI) standard for satellite phones.

Once exclusively the purview of governments, the construction and launch of satellites increasingly became commercialized by the 1990s due to increasing demand in the U.S. and worldwide. Private satellite operators including TRW, Iridium, PanAmSat, Globalstar and others in the early 1990s founded the Alliance for Competitive International Satellite Services (ACISS).This umbrella consortium was created to counter the monopoly positions of intergovernmental organizations (IGOs) such as Intelsat and the American Communication Satellite Corporation (Comsat), created by the Communications Satellite Act of 1962.

Satellite phones connect to either geosynchronous satellites (i.e., one in a geostationary orbit) or low earth orbit (LEO) satellites. Each system has its advantages and disadvantages as shown below.

This system places satellites in a geostatic orbit at 22,236 miles (35,788 km) above the earth, meaning it remains at a fixed position in the sky.  By utilizing this system. only three or four satellites are needed to provide near-comprehensive global coverage. Geosynchronous satellites weigh approximately 5.5 tons (5,000 Kg) and are costly to build and launch. On the other hand, having so few satellites for global coverage means reduced launch costs. They offer substantially more bandwidth than LEO systems. Proprietary portable laptop terminals connect with geosynchronous satellites at data speeds spanning 56 Kbps to 512 Kbps, roughly equivalent to the bandwidth of a DS0 to a third of the capacity of a conventional T1 channel. Geosynchronous satphones are considered to have more stable connections than LEO satphones.

Among the disadvantages of geosynchronous satellites include limitations in use of latitude. Coverage is generally limited to 70° north and south of the equator due to horizon angles that increase terrestrial interference and interference from other sources using the same frequency bands. Too, even in areas with vast open skies, line-of-sight between the satellite and the phone can be disrupted by terrestrial obstacles like thick forest and steep hills.

London-based Inmarsat, the grandaddy of satellite phone operators in business since 1979, started by servicing the maritime industry but has since expanded into hand-held phones through a joint venture with ACeS. Its eleven satellites cover most of the Earth except for polar latitudes. The now-privately owned company is a derivative from the original IGO International Maritime Satellite Organisation.

Check out the latest IsatPhone² on this brief YouTube video:

Thuraya, based in the UAE, serves Europe, the Middle East and Africa. The company features dual-mode handsets allowing subscribers to not only connect with the Thuraya satellite network but also roam on Global System for Mobile Communications (GSM) 2G standard networks.

Pendrell Corporation, previously known as ICO Global Communications, is based in Washington state and engages in a number of businesses in addition to offering satellite telephone service. It provides voice, video and data subscriptions in the continental U.S., Alaska, Hawaii, the U.S. Virgin Islands and Puerto Rico.

A number of companies providing geosynchronous satellite service have ceased operations in the past few years, notably Terrestar. Its wireless spectrum was acquired by Dish Network.

Introduced in 1997, LEO satellites circle the earth’s surface from a distance of 400 to 700 miles (640 – 1,120 kilometers), providing coverage cells with 1,740 miles (2,800 km) radius at a ~100 minute orbital period or window. Orbital time varies between 70 and 100 minutes. To ensure coverage, at least one satellite must be within line-of-sight of every coverage cell. A functional pass of an individual LEO satellite generally averages a duration of 4 to 15 minutes depending on the relation between satellite and terminal position. Hence, a firmament full of satellites are needed to provide coverage. Bandwidths are much less in comparison with geosynchronous satellites, delivering anywhere between 2,200 bits/second (2.2 kbps) and 9,600 bits/second (9.6 kbps). Note LEO systems can track mobile unit locations with Doppler effect calculations based on the satellite’s position in relation to the earth’s surface.

New Orleans-based Globalstar, which started operations at the end of 1999, maintains a 2nd generation constellation of 24 satellites with a projected service life of 15 years. The service is known for cellular-like audio quality.

The Iridium constellation of 66 active satellites with spares provides pole-to-pole coverage. Iridium satellites communicate with each other four via inter-satellite links; two to neighbors fore and aft in the same orbital plane and two on either side to neighboring plane satellites. However, audio quality suffers from the use of a narrow bandwidth. 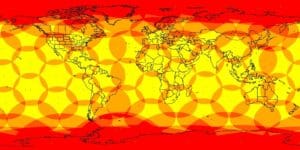 Figure was generated with SaVi, software written at the Geometry Center, University of Minnesota.

Conventional markets for satellite phones are government and public security agencies, maritime interests and energy and mining companies. Thanks to satphones, emailing, texting and calling from cruise ships has never been easier. Calls from commercial airline flights are routine. Thus satphones are now mainstream.

Satellite phones have long been favored as a tech tool by survivalists who keep them in reserve in order to communicate with the outside world should disaster strike. The cost of satphones has plummeted in recent years; thus they’re an affordable insurance policy in case all other networks fail. Depending upon phone, service plan and airtime, one could spend well below $100 per month. Activation is extra. Or one can choose to rent if a long commitment is not needed. This option is particularly attractive for those aboard a cruise ship who want to call home without paying the outrageous prices cruise lines typically charge.  For comparison’s sake, realize that satellite air time is generally the equivalent of cell phone roaming charges abroad.

From a security point of view, one should be aware that the encryption used in satphones is vulnerable. Security researchers have reverse-engineered both major proprietary algorithms currently in use. Hence satphones should be avoided if secure communications are essential.

Too, one should be aware that in certain authoritarian countries (India is an exception), possessing a satphone is illegal. Burma, China, Cuba and North Korea have zero tolerance; India allows only Inmarsat-based satellite services. Russia has a 6 month allowance for satphone use by non-Russian visitors if they register their SIM cards.

One detail that neophyte users often overlook is the satphone antenna. It’s external, meaning that for full functionality (or even basic operation) the antenna must be extended. Don’t expect to walk around thinking the satphone in your pocket will reliably receive calls like a cell phone. Another is the satphone number; you’ll need one to receive calls. Satphones usually have special international numbers although Globalstar, for example, also assigns North American Numbering Plan (NANP) numbers to their handsets. Some companies use Direct Inward Dial (DID).  This feature functions much like an extension from a PBX system, meaning that callers who wish to contact a satphone subscriber must call a NANP number (i.e., NPA-Nxx) and then “overdial” with DTMF (not pulse dial) the subscriber’s assigned phone number.

Which satphone should you use? That’s akin to asking what car one should buy –  it depends upon what the user needs. If reliability is a foremost concern, some pundits recommend Iridium. If one will be located in the far reaches of North America and will be using the service on a regular basis, many recommend Globalstar. Are Wi-Fi/Bluetooth capabilities needed? Do you need to send and receive data? Is a panic alarm an absolute must? What about GPS location transmission? The answer as usual depends upon need and application.