Satellite communications brings its own baggage: the bandwidth available from satellites is gradually becoming exhausted, the propagation delay or latency and the bit loss between the orbiting satellite and ground and the exorbitant expense of satellite launches — not that laying submarine cable is an insignificant cost. While fiber optic cable transmits data at 99.7% of the speed of light, a quarter of second latency occurs for radio signals to reach and return from a geostationary satellite. No big deal for non-interactive systems such as television broadcasts but latency greatly impacts two-way telephone conversations and basic Internet protocols such as TCP/IP.

Far more bandwidth capacity is available with fiber cable compared to satellites. One need only look to Antarctica, currently the only continent not served by submarine communications cable. With the intensification of global warming and the pursuit of other scientific analyses, prodigious research is continuously conducted at facilities all across the icy continent. But more data is generated in Antarctica than can be transmitted via satellite communications.

Submarine Cables Since the Telegraph

Construction of the first transatlantic submarine cable between Newfoundland and Ireland began in 1854 followed by first transmission in 1858. Meant for telegraph use, it was plagued by technical issues and remained in service for only a month before ceasing operation. The next transoceanic project proved far more successful. In 1865-66 the SS Great Eastern, the largest steamship in the world at the time, laid a transatlantic telegraph cable between Europe and North America. Telegraphs cost $10 per word with a 10 word minimum — or $1,436.44 per telegraph in 2016 dollars. Subsequent submarine cable projects laid by the SS Great Eastern connected France to its overseas collectivity of Miquelon near Newfoundland in 1869 and a route between Aden, Yemen and Bombay in 1870. When Java was connected to Darwin in Australia’s Northern Territory in 1871, all the world’s continents except Antarctica were connected by submarine cable.

Given the number of oceanic telegraph cables, surprisingly the first submarine telephony cables didn’t appear until the 1950s. Service on Transatlantic No. 1 (TAT-1) between Scotland and Newfoundland inaugurated on September 25, 1956 with an initial capacity of 36 telephone channels. In 1964 the first trans-pacific telephone cable connected Hawaii to Japan with a subsequent extension from Guam to the Philippines.

Beginning in the 1960s coaxial cables were laid on transoceanic routes using frequency division multiplexing (FDM) to transmit voice signals. Signal voltage required repeaters, which were bidirectional amplifiers periodically spaced along the cable. The first repeaters used vacuum tubes, touted as the most reliable ever made, before being replaced by transistors. While these early cables are no longer commercially viable due to their limited capacity, many have been repurposed to measure seismic movements and other geophysical data.

Nowadays of course coax copper cable has been superseded by fiber optic cable. The first transatlantic fiber optic submarine cable, TAT-8, initially carried 40,000 telephone circuits and began operation in 1988. The use of wavelength-division multiplexing (WDM), made possible by the placement of solid-state optical amplifiers spaced at 40 km intervals along the cable run, greatly increased fiber capacity. TAT-8 carried three pairs of optical fibers — one was reserved for a spare — with a modulated signal of 295.6 Mbps supporting 20 Mbps of data transmission. TAT-8 was retired from service in 2002. Today, improvements in fiber optic glass manufacturing technology allows for increased distance between repeaters, now over 100 km. By reducing the number of amplifiers needed, distortion is minimized and capacity increased. The size of today’s submarine fiber optical cable? Approximately that of a garden hose.

With the worldwide map of submarine communications cables resembling steam pipes emanating from a boiler station, there are hubs placed strategically across the globe. Termini such as the NYC/tri-state area, Miami, Hong Kong, Shantou (China), Fortaleza (Brazil), Chennai (India), Perth, Alexandria (Australia), Maruyama/Chikura (Japan), Bude/Sennen Cove/Skewjack/Porthcurno (UK), Marseille, Djibouti and Al Seeb/Barka (Oman) are some of the terrestial “choke points” found on the worldwide Submarine Cable Map. The data found here is sourced from the Global Bandwidth Research Service and is updated regularly.

Here is an animated video from Business Insider Science depicting all the world’s submarine cables:

But perhaps even more important are terminals located on far flung islands scattered across the world’s oceans. With fiber optic ring architecture, a much more reliable and redundant network topology than point-to-point or point-to-multipoint (aka star), these maritime locations are optimally located to interact among various intercontinental carriers and networks. Locations like Guam, Oahu (Hawaii) and Bermuda are all critical points along ring transoceanic routes. Some islands are also home to hybrid ring-star networks, such as San Juan, PR, which is an intermediary point between North America and the Caribbean.

The first submarine cables were constructed from a protective outer layer of iron, over a layer of India rubber, which covered a layer of gutta-percha (a natural latex) that surrounded a core of multi-stranded copper wire. Steel wire later replaced iron; gutta-percha was used until the 1930s when polyethylene became available. Below is a cross section depicting the layers of a modern submarine communications cable. 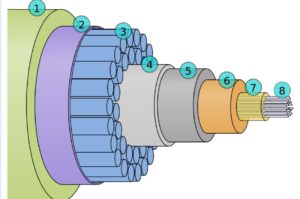 Essential for Worldwide Communications; Faster than Ever

Of course submarine fiber optical is vital to the Internet; it wouldn’t exist without the almost instantaneous speeds light provides. In the past few years, latency has dropped to virtually zero as speeds have surpassed the terabyte per second threshold. According to telegeography.com, “International bandwidth usage doubled in just two years, growing from 146 Tbps in 2013 to 295 Tbps in 2015.” 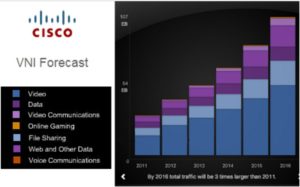 One significant development over the past few years is that content providers have now eclipsed carriers as the biggest users of capacity on the largest routes. Google, Facebook and Microsoft are long-haul capacity boss customers as they further extend their networks across the globe. As they expand, they consume more bandwidth. Capacity is sufficient for the moment but once the Internet of Things hits full stride in a few years, bandwidth on the most widely used transoceanic routes may not be able to meet demand.

While submarine cables are highly reliable, they are vulnerable to a number of hazards, including shark attacks. Trawling by fishing boats, boat anchors and natural disasters (the 2011 Tohoku earthquake wreaked particular havoc) have disabled underseas networks for varying lengths of time. Too, governments and non-state actors such as terrorists have tapped into and/or severed networks. In fact, off the coast of Egypt in 2013, frogmen sabotaged the SE Asia/ME/West Europe 4 cable which connects three continents and travels 12,500 miles. Internet speeds in Egypt dropped by 60% until repairs were completed.