An L.A.-based mobile virtual network operator (MVNO) piggybacking on Sprint’s and (just within the last year) AT&T’s cellular networks in the U.S. and Three’s network in the UK, FreedomPop is a provider of both 4G LTE and free IP mobile services such as data, text and VoIP. They’re also a vendor of mobile devices for use on their network. Their latest service offering is a global SIM providing free mobile data in 25 countries.

In this YouTube video, ‘Beat the Bush’ explains the vagaries of FreedomPop:

Shortly after its founding, FreedomPop partnered with the satcom company Lightsquared (now Ligado Networks) to develop a 4G LTE network in the U.S. integrated with satellite coverage. When plans for the proposed satellite network were derailed by the Federal Communications Commission over fears of signal interference, FreedomPop terminated the partnership.

In October, FreedomPop—now using Clearwire’s WiMAX network—began offering 500 MB of free Internet usage, with excess data costing 2 cents per megabyte. Monthly plans for 2 GB ($18) or 4 GB ($28) were also tendered. Subscribers were required to make a refundable deposit for a USB adapter or a mobile hotspot device to access the FreedomPop network. Consumers of course loved the free allotment of data but chafed at network coverage limitations. By the end of the year, 20% of FreedomPop’s free user base had migrated to paid usage.

FreedomPop expanded its services to include WiMAX home broadband for a significantly lower cost than most cable or DSL providers. Sprint’s subsequent acquisition of Clearwire meant that for the first time FreedomPop was able to offer its free wireless Internet service across most of the U.S. This also marked the introduction of the Overdrive Pro, its first 3G/4G access point hotspot. By October, the company launched free mobile service allotting 200 anytime minutes, 500 text messages and 500 MB of data (actually 200 MB; see Stetson Doggett video below) using refurbished handsets with 4G WiMAX capability over the Android 4.0 platform. Upgrades included 500 minutes, unlimited text and 500 MB of data for $8; $10.99 fetched unlimited voice and text along with 500 MB of data. Another selling point—no contract required. 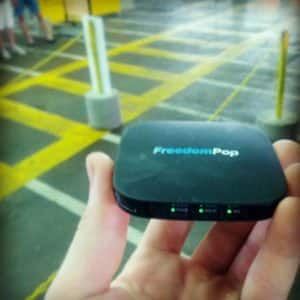 2014 saw FreedomPop selling and supporting Sprint-compatible iPhones with an iOS app offering voice, text and voicemail service for U.S. subscribers. The “Unlimited Everything” plan launched in May provided unlimited talk, text and data on 4G LTE (by now Sprint had decommissioned spectrum serving the WiMAX part of its network) for $20 per month. Once the subscriber exhausts the allotted 1GB, data speed is throttled back to 3G. (In June, this throttling increased to 256 Kbps for subscribers who enrolled prior to June 2015; for subscribers who joined afterward, throttling increased to 128 Kbps.) Also that same year, the company began supporting LTE Android smartphones. Next, FreedomPop made its free 4G data, voice and text plans available for tablet usage, beginning with the Samsung Tab 3 and the iPad Mini. Before the end of the year, the MVNO began selling a branded line of economical smartphones and tablets. 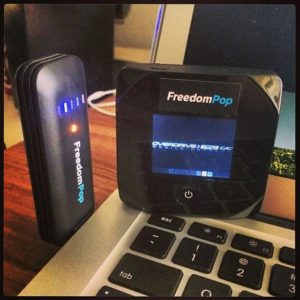 To kick off the new year, FreedomPop unveiled a new nationwide Wi-Fi plan for $5 per month with access to a network of almost 10 million hotspots. First available for Android, it subsequently included iOS devices as well. The plan allows users to connect to the Wi-Fi network through a free FreedomPop app from Google Play. This app automatically connects users to network hotspots—many not available to the public at large—without manually connecting or authenticating the session through a browser.

Also in 2015 FreedomPop began tackling markets outside the U.S. in earnest. First, the company began operations in the UK, offering free mobile data, voice and text with a SIM-only service. Another key strategic foray occurred in November when FreedomPop partnered with Intel to create a Wi-Fi centric smartphone using Intel’s Sofia mobile chipset. With this move FreedomPop began selling its own branded smartphones and tablets that use fixed mobile-convergence (FMC), a technology allowing wireless devices to access both Wi-Fi and cellular spectrum bands and the capability to switch seamlessly between the two without dropping connections. .

Expanding its network on both sides of the Atlantic, FreedomPop in July introduced a “Global SIM,” a roaming SIM allowing free data abroad in both the U.S. and the UK. Now the MVNO has its sights on Latin America and southeast Asia. The planned expansion in southeast Asia is particularly significant, as it encompasses 7 countries with an estimated 230 million subscribers. By comparison, this number is twice as many as the number of wireless subscribers to Verizon.

The “Global SIM” service over AT&T’s wireless network gave subscribers the option of choosing between two networks. According to video blogger Stetson Doggett (whose video take on FreedomPop is below), the AT&T network is a better choice because of its superior coverage, it’s cheaper to use than the Sprint network and offers free roaming in 25 countries with undoubtedly more to follow once the MVNO sets up shop in southeast Asia.

Is FreedomPop Really “Free”? How Free is “Free”?

While using FreedomPop may be free, signing up isn’t. In fact, to be able to actually use FreedomPop gratis, one needs to go through a number of enrollment gymnastics to be assured of “free” usage. Full details are provided in Doggett’s video above; here we’ll merely skim the finer points.

The initial fee for signing up on the FreedomPop-Spring network is $20. For the FreedomPop-AT&T network, the required SIM card costs $10. Both networks require a $10 payment for a FreedomPop phone number. Either way, the subscriber will likely be offered a free trial for the ‘Global Unlimited‘ $20/month plan providing 1 GB of data per month with unlimited voice and texts. However, to do so, you must grant FreedomPop permission to bill you for their global service plan. So, for  free usage, you must downgrade before the end of the trial period. Also, the subscriber must downgrade from the ‘Premium Plus‘ trial as well. Downgrading to the free plan means a somewhat tortuous trip through your online account, reading very fine print and switching off various options.

Remember FreedomPop advertising that their free plan offered 500 MB of data? Turns out that it’s only 200 MB once all the free trials on their premium plans are downgraded to free service.

Should you consider switching to FreedomPop? If you’re a “light” user, meaning you don’t play games or stream videos, and can use another messenger service other than the one provided by the FreedomPop app, it’s worth switching to save money. Note data is limited to 3G speeds—3 meg down, 1 meg up max—with much slower speeds commonplace. Don’t expect more than 1 meg either up or down.

That being said, FreedomPop data speeds are just fine for texting, emails, web browsing and use on basic social media sites such as Instagram, Reddit or Twitter. Essentially, the service is best used for text-based applications. Load times are considerably slower for jpegs and other image content. Music streaming can suffer latency woes and lagging, disrupting playback. And video quality over 3G suffers noticeable image degradation. With a 200 MB cap, try to avoid data use as much as possible. Switch off background apps that surreptitiously gobble data. Also, supplying your own mobile device to FreedomPop is a good idea in light of some quality issues reported with the refurbished products the company sells to its subscribers. If you can’t bring your own device, peruse the FreedomPop catalog of mobile products at https://shop.freedompop.com/products.