Since the first release of the Smart TV, Samsung has developed an extremely sophisticated multimedia and online platform that represents the next generation of home entertainment.

A few years ago, electronics giant Samsung first introduced a new line of LED and HDTVs. The new TVs were designed to meet the changing demand by consumers to enjoy a broad range of home entertainment options, in addition to accessing on-demand programming via the Internet. Since the initial release of the new line of TVs, Samsung has added many new technologies and innovations resulting in a significantly overhauled Smart solution.

The Samsung Smart TV now offers more options than ever for enjoying home entertainment with a new multimedia interface that introduces multiple home screens for extreme functionality. The new razor thin design does not mean that the Samsung Smart TV is low on features. In fact, the opposite is true when it comes to offering a rich selection of features and endless capabilities for programming, staying connected, and enjoying high end home entertainment.


If you are unfamiliar with the Samsung Smart TV, in this article we will highlight some of the functions and capabilities to provide you with an overview of where home entertainment systems are headed within the next few years.

The main standout feature of the most recent Samsung Smart TVs is the completely revamped TV interface. The newly designed platform supports up to five different screens and provides viewers with a rich multimedia and online entertainment experience. When you first power up the Samsung Smart TV, you are greeted with the “On TV” screen which displays image icons that show the last programs you were watching when you turned off the TV. The icons are featured in a reduced version of live TV via the AV input.

Along with the program that you last watched is a convenient list of programming that the Smart TV thinks you may be interested in watching. This list is collected based on your viewing habits and over time, the TV automatically builds a profile of programs you enjoy the most. Additionally, you can set up multiple accounts in which the TV is capable of responding to the viewing preferences of each individual user.

The “On TV” screen also provides you with links to three other screens that increase functionality and add convenience to the viewing experience. The screens include:

Overall, the main purpose of the “On TV” screen is to provide you with quick access to all of the features and information you need to access live programming.

The Samsung Smart TV platform is also designed to help you easily access entertainment on demand. This feature is located to the right of the “On TV” home screen with a menu that is dedicated to helping you access movies and TV shows on demand. The layout of the On Demand screen displays featured programming that Samsung chooses within a specific genre.

You can also take customization of the On Demand one step further by clicking through a variety of movies and television programming and giving a thumbs up or thumbs down to each one. Additionally, you can use your Twitter or Facebook account to enter comments about each movie or television title you are browsing through.

As you proceed with browsing through programming, a list will appear at the bottom of the On Demand screen. The list displays more recommended movies and TV shows that are similar to those you have selected for viewing, in addition to other content that the actors have been in.

When you move to the right of the On Demand screen, you can access all music, videos, and photo collections. This screen gathers all of your collections from all connected sources such as USB storage devices, smartphones, cameras, Microsoft OneDrive, Dropbox, and many other devices and apps.

On the main screen there are icons that display recent music selections you have played with an easily accessible list on the lower part of the screen. The list offers icons that allow you to choose individual movies, music selections, photos, recorded shows. There is even a feature that allows you to access all content in one big list by clicking on the All Content icon.

Scrolling to the right of the music, videos, and photos screen will bring you to the Social Media screen. When you first access this screen you can easily view programming that has been recommended by your friends on Facebook and Twitter.

The content is organized similar to the Movies and TV Shows On Demand screen and displays your friend’s picks, programming that is hot, and selections that have been recommended by your friends. Plus, there is a convenient icon in the lower right hand corner of the screen that displays any recent incoming calls on Skype. The icon also provides you with an easy shortcut for contacting your friends and family using video calling.

Scrolling again to the right will bring you to the last screen which is the Apps Screen that displays all apps that you have downloaded on the Smart TV. You also have easy access to a link that allows you to download additional apps from Samsung.

Overall, the multiscreen feature installed on Samsung Smart TVs provides a lot of convenience but can still use some fine tuning. Some of the menus can become overwhelming and the ability to customize the screens can use some improvements. However, it is a start and an indication of how capable home entertainment has become, leaving a hint of prediction as to where it is headed in the near future.

Other Features on the Samsung Smart TV

In addition to the features built into the multiscreen, Samsung also added functions that are worth noting. These include the new Gesture System, Evolution Kit, and Remote Control.

The Smart TV utilizes an intuitive gesture system that uses the built-in camera to recognize hand gestures. For example, a simple wave of your hand can power up the entire system or a simple swipe of your hand will allow you to browse through the content on multiple screens. This makes it convenient to quickly find what you are looking for without having to press multiple buttons on a remote control.

The following video provides a visual representation of how the gesture systems works.

In addition to the gesture feature, there is also a voice recognition control function that allows you to operate the Smart TV based on voice commands. This system has been greatly improved from previous models and is capable of handling more complex sentences. The voice recognition system also allows you to perform content searches better than in previous models of the Smart TV.

The Evolution Kit is a useful tool that allows you to prepare the Smart TV for future technologies as the TV industry progresses. With the Evolution Kit, you can easily update the Smart TV with a new interface that prepares it for the next generation of features and apps. This is Samsung’s effort to make their new devices future proof to accommodate the rapidly changing technologies in the world of home entertainment.

If you purchase one of the upper end models of the Samsung TV, it includes a brand new remote control that contains a touchpad. The touchpad is surrounded by slider bars that allow you to switch pages with ease. The remote control also has the buttons well placed which makes the device user friendly and easy to understand.

Here is more information on what is being released during 2014 in the world of Samsung TVs.

In August of 2014, Giraffic announced in a news release that Samsung chose Giraffic technology for inclusion in its 2014 Smart TVs and Blu-ray players. The purpose of the technology is to enhance high definition streaming using Giraffic’s signature acceleration technology. The technology helps to eliminate re-buffering issues to improve the streaming media experience on Samsung devices.

The announcement adds another advantage in Smart TVs that solves one of the most current problems in the content industry. It also adds another convenience to the other features and apps we described earlier in this article.

Ultra High Definition, UHD or 4K as it is commonly referred, is a resolution format that quadruples the pixel resolution from 1920 x 1080p to 3840 x 2160. During 2013, Samsung only had a few models with Ultra High Definition and is introducing a few more during 2014. The company is also planning to offer UHD movies that you can purchase on HDD from Paramount and 20th Century Fox.

In 2014, the key models to watch for are the Samsung UH9000 and the U8000. Both models are available in 55 and 65-inch screens however, the 9000 differs from the 8000 in that it sports a Ultra High Definition curved screen. The U8000 model is equipped with 1920 x 1080 high definition resolution with both models offering the new depth enhancement engine and improved color performance. This is a good sign that Samsung is going to have another successful year with Smart TVs during 2014. 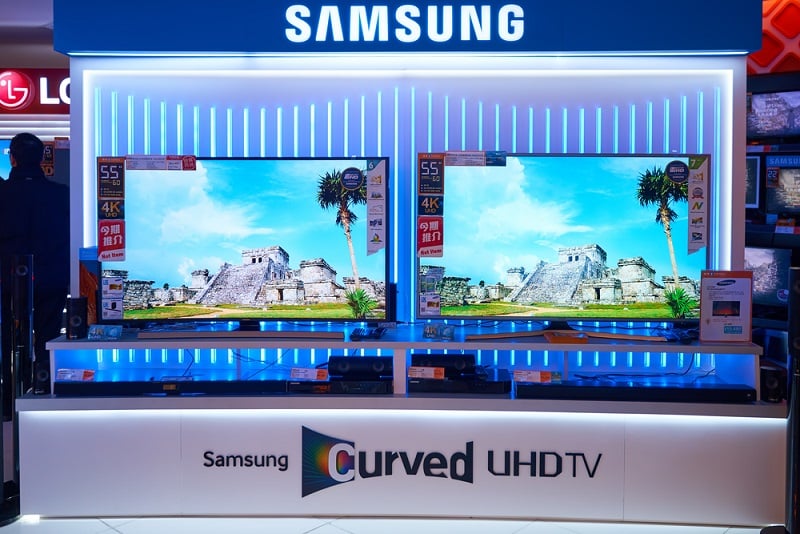