Full disclosure—Your intrepid blogger is partial to Android and Windows when compared to Apple and iOS but is well aware of the hardcore brand loyalty Apple users have toward their pet products. In fact, he almost lost a friendship dating back decades because of a few careless and disparaging words made about Apple.

So, not being a frequent iOS user, he was somewhat surprised to discover that Apple is notorious for limiting storage space on their devices. That’s right: iPads and iPhones don’t have USB or SD ports.

Essentially, you get what you see with Apple phones and tablets. In the past, if there wasn’t enough GBs on your device, tough toenails—you were obliged to upgrade to a device with more fixed storage.

More Than One Way to Peel an Apple

Today Apple users have a number of choices to add memory to their iPhones or iPads. One, of course, is a cloud storage service like Dropbox but that requires an Internet connection. Essentially there are two standalone options for local storage: wireless media hubs and plug-in storage. The latter can either be a flash drive or a hard drive (Mac laptops do have a number of built-in interfaces) providing a fixed amount of storage. Or it could be a memory card reader storing SD or micro SD media. (Secure Digital or SD is a “non-volatile memory card format developed by the SD Card Association [SDA] for use in portable devices.”) Typically, neither is a permanent accessory; they can be added and accessed as needed.

In a tacit acknowledgement of their mobile devices’ limited storage, Apple introduced the Lightning to SD Card Camera Reader for users to download photo and video files from a digital camera to an iPhone or iPad.  After inserting a SD card into a reader, an iPhone or iPad automatically opens the Photos app and organizes the files into “Moments,” “Collections” and “Years.” The iCloud Photo Library safely stores files in iCloud. This card reader can transfer data at up to USB 3 speeds on iPad Pro and up to USB 2 speeds on all other iPhone and iPad models.

There’s also the iPad Camera Connection Kit but be aware that it only works with legacy iPads (1-4) with a 30 pin connection port— which precludes the iPad mini. Note it doesn’t support an external hard disk and it doesn’t work with the iPhone or the iPod. For those who don’t want USB cords to connect to their devices (and who does?), Wireless SD Card Readers such as the RAVPower Filehub create a secure wireless bridge that streams music, video and photos to laptops, tablets and smartphones for a very affordable price. Note that it works with other platforms besides iOS. 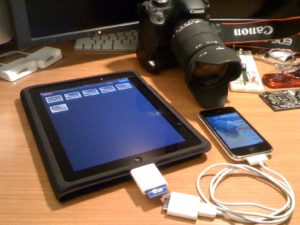 Wireless media hubs, compact devices consisting of USB drives and SD cards, permit users to add external storage. These handy gizmos facilitate video, music and photo streaming, etc., to mobile devices. It also allows the user to liberate precious memory from a device’s limited storage with the transfer of  videos and images to higher capacity external drives and/or memory cards. Some hubs can charge your mobile device or serve as mobile routers. Here’s a look at a few of them:

This multifunctional device allows the user to copy data between the SD card and the USB drive as well as the transfer and/or streaming of data between the SD/USB and mobile devices. Transfer rates are speedy at 9.05/6.65MB per sec (40MHz). Moreover, it serves as a power bank (5200 mAh capacity) with output up to 2 amps and as a portable wireless router. Works with both Android and iOS. This is a road warror’s godsend: see the video below:

The MediaShair has all the capabilities of the device above except it has the capability to stream simultaneously to 7 devices instead of the 5 available with the Wi-Copy. Products like these are indispensable to the business traveler and to leisure trippers who want to stay connected to the Internet while enjoying media downloaded from home. Compatible with both iOS and Android devices.

This pricey model has even more bells and whistles than the previous two products. (There is a more basic version available which lacks internal storage.) It has a more powerful battery (6700 mAH), 64 GB built-in storage and uses the latest IEEE 802.11ac Wi-Fi standard. (Note that the video below says 802.11n.) Compatible with iOS, Android and Amazon devices. Works with external hard drives (HDs) as well when streaming videos, depending upon HD size and power requirements. Some users report that 1080p or 4K UHD content doesn’t stream with the Kingston and that it only supports HDs up to 2 TB in size. From here it looks as if the file transfer speed is slower than that of the WiCopy and unlike the MediaShair it streams simultaneously to a max of two or three client devices. See Lon Seidman’s review of the Kingston below.

CNET blogger Rick Broida reports that in addition to using external storage devices, iOS users can employ a couple of other acts of legerdemain to free up space on their iPhone. One is to delete the Facebook app, which saves 500-600 MB and improves battery life as well. Another is a so-called “storage hack” that frees up anywhere from a few hundred megabytes to a few gigabytes. It’s not “jailbreaking,” it doesn’t void your product warranty and it’s totally legal.